Only in the highly complicated, very fraught and still-so-sexy marriage of James and Tasha St. Patrick can a middle school Career Day serve as foreplay.

Yes, I’m well aware that other big things go down in Season 3’s penultimate episode of Power — a significant death, a twisty murder plan, a triumph over two annoyingly arrogant pretty-boy club owners — but all I can focus on is the sweet, hot lovin’ that takes place toward the end of the hour. Tasha — Tasha, for goodness’ sake, of all people! — should know better than to hit the sheets with her unreliable, AUSA-banging estranged husband. And he should respect her ride-or-die-ness by not making her Angela’s stand-in. Yet here we are.

Let’s review the major happenings in “I Call the Shots.”

YOU GUYS WANNA BE ALONE? | Tommy surprises Ghost by freely admitting he was at Milan’s warehouse the night before — remember? When Ghost spied on him? — but doesn’t really mention it to his friend when Milan starts calling Tommy his “apprentice.” What’s more, Milan totally knows that St. Patrick is up to some shady stuff; he warns Tommy that “Ghost is an attachment, and attachments are bad for business if you want to stay alive.”

Which leads Tommy to confront his pal about how they really need to have each other’s backs, aka Ghost better stop screwing around and trying to unseat Milan. “I chose you over Holly. This time, mother—ker, you need to choose me,” Tommy warns him. “I do. I choose you. I’ll leave it alone,” Ghost replies. Anyone else feel like that scene was way more intimate than any of the times we’ve seen Ghost strip Angela to her skivvies? I’m not talking romance, I’m talking intensity and naked emotion, and Omari Hardwick and Joseph Sikora are bringing it right here.

Anyway… Ghost suggests that Tommy run point on a meeting between Milan and Ruiz to smooth things over regarding Ruiz’s refusal to pay up front for the designer drugs. And the minute that Egan is out the door, Ghost contacts Ruiz to “make the call now.” Because of course he was lying to his best friend in the universe about being transparent. Transparency is for chumps!

BRING YOUR CRIMINAL TO SCHOOL DAY | Ghost then skips off to Tariq and Raina’s school, where he’s speaking at a Career Day presentation organized by Tasha. The kids think he’s great. An irked ‘Riq spends his time texting “Slim” — aka Kanan — to hang out later. And when Ghost gives an in-depth, seemingly heartfelt explanation of how his family has suffered as he’s worked to become a high-level nightclub owner, Tasha’s metaphorical panties start their slow yet steady descent.

Speaking of working hard to keep the club going, Ghost just happens to be at his rivals’ venue — as is hotelier Karen Bassett —  during a big party when the cops raid the place and find lots of drugs sold and stashed on the premises. The rival owners are flummoxed as they’re handcuffed and led away; turns out, Ghost and Tommy made their quota for Milan by selling in the rival club instead of Truth — and Julio stuffed a whole bunch of illicit substances up in the ceiling for the police to find.

YOU’LL DO | With his competition vanquished, Ghost returns home to compliment Tasha on her successful Career Day; she’s impressed with how he handled getting back into Bassett’s good graces. “No matter what, I’ll always protect you and the kids. You are my family,” he tells her, and then they’re kissing, and then he’s hooking her up with a new connect… if you get me. (Side note: Naturi Naughton is ALL IN on this scene, and it is quite a thing to behold. It’s easy to forget, given Ghost and Angela’s frequent flesh sessions, that Tasha is just as big a freak. Consider yourself reminded. Not to mention after the act, her reading of the line, “It ain’t us getting back together… is it?” has about 30 emotions stuffed into eight words. Nice job.)

But when she learns about Ghost’s plan to use Ruiz to mess with Milan, she kicks him out and then calls Tommy ASAP. Tasha is understandably worried about Milan’s threats to come after her and the kids if Ghost doesn’t lay off; Tommy is shocked to hear that the man who promised not to play any more games never stopped doing so. 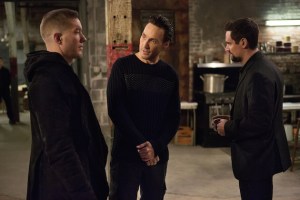 VAYA CON DIOS | While all of this is going on, Ruiz and Milan have a little confab that ends well — though Milan’s unaware that Ruiz is wearing a wire, supplied by Greg. After the meeting, Tommy dismisses Ruiz’s driver and opts to take the primera home himself… so he can stab him to death under an overpass, then leave him in a stolen car provided by Dre. “This ain’t me doin’ this to you. It’s Ghost,” Tommy says as he pushes the blade into his colleague’s belly, then takes off. But I’m pretty sure that recorder was picking up everything that was said the whole time — including when Tommy referenced killing Lobos with Ghost.

Back at the Assistant United States Attorneys’ office, Mike Sandoval gets a report informing him that Hugo — Lobo’s associate, with whom Mike was in frequent contact — has turned up dead. So Sandoval puts on a baseball cap (ooh, no one will recognize you in that!) and runs to Hugo’s apartment, where he cleans out any trace of evidence that they knew each other. Only Greg, who found the burner phone while snooping in Angela’s bag and traced its sim card’s purchase to a bodega near Hugo’s apartment, happens to be in the neighborhood and sees his co-worker coming out of the building. Oops.

WAIT, WHO’S KILING WHOM? | When Ghost and Tommy talk later, Egan wastes no time confessing/bragging that he murderer Ruiz. Ghost is thrown, saying he needs more time to come up with a different plan for getting rid of Milan. “No,” Tommy responds. “If we’re gonna do this, kill Milan? I call the shots.” But when he later meets up with the cannibal and his gang, Tommy sings quite a different song. He reassures the Eastern Europeans that he’s one of them, then announces that “we need to kill Ghost.” Twist!

Now it’s your turn. What did you think of the episode? Got predictions for the season finale? Sound off in the comments!