Angela, honey, please tell me that this is all part of your bigger plan.

Because if not, this week’s Power — in which you sleep with your stalker/accuser Greg again — is a real low point for you. And that nadir is reached without knowing that even more troubling developments are afoot.

Milan seems to be succeeding in driving yet another wedge between Ghost and Tommy. LaKeisha discovers she’s been played. Kanan has an oblivious Tariq in his nefarious clutches. And even the normally unflappable Tasha seems worried about how everything is going to shake out.

Let’s take a look at the action in “Trust Me.”

TOMMY BEING TOMMY | Tommy wakes up at Milan’s, achy, bruised and stymied that the crime boss will allow him to walk out of there a free man. Later, Egan doesn’t say anything to Ghost about the beat-down he received, but he has plenty to say when Ghost asks him to help ferret out Hugo’s contact inside the Assistant U.S. Attorneys’ office. When Tommy refuses, Ghost points out that it’s in their best interest to help clear AUSA Valdez of suspicion: “She goes down, we go down with Angela,” he reminds his pal.

So the pair lure Hugo to a meeting and ambush him, planning on torturing him until he gives up the name of his AUSA mole. But when Hugo goads Tommy about mourning the death of Bella the dog — and makes the mistake of mentioning Holly’s name — Tommy goes mental and empties his gun’s clip into Hugo’s chest. As Ghost expresses his disbelief that Tommy killed their only lead, Tommy takes off and Ghost nabs the dead man’s cell phone.

THE WIRE | Later, MJ (the female agent from the Office of Professional Review) swings by Ghost’s office at Truth and offers him immunity if he’ll testify that Angela gave him info that led to Lobos’ death. “You’re a smart man,” she says. “It’s a smart play.” But he pretends not to know what she’s talking about.

Meanwhile, Angela visits both Tasha and Tommy’s mom to warn them that their alibis for the day Lobos was killed better be airtight in the extreme. When Tommy runs into Ghost’s ex at Kate’s place on Long Island, he (correctly) warns her that she’s gotta calm down, because her frantic actions could very well draw even more attention to her/Ghost/Tommy/etc. (Side note: I did, however, love this interaction between Ghost’s women. TASHA: “Ain’t you got a job?” ANGELA: “I do. Putting murdering drug dealers in jail. What do you do?” Bam!)

When MJ visits Angela, she suggests/threatens wearing a wire to set Ghost up. But Angela realizes the OPR has nothing concrete on her. “I’m not your leak,” she says, “but trust me: If I could prove to you that [Ghost] was guilty, I’d serve him up to you on a goddamn platter.”

Still, that doesn’t stop Angela from wearing some hidden surveillance equipment when she meets with Ghost — who has seen her with Greg and is NOT HAPPY about it. He hands over Hugo’s phone and suggests that she use it to figure out which AUSA he was calling.

Oh, and about Greg? Angela arrives at his apartment door wanting to show him the security video of Ghost and Tasha at the hotel. She plays it like she went looking to nail Ghost and found this video, which makes her feel stupid, but there’s definitely more there. So when he kisses her and she says she should go… did anyone really think they wouldn’t end up in bed? (Though having her stare at the photo of Ghost on Greg’s Carrie Mathison Wall O’ Crazy while they were making the AUSA with two backs was a nice touch).

Later, as Angela ponders the phone Ghost gave her, Greg texts Medina that he suspects she is working with St. Patrick and that “we can get them both.”

SEE YA, SHIN | When Tommy impresses Milan with his distribution plan for a large amount of high-end, name-brand pills, he’s put in charge of briefing the top-level distributors on how and where they’ll sell them. This meeting — which includes Ruiz, Shin and Father Callahan, among others — is news to Ghost, who finds out about the confab moments before it commences right inside Truth.

The primeras balk when Tommy announces that they’ll have to pay for the new drugs up front, and Shin is so angry, he blurts out that he’s pretty sure Tommy killed his son. (We all know it was really Ghost.) Quicker than you can say “Nice knowing you, C.S. Lee!,” one of Milan’s men shoves a knife into Shin’s neck and then carts his dead body out of the building. Ghost looks gobsmacked. Later, Tommy reminds his friend that they have to toe the line in order to figure out how to best Milan at his own game. And when Tommy Egan is the voice of calm reason not once but twice in an episode? Time to worry, indeed.

MILAN’S MIND GAMES | Ghost busies himself with finding out all he can about the cigarettes Milan and his men smoke; he learns they are illegally imported and sold under the counter at a few bars, so Ghost makes sure to start drinking at those establishments in order to glean more info. (He doesn’t share this plan with either Tasha or Tommy, which will become troublesome in a moment.) 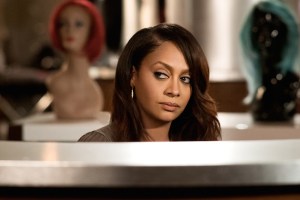 At the same time, Milan meets with Tommy and… pardon me if I’m distracted, but Milan is eating a stew that I’m really, really hoping is made with cow (aka not human) marrow bones. Anyway, Milan has visited LaKeisha’s shop to warn Tasha to tell Ghost to back off — leading a hurt and betrayed LaKeisha to figure out why her friend has such a sudden interest in her business — and now Milan wants LaKeisha dead. And he wants Tommy to do it. Milan also talks a big game about how Tommy’s connections are causing him pain, and that to be truly free, he’d have to sever all those relationships.

It all comes to a head when Ghost follows one of the bar owners while he makes a shady delivery to Milan’s warehouse… and sees Tommy (who’d previously disavowed any knowledge of Milan’s headquarters) show up at the same time. Thing is, Ghost also lied when he told Tommy he had no plan regarding their new boss. But it seems we may have taken a step backward in their renewed relationship, eh? Also important: Did Tommy kill LaKeisha? We saw him show up at the shop… then that was it.

DADDY DEADLIEST | Using some intel from Dre, Kanan shows up while Tariq is playing basketball and befriends him. He uses all of that gross charm to suss out what school the kid attends and when he usually gets out of class, and then Kanan just happens to be there when ‘Riq leaves class the next day.

The pair go back to Kanan and Ghost’s old neighborhood, where Kanan gives the teen Texas Tea and brings him up to the old lady’s apartment, which apparently used to belong to someone Ghost maybe (?) killed back in the day. Kanan is about to dispose of his enemy’s son in similar fashion… until the boy says he hates his father. Seeing an opportunity to turn Ghost’s kid into his ally, Kanan commiserates that St. Patrick “turned his back on me, too” and assures Tariq “you can trust me, little man.” Oof. All of this Tariq stuff kills me, because you just know that half the reason he’s responding so strongly to Kanan is because Kanan is showing an active interest in him. Oh Tariq, you poor little male-role-model-starved muffin.