Hard to say who’s scarier in this week’s Power: Milan, who shows up uninvited and charms his way through dinner with Ghost’s wife and kids, or Angela, whose despair over being so unceremoniously dumped hardens into a flinty fury when some higher-ups start eyeing her as the Lobos leak.

Either way, it’s not a good week to be James “Jamie” “Ghost” “Oh good God how am I gonna get out of this one” St. Patrick — and that makes for a very intriguing episode of the Starz series. Usually, when Ghost is smoothly putting out all the small fires that come along with being a former drug dealer/club owner/estranged husband/boyfriend/father, the show is entertaining. But when he walks around, looking like he might throw up because someone’s clearly smarter than he is and has outwitted him several times in the hour? To use the show’s parlance, that’s some good s–t right there.

Read on for the highlights of “Don’t Go.”

DREAM DECEIVER | Ghost dreams of Angela, who tells him she understands that he broke up with her to keep her safe. (Side note: Ghost’s subconscious has some excellent taste in lingerie. What is that Angie’s wearing, La Perla?) Meanwhile, Real-Life Angie is very much awake and sobbing to Paz that she doesn’t understand Jamie’s sudden about-face regarding their relationship. “I compromised myself to be with him,” Angela cries, saying she doesn’t even recognize herself anymore.

But the pity party is cut short when one of Angela’s colleagues shows up to bring her (and her laptop and cell) into work: The Office of Professional Responsibility is there, and they’re searching for the leak that led to Lobos’ escape. 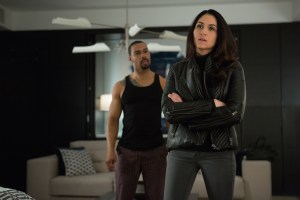 THE HUNT IS ON | The two OPR staffers say that it wasn’t a mistake that Lobos’ whereabouts got out: His burner cell called a burner cell in the Assistant U.S. Attorneys’ office, which means that everyone on the task force — including Mike Sandoval, to his great surprise — is a suspect. “One of your people is dirty, David,” the OPR lady named MJ tells Collins. “I’m gonna find out which one.”

So Angela, Sandoval, Greg, Saxe and the rest of the task force undergo a day of rigorous questioning. The upshot: Greg repeats yet again that he thinks Angela is the leaker. Sandoval plays it too cool upon hearing about Lobos’ death. And when MJ suggests that James St. Patrick used Angela to get the information he then put into play to help Lobos, Angie angrily counters, “He didn’t play me. I played him” and adds that everything she’s ever done, whether “ethical or in the gray” has been “to mount Lobos’ head on a wall.” Not long after, the OPR officials let her go — but then agree among themselves that they need to talk to James St. Patrick.

GHOST’S DILEMMA | Meanwhile, Ghost is in a pickle: He’s promised Karen Bassett and her dad the money to invest in their hotels, but Milan is requiring a hefty cashier’s check by the end of the day or else. Oh, and Milannibal the Cannibal has a few other demands, as well: Ghost will sell his product in the clubs and in Bassett’s hotels, and Tommy will kill his priest hook-up because Milan doesn’t like the gun-running company the holy man keeps.

Ghost tries to get the money from both Tommy and Tasha (via the kids’ trusts), but neither will budge. And when the Bassetts won’t give him an extension on the time frame, it looks like the St. Patrick hotel expansion isn’t gonna happen. Irked, Ghost puts Operation Take Down Milan into play, starting by having Dre call the cops with an anonymous tip about Tatiana, aka the waitress Ghost is sure was murdered earlier in the season.

So imagine Ghost’s surprise when Milan (in his Dean guise) — and a very much alive Tatiana! — show up for dinner with the family at Tasha’s apartment. Milan makes it clear that he can get to Ghost’s family anytime, anywhere. And realizing how thoroughly he’s screwed, Ghost hands over the cashier’s check like the whipped puppy he is.

Later, Angela comes to Jamie’s apartment to demand that he help her prove her innocence. But he says he has no idea who provided the information about Lobos’ location — which, as far as I can remember, is true, right? But that answer won’t appease Ms. Valdes, who angrily tasks him “Find out!” as she stomps out the door. 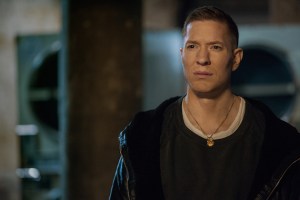 TOMMY FINDS OUT | If you’re wondering where Tommy is during all of this, he’s reeling from Tasha’s inadvertent admission that Holly was pregnant. The news — which Tasha doesn’t even realize is news to her old friend — hits Tommy like a rush-hour train. We see him in the confessional, warning Father Callahan to stop selling guns. And when the man of God refuses at first, Tommy makes it clear he’s got his gun out and cocked. “Let me save your life, father,” Tommy says, clearly upset. “Let me do this one good thing.” Callahan quickly acquiesces.

Later, while Tommy drinks and weeps at Holly’s makeshift grave, Milan’s men grab him, taze him, bring him to a warehouse, strip him and beat his kidneys into a fine paté. When the boss calls his guys off, it’s clear that Tommy isn’t putting up a fight because he’s got nothing to lose — and Milan realizes that makes Egan a much more interesting asset than he originally thought.

STRANGER DANGER | Did I mention that Kanan sweet-talks an elderly woman into letting him into her apartment, then savagely knocks her down and suffocates her with a “Jesus Saves” throw pillow? Because that happens, too — part of the felon’s plan to remind Ghost of their past. (Based on the bullet still lodged in the wall, I gather something rather big from their shared history went down there.)