The first volleys of the Battle of Culloden have yet to be fired, but that didn’t stop Outlander from dealing one of its main characters a bloody death in Saturday’s season finale.

Dougal MacKenzie, Jamie’s headstrong and bloodthirsty uncle, met his end when Fraser himself (with a little help from Claire) pushed a blade into his chest. Dougal’s death came after he’d walked in on the Frasers talking about poisoning Prince Charles, aka the only way they could think of stopping the carnage Claire knew would happen if the skirmish against the British took place.

Appalled at what he viewed as pure treason, Dougal said some verra terrible things about Jamie and his wife, then decided that he had to take both of them out in order to save the Jacobite cause. The unfortunate culmination of all of this? The Clan MacKenzie war chief, dead on the ground, while a shocked Jamie and Claire tried to figure out next steps.

TVLine talked with Graham McTavish about his hotheaded character’s untimely offing, shutting it all down in co-star Gary Lewis’ final episode and more.

TVLINE | Dougal seems the most personally invested in forwarding the Jacobite cause, yet he’s also the one who gets smacked down every time it seems like he’s about to have a win.
This season, particularly, with the return of Jamie to Scotland and all that follows, the fact that Jamie has clearly become a leader of men in his absence from Scotland — he went away as a headstrong youth, and he came back as a proper, pure man — and I don’t think Dougal was expecting that at all. What Dougal is thinking about more than ever is that finally the prize is within grasp. He can see it. He can see Bonnie Prince Charlie back, he can see the Stuart monarchy returned. All of those things are within reach. So at this point, he is smacked down constantly. He has to suck it up with Jamie in front of the men. He has to take second place to him. He gets insulted by Claire. He takes himself to the one side, and has a little word with himself about his ego and vanity and says, “Just put those things to one side, for God’s sake, until we finally get this.”

I don’t think for a moment he thinks they’re going to lose. That’s what makes the final episode — that confrontation with Jamie, the knowledge and the understanding that Jamie and Claire are planning murder — so awful. That is his world crashing down. I think there’s an actual line when he refers to that, that this is the end of his life, as far as he’s concerned, when he finds these things out…. He’s going to kill Jamie, albeit reluctantly, and he’s going to kill Claire, because she has confirmed all of the things that he ever suspected about her. In the back of his mind are his desire for her, how intrigued he is by her, how dazzled he is by her, all of those things. But at the end of the day, he’s always thought something is not quite right about this person.

TVLINE | How much do you think that Colum designating Jamie as Hamish’s guardian — despite the fact that Dougal is the boy’s father — informs Dougal’s motivations regarding Jamie in that final scene?
You would be inhuman not to feel a sense of resentment at that moment, but I think mainly it’s towards his brother. It’s disbelief. I genuinely don’t think Dougal can understand. He doesn’t seem what Colum sees. Colum sees a loose cannon, he sees somebody who would lead the clan into disaster, and Dougal sees the opposite. There’s no question that he thinks he’s the best man for the job. He would resent Jamie, but I think it’s a terrible personal blow to him, and it would be an enormous sense of hurt which leads into that final scene with Colum when Colum’s dying… and the worst part is that he dies! So he doesn’t even get a chance to tell him, even if he hadn’t been killed at the end, even if Dougal had survived, he would be forever in a prison of his own making. 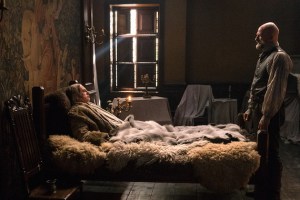 TVLINE | Talk to me about shooting Colum’s death with Gary in “The Hail Mary.” Were you guys both affected? What was the mood like when you were shooting that scene?
Oh, yeah. It was great day, and those are the scenes that any actor wants to play, but you certainly have to dig deep emotionally. In my case, I very much referenced my own father and the relationship that I had with him. There’s a very Scottish element to it. These are hard men. These are not men who are given to massive displays of emotion, weeping, hugging, and all the rest of it; that was very much my own experience in Scotland. They’re an emotional race, but they’re also very tough people. I tried to bring that to play in the scene, and it was the very last scene I shot, and it was Gary’s last scene, our last day, so it was doubly affecting for that reason

The weirdest part about it, actually, now that I remember, is when we shot it they had to go to a different location, a different set, to continue shooting. So quite literally, the show went on. It just carried on, and we were left, me and Gary, in a room with a bed. It was so symbolic when I look back on it. As soon as we’d done it, they we’re like, “We’re happy with it, we’ve done it,” and they turned the lights off because they had to move the lights. So quite literally, the lights went out on Dougal and Colum. They were just, click! Gone. It was like “OK, find our own way out. Don’t let the door hit you in the ass.” [Laughs]

TVLINE | When I spoke with Stephen Walters, he mentioned that if Angus had made it to Culloden, he would’ve been at the front of the charge. How do you think Dougal would have faired if he made it to the battle?
What a great question. Him and Angus and Rupert and Duncan [Lacroix]’s character Murtagh would have pushed themselves to the front, definitely. They probably would be a bit argy-bargy, pushing people out of the way so they could be at the front. They would have gone completely mental… I don’t know whether they would have survived, sadly probably not. It was a very, very nasty battle, and a lot of the atrocities committed afterwards were pretty terrible, but Dougal might have survived. He’s just the kind of guy that would be able to crawl off the battlefield and find a horse, get to a little cottage, meet a nice, new woman that he took shine to, and then went off to some island to live there. [Laughs] Who knows? I’m going to go with that one.