The scenes set in Outlander‘s grimy, emotionally gutted Jacobite army encampment in last Saturday’s episode drove home an important visual point: Paris, with all of its stunning silks and satins, is very far away indeed.

Much has been made of the dazzling looks — particularly that showstopper of a red dress — that series costume designer Terry Dresbach and her team put together for the Frasers’ sojourn in France. But equally important (and just as stringently researched) are the clothes that Claire, Jamie and the rest of the cast wear at the season’s end in Scotland.

“At the end of the day, I always tell people — usually the people I work with — ‘Costumes don’t do tricks. Costumes aren’t angry. Costumes aren’t sad.’ What you do is, you give the actor this foundation from which then they [create],” Dresbach tells TVLine. “The more accurate we are in our costumes, the better the actors are served in their own comfort.”

At TVLine’s request, and in advance of the 90-minute season finale (July 9, 9/8c), Dresbach walked us through a few small-but-important details you might’ve missed from the season’s penultimate episode, “The Hail Mary.” Click through the gallery below for the scoop on Claire’s outerwear, Colum’s innerwear, Black Jack’s leisurewear and more. 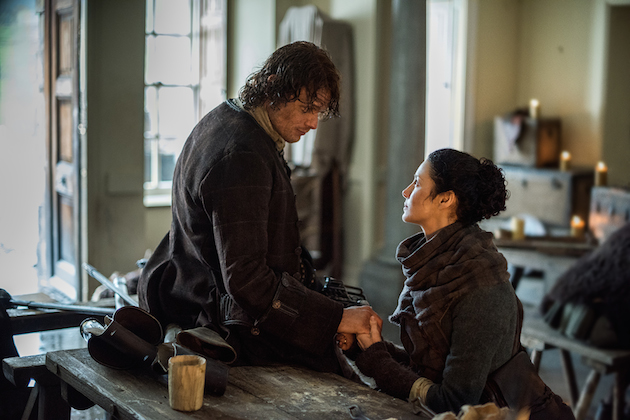