Question: Will Once Upon a Time pick up right where they left off in the finale (like, is it the next day after Jekyll and Hyde come to town)? Or will there be a few weeks where the town is normal — the “calm before the storm,” so to speak? — Shannon
Ausiello: The answer is A) not the next day nor B) weeks later but C), Season 6 will open just moments after Hyde arrived in Storybrooke and ominously greeted Regina. From there, says co-creator Adam Horowitz, “What the Untold Stories characters are, what their whole deal is, is something we’ll explore.”

Question: I am really excited for the next season of Once Upon a Time, and my question is: What new characters will we meet besides Hyde? — Iris
Ausiello: In addition to the previously scooped Sinbad and Scheherazade, the ABC series is casting for the premiere the role of Morpheus, as in the Greek god of dreams (versus, you know, Laurence Fishburne in The Matrix). He is described as “an old soul in a young body,” someone who is equally good at reading people as he is at hiding his own agenda.

Question: Hello, longtime follower of yours. I am a huge Gilmore Girls fan and was hoping you might have some new and juicy revival information. At the very least maybe a release date? Thanks a ton. — Amy
Ausiello: Unconfirmed reports put the revival’s release at either the Tuesday before or the Sunday after Thanksgiving. I have no idea if either date is true, but the former makes a lot more sense than the latter. I mean, why would Netflix drop the four movie-lets at the end of a four-day weekend versus at the start? Of course, none of this really impacts me since I’ve already seen them all. I’ve also already read the Game of Thrones Season 7 premiere script and glimpsed the first 14 minutes of Star Wars: Episode VIII: Fall of the Resistance, so I think we can all agree I’ve come a long way since interning at As the World Turns.

Question: I just binge-watched all six seasons of The Walking Dead and now I’m going through withdrawal. Do you have any scoop? Any at all? — Jon
Ausiello: Isn’t asking if I have scoop like asking a walker if you look tasty? The answer is always yes! Episode 6 will introduce two new characters who don’t sound to me like anyone in particular from the comic-book series. (Correct me if I’m wrong — and we both know you will.) Naomi is a grandmotherly type who, having lost so many loved ones, is now willing to do whatever it takes not to have to bury any more. (Maybe she’s being introduced to counsel Carol about the awful necessities of the post-apocalyptic world… ) On the flip side is Jennie, a sunny-side-up kinda teenager — oh, Caaarl! — who sounds a lot like Beth 2.0, “kind, with a world-weary toughness.” 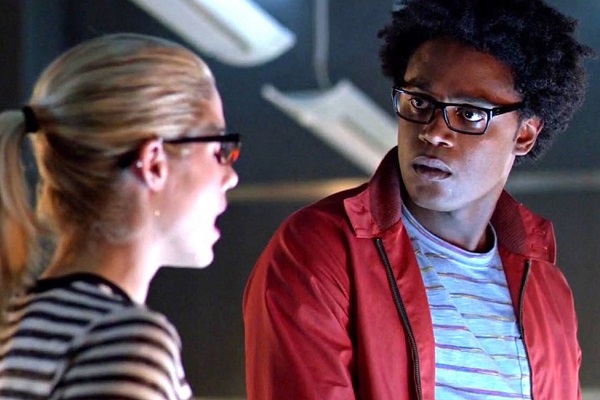 Question: Do you have any scoop about Arrow? —James
Ausiello: If you’re wondering how Curtis will play a larger role in Season 5 — now that Echo Kellum is a series regular — but without duplicating Felicity’s efforts, Wendy Mericle laid out the difference for us. “Essentially, if she’s software, he’s hardware,” the EP explained. “As he evolves into becoming Mr. Terrific in Season 5, one of the things we’re really exploring is differentiating them by having Curtis be more like Cisco on The Flash. We want him to be a bit more hands-on, a little more about building physical tech.”

Question: Any Vampire Diaries scoop? Dying to know what we should be calling that thing that turned Damon and Enzo evil. –Jake
Ausiello: Wouldn’t we all, Jake? I can’t give you that information right now — it’s locked up in the vault, so to speak — but I can tell you about a new face we’ll be meeting in the first episode of Season 8. The show is currently casting the recurring role of Sybil, “an immortal who uses her immeasurable power and influence to control other people, manipulating them into twisted games and tests for her own amusement and glorification.” Time will tell whether she proves to be a friend or foe, but given this show’s penchant for sympathetic villains, it could also be fair to assume she’ll be a bit of both.

Question: I will take anything you can give me on the Outlander finale. —Vivian
Ausiello: Pretty much every scene of the finale contains a spoiler, but I can tell you that you will meet Roger and Brianna very soon after the extended episode begins, and that Richard Rankin and Sophie Skelton don’t disappoint in the series-crucial roles. 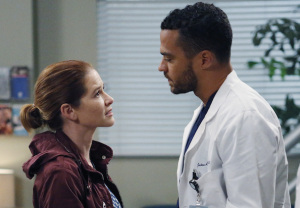 Question: Any chance the baby will bring Grey’s Anatomy’s “Japril” back together next season? —Kimberly
Ausiello: There’s always a chance, Jesse Williams recently told TVLine’s Vlada Gelman. But “it’s day to day with Jackson and April. They can have a very civil, mature conversation one moment, then be at each other’s throats [the next], because real life is like that. We carry frustrations and baggage and grudges.” And at the same time, the underlying attraction isn’t diminished. So the exes “can fight and then have sex in the same scene,” the actor laughs. “It’s a very passionate relationship with a lot of history behind it.” Whether it also has a future in front of it remains a big ol’ question mark.

Question: Do you have any scoop on Supernatural Season 12? —Tyana
Ausiello: You mean this wasn’t enough?! Um… the Oct. 13 Andrew Dabb-penned premiere is titled, “Keep Calm and Carry On.”

Question: Will we see Rick (Luke Macfarlane) on the third season of The Night Shift? I need to see him with Drew, not just hear his name dropped every now and again! —Valentina
Ausiello: Affirmative. Macfarlane reprises his role for several episodes beginning Aug. 3, when Rick and Drew attempt to adopt a 14-year-old patient who has spent much of his young life in and out of foster care.

Question: Is this the season that Suits fans finally get to see some romantic Donna/Harvey action? —Lori
Ausiello: With Mike having just set foot in prison and the firm’s partners working OT to keep the lights on at Pearson Specter Litt in the wake of the mass exodus, “We’re not going to dig too much into emotions between [Donna and Harvey],” Sarah Rafferty told Matt Mitovich at the Season 6 premiere event. “They’re really busy working s—t out, and they’re not going to have their confusing relationship status get in the way of their goals.” Cupid’s arrow might find its way to Louis, however, and when it does…. “I have always said that if I need a wingman, I would pick Donna,” Rafferty smiles. “She’s the superhero of wingmen, so she gets to put on her cape and help him out.” 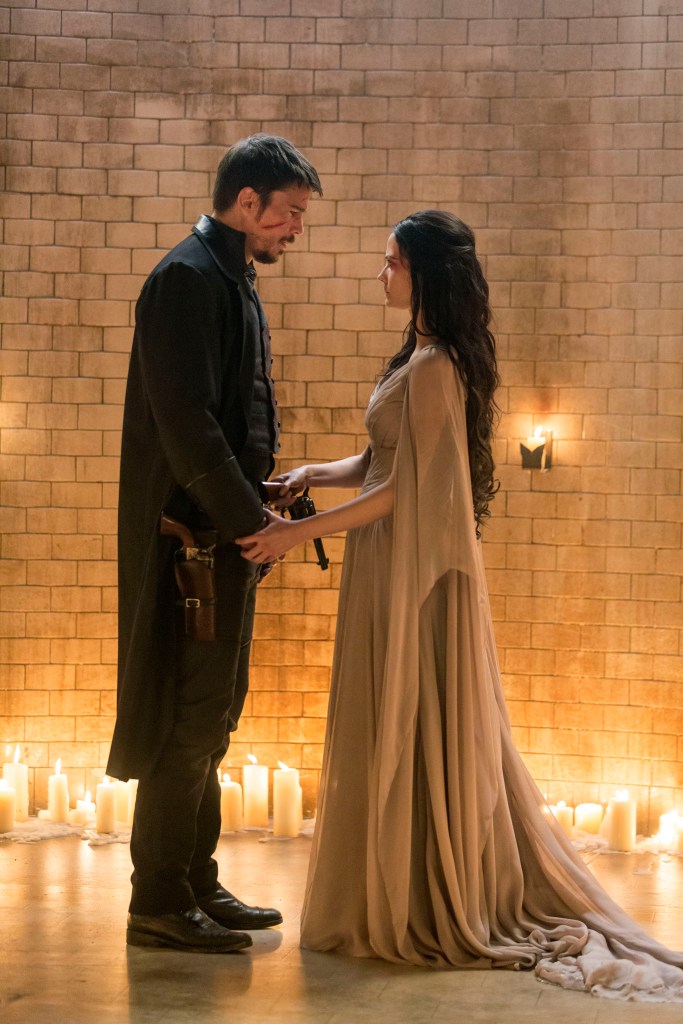 Question: Do you know the name of the song that was sung over the opening credits of Penny Dreadful‘s series (sniff) finale? It was beautiful. —Holly
Ausiello: It was called “A Prayer” and it was written by Tony-winning composer Tom Kitt specifically for that change-of-pace opening title sequence. “I wanted to signal to [viewers] that the episode was going to be a little different,” series creator John Logan explains. “It also foreshadowed [the theme of the] episode, which is ascension to heaven and finding peace with God.” But even more than that, the song was intended as a valentine to the show’s loyal, passionate fans. “I feel a great sense of responsibility to the fans, because I’m a huge genre fan and I’m a huge horror fan,” he notes. “And I think we’ve treated them with affection and respect all the way along.”

Question: Anything on Blindspot? —Monika
Ausiello: In Season 2, we will See. Jane. Shrink. The NBC drama, which wisely just snatched Archie Panjabi off the open market, is looking for an actress age 9 to 11 to play “Young Jane” in a series of flashback sequences to be spread out over the course of the season. Producers are specifically looking for candidates who possess a background in gymnastics or martial arts and can execute a flawless South African accent and look like a miniature Jaimie Alexander. Easy peasy!

Question: I love Preacher (the comic and now TV show), and I remember Elizabeth Perkins and Lucas Neff being cast as members of the Quinncannon family — but I haven’t heard or seen anything with them. Are they still on the show? — Chris
Ausiello: As you have perhaps surmised by now, the AMC series wound up going in a different creative direction with regard to those characters, so no, they are not currently being featured.

Question: Any updates on How to Get Away With Murder? Wondering if they are going to add any new people, or what Frank’s status is. —Cathy
Ausiello: Annalise Keating may soon come under scrutiny for her unorthodox teaching methods: The Shondaland thriller will introduce the “self-assured, friendly and warm” president of a university for a major Season 3 recurring arc.

This AAnd That…
♦ Look for the Legends of Tomorrow crew to cross paths with a circa-1942 Albert Einstein in Season 2, but they’re disillusioned to discover that the legendary scientist is a snarky, brusque skirt-chaser. Needless to say, he proves to be quite a handful when they attempt to save his life.
♦ I’ve never been a big Game of Thrones fan — while I admired the scope and spectacle but felt detached from the characters and emotional stakes — but even I was wowed by Sunday’s sensational, satisfying season finale. I still maintain that Penny Dreadful and Bates Motel are superior series though.
♦ Speaking of Penny Dreadful, anyone else suspect we’re not getting the whole story about the show’s abrupt demise?