If you or I were Grey’s Anatomy‘s Jo, we probably would have admitted to non-fiancé Alex a long time ago that we wouldn’t marry him because we were already hitched to an abusive spouse we feared would hunt us down if we divorced him. The way Karev loves her, he not only would have understood, he’d have been supportive as hell.

But alas, we aren’t the Grey Sloan resident. So, even in the Season 12 finale, she refused to disclose the reason that she wouldn’t accept her boyfriend’s proposal. Or at least she refused to disclose it to him. Instead, she drunkenly told all to surgical intern Andrew — just before Alex came in to find them in what appeared to be (but wasn’t in the slightest) a compromising position. 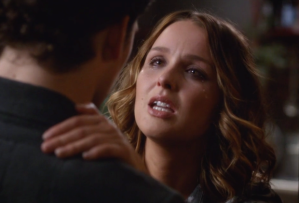 Flying into a rage, Karev slugged DeLuca — repeatedly — and Jo was faced once again with a choice to come clean or risk losing Alex for good by keeping him in the dark. We know what we’d do — and what we think you’d do, too. But what will Jo do when Grey’s returns this fall to resolve the cliffhanger in Season 13? Will she finally trust Karev enough to be honest with him? Or, since she’s already confessed to Andrew, will she turn to him (thus capitalizing on the chemistry they first demonstrated back in October)?

Rewatch the climactic scene below, then vote in the poll and hit the comments with what you hope will happen.