Correct me if I’m wrong, Grey’s Anatomy enthusiasts, but the Season 12 finale had it all — everything from a runaway bride and a budding love (lust?) triangle to the revelation of a devastating secret and a guest appearance by the stork. Heck, it even had some of that “lighter tone” that Shonda Rhimes promised us so long ago. Before you hit the comments with your review, let’s rewind and go over the highlights.

HERE COMES THE RAIN, AMEN | As “Family Affair” began, Meredith was predicting rain (which arrived moments later), reassuring Alex that he hadn’t found and lost his one great love (and it wasn’t Izzie, in any case!) and marveling that Owen was marrying Amelia. “You can’t expect her to be Cristina,” Karev said. Couldn’t she? Meanwhile, the bride was having her heart torn out by her family. “Mommy, please,” she tearfully begged, “I’m getting married!” But alas, not one of the Shepherds would be in attendance. Devastated, Amelia locked herself in the bathroom until Owen arrived and coaxed her back out by promising, hey, “I’ll be there.” Stopping in at Grey Sloan pre-ceremony, Mer bumped into Nathan, who suggested a quickie. “Don’t get any ideas,” she said, a twinkle in her eye. “There are no ideas here.” In response, he playfully reminded her, “You jumped me!” (Where has this charming Nathan been all season?) Eventually, they agreed that they were just friends. Well, “friends who had sex four times in one night,” he noted.

UNHAPPY HOUR(S) | When Alex popped by his and Jo’s place to pick up formalwear, his non-fiancée shocked him by blurting out, “Let’s make a baby!” This would prove to him that she was all in, she thought — wrongly. What he wanted was to know why she wouldn’t marry him. “I’m not some idiot kid anymore,” he railed. “I’m a man, and I’m done with games.” And, therefore, it seemed, done with her, too. Later, at the bar, Stephanie pawned off a drunken Jo on Andrew, who learned from the blotto resident that she couldn’t marry Alex because she was already married! When he got her home to tuck her in, she added that her husband was abusive, and if she dared try to divorce him, he would find her. Turned out, Jo wasn’t even her real name! Just as Andrew accidentally wound up in what looked like a compromising position with a mostly-undressed Jo, who should walk in but Alex. Jumping — understandably — to the wrong conclusion, Karev proceeded to punch (and punch and punch) DeLuca.

IT’S A GIRL! | At the church, April — Owen’s best man — realized that she didn’t have the wedding bands. Since Ben was just arriving, she asked him to give her a lift back to Mer’s to retrieve them. Unfortunately, no sooner had she found the rings than she began to have contractions. Rather than take a chance on giving birth in Ben’s car, she asked him to deliver the baby at the house. At first, April’s biggest concern was that Warren would see her vagina during her pelvic exam. But when he felt a foot down there, the tone changed immediately and dramatically: The baby was breech, so Kepner needed an emergency C-section just like Ben’s ill-fated patient in “There’s a Fine, Fine Line.” Left with no alternative, Ben called Grey Sloan, where Jackson, Arizona and Bailey were gathered around a phone. He was gonna have to do it, he told his wife. “I trust you,” she replied, bringing to an end her doubts about his surgical trustworthiness (and maybe his suspension, too?). Miraculously, both mother and child came through just fine, and at the end of the hour, Jackson introduced April to their daughter.

‘THIS IS YOUR LOVE DAY!’ | Upon arriving at the church, Meredith discussed Cristina with Owen — in particular the fact that he hadn’t so much as told his ex he was remarrying. After Amelia overheard, her mood went spiraling downward. What could Meredith do to help? Grey asked, seeing the state her sister-in-law was in. Amelia couldn’t turn to Maggie, Shepherd said, because anytime she did, Pierce came back “full of sunshine and candy and hope.” So that left Mer, and dammit, she wasn’t on the bride’s side. Grey got it, though. “You’re me before Derek,” she noted. So she could handle this crisis. “Today I am your person,” Mer added. When she told Amelia that they could run away if that was what she wanted to do, off the duo went with Maggie in tow — in the rain, no less. Over a Slurpee, the would-be Mrs. Hunt suggested to her “sisters” that maybe Owen was just her “new drug,” or maybe they were just “filler” to each other having lost their one great loves. 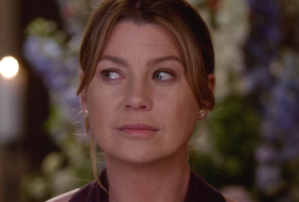 ‘LET’S ALL BE HAPPY’ | While Owen refused to worry about whether his bride would show up — “She’s earned the benefit of the doubt” — Mer suggested to Amelia that lotsa people get two great loves. Like… like… um… Richard, Maggie interjected. And, in short order, the wedding was back on (if it had ever truly been off in the first place). Since April was obviously not going to make it to the nuptials, Nathan delivered the rings to Owen, who invited his former BFF to stick around. Left alone again, Riggs and Mer opened up some more about Megan and Derek and the kinds of weddings they had wanted. (Grey even mentioned her and her late husband’s Post-It vows.) Meanwhile, having noticed that the sad Charlie Brown music played every time Callie passed by, Arizona took pity on her ex, delivering Sofia to her doorstep along with two plane tickets to New York. Robbins wanted her daughter back the next weekend, but in the meantime, she wanted Torres to take her and be with Penny. Arizona seemed to have a whole new custody arrangement in mind, one that would give her “all summer and every other school year,” and give Callie the rest of the time. (Which is indeed a “beautiful payoff,” as Kevin McKidd told us we’d get. But does this mean Sara Ramirez is really leaving? What just happened here?) Finally, as the wedding got underway, Nathan flashed a winning smile that Maggie mistakenly believed was for her, not Mer. “I really like him,” Pierce whispered to her half sis, and “I think he likes me.” Uh-oh.

Are you relieved Japril’s daughter is here? Worried that Callie is gone? Hoping Jo will come clean with Alex? Grade the finale below, then hit the comments!