Thanks to ABC’s terrifying promos for the midseason premiere of Grey’s Anatomy (Feb. 11 at 8/7c), we’re as braced as we can be for Meredith’s violent attack by a patient in “The Sound of Silence.” But what else do we need to know going into not only the Denzel Washington-directed episode but also the season’s second half? Read on…

5. Even after three months of suspense, we still won’t learn what Jackson was going to tell April in the winter finale — whether they were finished or starting over. However, since Michael Ausiello hinted that we would likely find out the Feb. 18 episode — and that installment is titled “All I Want Is You” — Japril fans might wanna put some bubbly on ice for celebrating.

4. Then again, the Feb. 18 title could refer to Alex and Jo, not Jackson and April. When last we saw Karev and Wilson, he’d just popped the question and was waiting for an answer. And, since the midseason premiere is “very Meredith-centric,” per Sarah Drew (April), even if Alex got his answer, it seems unlikely that we’ll be immediately told what it was. (If it’s a no, maybe the tender kiss that he gives a stricken Mer in the promo is a sign that Ausiello is finally going to get the Grey/Karev pairing he’s occasionally championed?) 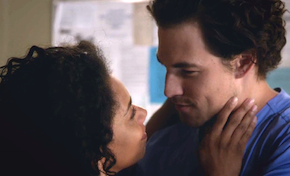 3. Whether Maggie ultimately decides that Andrew is a keeper “remains to be seen,” her portrayer, Kelly McCreary, recently told Matt Mitovich. But in the meantime, the show has made up its mind about McStudly — by promoting Giacomo Gianniotti to series regular.

2. Though Martin Henderson and Kevin McKidd have both confirmed that Nathan himself is not the sister we never knew Owen even had, the mystery of her fate won’t be resolved for another month or so. (McKidd has said that we’d get the deets around Episode 14, and the midseason premiere is only Episode 9.)

1. Someone’s about to spend some quality time on a shrink’s couch. When we originally learned that Life Goes On dad Bill Smitrovich would guest-star in Episode 10 as a “fatherly” therapist, we assumed that he’d be counseling Derek’s widow. Now that we know about the ordeal she’s soon to endure, that scenario seems even likelier. On the other hand, he could also be treating Owen (whose PTSD has flared up since Nathan’s arrival) or Amelia (who’s just fallen off the wagon), or helping the Averys navigate the road to reconciliation.

What are you hoping to see — and see less of — in the second half of Season 12? Hit the comments!