Question: I’m so happy the TV season is resuming. I’m mostly happy about TGIT returning. Got anything for this 12-season Grey‘s Anatomy fan? —Mark
Ausiello: If you’re expecting an immediate resolution to last November’s big ‘Japril’ cliffhanger, you’re going to be sorely disappointed. “We do find out what Jackson was going to say to April,” Sarah Drew confirms to me. “But not in the first episode back [on Feb. 11].” As Drew reminds, the brutal midseason premiere is “very Meredith-centric. And we’re really just absorbing that story.” Pssst: Rumor has it we’ll find out what words were on the tip of Jackson’s tongue in the second episode back, which, curiously, is titled, “All I Want Is You.”

Question: Is there any chance that Owen’s MIA sister on Grey’s Anatomy is none other than Riggs himself? Transgender storylines are all the rage, after all. —Catherine 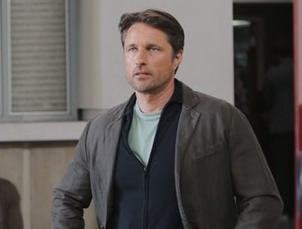 Ausiello: They are. But he’s not. Both Martin Henderson (aka Riggs) and Kevin McKidd ruled out such a twist when I spoke to them last week at the Television Critics Association winter press tour in Pasadena. “While it would be nice to have the opportunity to play such complexity on network TV, I sadly doubt it will be as controversial or topical as that,” Henderson shared. McKidd took things a step further, telling me, “That one’s off the table for sure.” The question regarding the whereabouts of Owen’s mysterious sibling will be resolved around Episode 14, McKidd went on to tease. And don’t assume she’s dead. “It’s more ambiguous than that,” McKidd hinted in our Winter Preview-Palooza. “There’s nothing definite about the fate of his sister.”

Question: Any chance we’ll see Elena back on The Vampire Diaries this season? —Ashley
Ausiello: Not if we’re lucky, Ashley. According to executive producer Julie Plec, the hope is still to bring Nina Dobrev’s character back for the end of the series, so “unless something catastrophic happens” (Plec’s words) and this ends up becoming the final season, don’t expect to see Ms. Gilbert in 2016. “I basically committed to Ian [Somerhalder] and Paul [Wesley] that when they’re ready to be done, I’ll be done,” she adds. “They could be ready very soon, or they could really want to stick it out. Right now, that’s up to them. I’m with them as long as I feel like I can keep telling stories for them.” That said, “there is still a chapter of [Elena’s] story left to be told,” so Plec says she’ll “take [Dobrev] for whatever she’s willing to do to tell that story.”

Question: I’ve been a longtime fan of yours (since the TV Guide days) and I’m dying for Arrow scoop. —Lisa
Ausiello: You skipped right over the Soaps In Depth era? You missed out on some gratuitous, decades-old Santa Barbara coverage. On the Arrow front, when Nyssa returns on Feb. 3, the League member “is going to take on Malcolm in a really ambitious and full-scale way, and she’s going to be asking Oliver to do some pretty dark things,” previews EP Wendy Mericle, who adds that the topic of Nyssa’s onetime lover Sara’s recent resurrection won’t come up in the “gangbusters” episode — partly because “she is off time traveling on Legends [of Tomorrow]!” 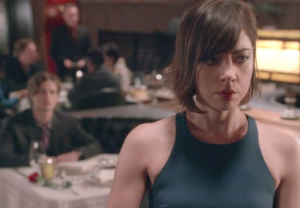 Question: Any Criminal Minds spoilers you can share with us? —Lena
Ausiello: Aubrey Plaza is of the opinion that Cat Adams — the gun-toting, bomb-planting psychopath she played in last week’s change-of-pace episode — has some unfinished business with dinner companion Reid (Matthew Gray Gubler). “For me, it was a love story,” the actress opines. “And I don’t think it’s over. I think you’re going to see Spencer visiting me in jail, Hannibal Lecter style. I can’t speak for the writers or the producers, but I told them that this is not over. These people are soul mates.” In related news, Aubrey Plaza is a delusional, demented delight. I pray she never changes.

Question: Do you think Rachel Bloom’s recent awards victories will save Crazy Ex-Girlfriend from getting canceled? —Lisa
Ausiello: Although The CW’s official renewal decision is still months away, no one is more confident than Bloom herself about the chances of a second go-round. “It’s highly unlikely that we wouldn’t get a Season 2 at this point,” she tells TVLine. “I could eat those words and be disappointed and try to be shopping around this show next season and see who else will take it. But I think [the awards show success] bodes well for Season 2.”

Question: I binged Crazy Ex-Girlfriend last weekend, laughing the whole time. Please tell me anything you can! —Pia
Ausiello: As Rebecca finds herself torn between Josh and Greg, the relationship pendulum will begin to swing toward one of those guys in upcoming episodes. “Josh originally was meant to be a symbol and Greg was the guy she should go for. But as we’ve done the show, Josh and Rebecca complement each other,” series star Bloom teases. “In many ways, they give each other what the other person needs, and that has been a revelation to us on the writing staff. We’ll be playing with that tension.” Bonus scoop: Episode 16 will feature a hip-hop number that Bloom suspects will go viral.

Question: Any scoop on Scandal? —Alexander
Ausiello: Ever hear of a phoiler, Alex? Probably not, since I just invented it. It’s a spoiler that arrives in the form of a photograph. Scroll down and feast your eyes on an exclusive phoiler from Team OPA’s mysterious (and clearly shocking) case-of-the-week in Scandal‘s Feb. 11 midseason premiere. (Heads-up to my competitors: I own the trademark for “phoiler,” so if I see that word pop up in any of your little spoiler columns you’ll be hearing from my heavy-hitter lawyer.) 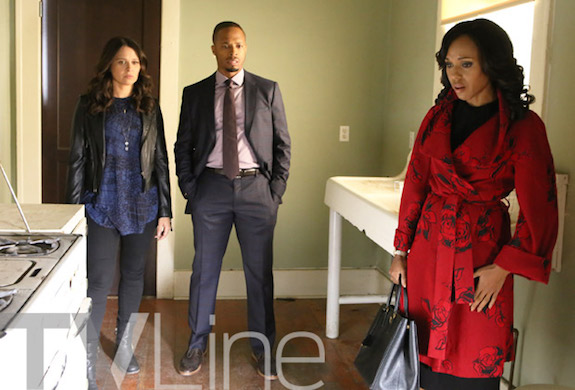 Question: I love Once Upon a Time and I’d love any scoop about Milah’s return. —Audrey
Ausiello: Being the dearly departed ex of both Rumple and Hook, Milah “has a big connection to two of our main characters,”co-creator Eddy Kitsis reminds. As for how she folds into the heroes’ trip to the Underworld, “We don’t want to spoil anything, but… wouldn’t it be weird if she met Emma? She and Emma might be an awkward meeting.” Just as fun is the prospect of long-dead Milah getting the 411 on the fantastically twisted family tree that branched off of her. Hints co-creator Adam Horowitz, “I love the idea of Milah learning just how she is connected to all our characters!”

Question: You’re the Worst is one of the best shows on TV right now, especially due to recent performances by Aya Cash. However, the show has gotten really dark lately. What does the future hold for Jimmy and Gretchen, and will the show return to its sarcastic, funny roots anytime soon? Thanks! —Danielle
Ausiello: Series creator Stephen Falk is contemplating that very question as he writes Season 3. When it comes to handling Gretchen’s depression, Falk admits he has “a duty to portray it in a realistic way. It’s something that doesn’t just go away. We don’t want to get bogged down with it and have it overtake the show… but we’re not going to let it go away.” That said, star Chris Geere is hoping that brighter days are ahead for the show’s central couple. “Season 2 was very ‘Jimmy vs. Gretchen,'” Geere says, “and I’m hoping that Season 3 will be ‘Jimmy and Gretchen vs. the world.'” 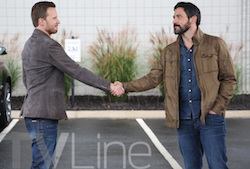 Question: What can you tell me about Riff, the new guy on Nashville? —Trish
Ausiello: Portrayer Steve Kazee tells us that his former-country-star character is old friends with Luke Wheeler, who “pulls me out of retirement.” So does that mean he’s Wheelin’ Dealin’ Records’ newest artist? “I don’t know about that,” Kazee says. “We’ll have to wait and see how that goes.”

Question: Any scoop on the identity of Zoom on The Flash? —Katy
Ausiello: Now that Zoom is in cahoots with Harry and has someone to talk to, more info about the Big Bad will come to light. “We get a little bit more of his personality,” executive producer Andrew Kreisberg previews, “and a little bit more about what he wants and why he wants it. All that is going to come to a, hopefully, very exciting head.”

Any scoop on Empire to tide us over ’til it returns in March? —Lindy
Ausiello: If you’re wistful for those innocent days when Jamal wasn’t kissing girls and Michael wasn’t getting, um, serviced by creepy artists out on the balcony, here’s some good news from EP Ilene Chaiken on the estranged couple: Rafael de la Fuente’s time on the show is not yet finished. “We will see Michael again,” Chaiken says. “So far Michael has been the great love of Jamal’s life. And just because they hurt each other doesn’t mean they’re finished with each other.”

Question: Is the business with the male clones pretty much over with on Orphan Black? —LaShawna
Ausiello: Even though Rudy and several of his brothers died, executive producer Graeme Manson warns, “We’re not finished with our male clones. Mark’s still out there, and Ari Millen’s still in the cast for Season 4, I guarantee.” And with the last surviving Castor clone (that we know of) having earned Sarah’s trust, the question becomes, “If we can find our own cure, can we cure Mark? Is that a possibility for next season? Is Mark the one brother who’s earned the right to call himself a brother?”

Question: Got any scoop about when Bones will be returning? —Yvonne
Ausiello: I’m told sometime in the spring. When Season 11 does resume, Michaela Conlin promises “a lot of angst” for Angela and Hodgins in the wake of the latter’s paralysis. “There are different stages of adapting to a tragedy like this, and right now we’re in the stage of Hodgins giving up a little bit,” the actress previews. “[The writers] are really honoring those depths, which we’re really grateful for.” Conlin is also pleased to see “Angela fighting for” her man because “she always sort of has one foot out the door. But now she’s like, ‘I’m all in with you, I want this to work.'”

This AAnd That…
♦ Mystery solved: The X-Files‘ Feb. 8 outing, “Home Again,” is not a sequel to the show’s seminal, celebrated Season 4 outing 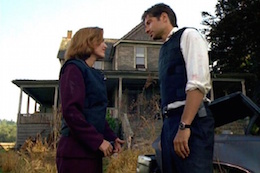 “Home,” series creator Chris Carter confirms. Despite the title similarities and the fact that they were the brainchild of exec producer Glen Morgan, Carter tells me that the two installments are not connected. So, what’s up with the title then? “You’d have to ask Glen Morgan about that,” he instructs me. “I know why he named it ‘Home Again,’ but you’d have to ask him.” Thanks for bupkis, CC!
♦ Turns out Scandal‘s Bellamy Young covets the ABC drama’s fictional Oval Office almost as much as her alter ego Mellie Grant. “I definitely think about how fun it would be to play the President,” the actress shares. “I’d love to get to be the first woman that Shonda Rhimes wrote presidential material for, and take on all the issues through that prism. What an honor that would be.”