Question: Any Good Wife scoop on Cary? —Mohammad
Ausiello: I finally have an answer to the burning “Does he bat for Team Gay?” question. Remember a few months ago when Cary seemed to doth protest too much when his underling hit on him? Well, EP Robert King reveals that the odd, seemingly out of nowhere exchange was neither a seed being planted for a bigger storyline nor a non sequitur. “We liked how Cary was out of step in trying to get in touch with the newest generation coming into the law firm,” King explains. “He wanted to belong and he wanted them to feel like they belonged. And of course it’s misinterpreted by the young associate as a come-on.”

Question: Are we going to see Zach this season on The Good Wife? —Anabel
Ausiello: Yes, ma’am. Graham Phillips will return as Alicia’s golden boy in the first post-holiday episode (airing Jan. 10), an hour that finds the entire Florrick clan crammed into Peter’s campaign bus en route to the Iowa Caucuses. (Get a first look at the family reunion, below; is that Zach’s GF wearing the Georgetown hoodie?) Oh, and you know who else will be on that bus? Alicia’s new archnemesis Eli! Fun times. 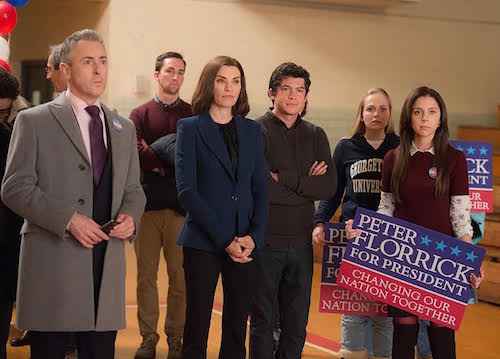 Question: Anything new on the Gilmore Girls revival? —Maureen
Ausiello: What would you say if I told you that one of the main four characters (i.e. Lorelai, Rory, Emily or Luke) will be getting a new love interest? Spit it out, Maureen — what would you say?!?!?

Question: Can you give Nashville fans an update on Hayden Panettiere’s temporary leave?  —Shannon
Ausiello: We asked showrunner Dee Johnson this very question last week, and she said Panettiere’s medical leave (for treatment for postpartum depression( would end “soon,” but added that the actress hasn’t yet returned to set.

Question: Still freaking out after The Originals’ midseason finale. Please tell me you have good news. — Betty
Ausiello: Sorry, Betty, no good news here — especially if you’re a Mikaelson. As if Aurora, Tristan and Lucien weren’t enough, I hear another shadow from the Original family’s past is coming back to haunt them in 2016. Be on the lookout for Cortez, a “callous, smart and manipulative” vampire with “little regard for human life.” Sounds like a hoot, no?

Question: I want to know about Eliza Coupe’s Quantico character. I loved her first episode! —Paola
Ausiello: How about this nugget? There’s a good chance we’ll see former spouses/current partners Hannah and Ryan at work in their professional guises, executive producer Joshua Safran tells TVLine. Whether Alex also will see them working closely together — and how long it’ll take her heart to break all over again — remains up in the air. 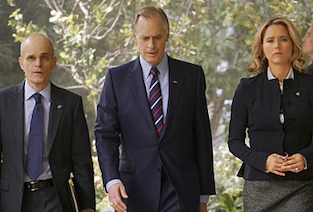 Question: Come on, give: I think Madam Secretary is the best show on TV, and I need the dirt! —Andrew
Ausiello: Did you pick up on the fact that there were a bunch of high-powered dignitaries — Elizabeth and President Dalton, as well as Maria Ostrov — very close to the area where the attack happened at the end of the fall finale? Because I did. “I’m so glad you saw that,” executive producer Barbara Hall tells TVLine, promising that the next episode will pick up right where the finale left off. “We’re not going to make you wait” to find out who lives or (gulp) dies, she continues. And the confusion over who was the attacker’s actual target? “The episode is pretty much dedicated to taking us down that path.”

Question: Did the Blind Item concerning a co-lead possibly dying ever get revealed? Did I miss it? —Billy
Ausiello: It was revealed, William. Nice job staying on top of things.

Question: Anything on Devious Maids? I’m dying for Season 4 over here! — Kate
Ausiello: Well, Kate, how about some fresh intel on two new faces popping up in Beverly Hills next season? First up is Kyle, a sweet, sexy — and, most importantly, filthy rich — newcomer who falls for one of the show’s core maids. But economic disparity isn’t the only obstacle for this potential new couple; the maid in question will also have to endear herself to Kyle’s mom Frances, a strong-willed woman who might be a little too attached to her son. (She calls Kyle her “miracle baby.”)

Question: We’ve seen Tyler in the future on The Vampire Diaries, but nothing from Jeremy yet. Any idea where he’ll end up in three years? – Ashley
Ausiello: I can tell you this much about Jeremy’s present, Ashley: He’s a little busy putting out fires in Chicago with the late, great Uncle Mason. As far as his future is concerned, TVD executive producer Caroline Dries says the writers have “talked about it here and there, but nothing is firm. Sometimes, we say, ‘Wouldn’t it be nice if blah blah blah,’ but none of the stories are driving towards anything yet.” So the producers aren’t quite ready to steal him away from Chicago Fire, even though Dries assures us that “Jeremy comes up all the time” in the writers room.

Question: What’s new for NCIS in 2016? —Marsha
Ausiello: The CBS juggernaut, perhaps inspired by our bullish renewal prediction, is looking to add a pair of fresh, young faces to the team in Season 14. The newbies, one male and one female, would both be series regulars.

Question: Will we see more of Mickey on Shameless in Season 6? —Shazul
Ausiello: Just as Cameron Monaghan hinted to TVLine, the jailbird turns up in the Jan. 10 season opener, but his ex Ian has no desire — at least initially — to visit him in the slammer. 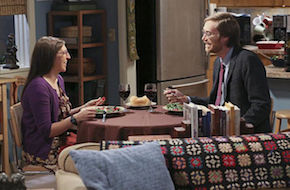 Question: Can I have some Big Bang Theory scoop, please? —Aleksandra
Ausiello: Just because Sheldon and Amy are a couple again doesn’t mean we have seen the last of her ex, played by Stephen Merchant. “He’s a busy guy, but the door is wide open for him to come back,” showrunner Steve Molaro tells me. “We were honored to have him.” (For another TBBT tidbit, scroll down to “This AAnd That.”)

Question: Still obsessed with Empire, and dying to know: Is Jamal’s unexpected night of passion with Skye going to come back to haunt him? —Mona
Ausiello: Depends on what you mean by the word “haunt.” Seeing how Season 1 already found Jamal dealing with a back-in-the-day, opposite-sex romance (and the adorable little girl who ultimately turned out to — ick — be Lucious’), don’t look for Skye to swoop in with a Clearblue Easy box and tickets to Maury Povich. But when we asked showrunner Ilene Chaiken if there’d be any fallout from Lucious telling David Geffen-esque benefactor Jameson (William Fichtner) about Jamal’s hookup with Alicia Keys’ R&B diva, here’s what she had to say. “Without wanting to give away a whole lot of story, Jamal has definitively said ‘I’m gay.’ And I believe Jamal can say that, even if he might have had sex with a woman once or twice,” Chaiken reasons. “Who Jamal has sex with is nobody else’s business. We all know that, yet that’s the fight we fight as gay people. But then there’s Lucious Lyon — and Lucious will stoop low to get what he wants.” Uh-oh, Daddy Dearest had better not screw up that Pepsi endorsement! 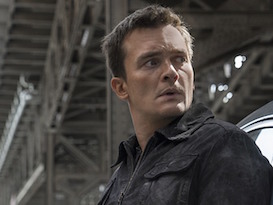 ♦ I’m predicting Sunday’s Homeland finale will mark the end of the road for Rupert Friend’s Quinn. And I think I’m OK with that. The guy has suffered enough (as have we). (Whether that cuts down on Matt Mitovich getting asked by strangers, “Hey, do people ever say that you look like..?” remains to be seen.)
♦ Star Wars: The Force Awakens totally lives up to its 95 percent Rotten Tomatoes rating. The movie is a nostalgic triumph, but the real surprise is how much affection I ended up having for the new characters. Fun tidbit that underscores my VIP status: Neil Patrick Harris, David Burtka and their two beautiful, well-behaved children were sitting behind me at the special screening I attended Wednesday night in NYC.