Can someone make sense of the Once Upon a Time and Castle schedules? Which Scorpion secret shall be revealed? Will the Sleepy sisters enjoy some sibling revelry? Read on for answers to those questions plus teases from other shows.

I hope you can clarify: I thought Once Upon a Time Episode 510 was supposed to be finale before hiatus, and 511 (the 100th episode) was the spring premiere? —Katrina
Clarify, I shall! Or rather, co-creator Adam Horowitz shall. He told me that Episode 10, titled “Broken Heart,” is not the fall finale; rather, Episode 11 (which is titled “Swan Song”) will be the last episode before the winter break. Episode 12 aka the series’ 100th will then open Season 5B in March.

Why is it that Regina ripping Belle’s heart out hasn’t been dealt with on Once Upon a Time? Will it be? –Intarr
I get a lot of emails about this, and though I always assumed that Belle gave Regina carte blanche to do whatever needed to be done in that Season 4 episode, I was wrong. (It happens!) “As far as Belle is concerned, she didn’t know,” series co-creator Adam Horowitz makes clear. “Regina came to talk to her, spelled her, took the heart and controlled her, told her to forget it and undid it.” (Worse, Horowitz quips, “Regina did not leave a driver’s license or a deposit.”) Co-creator Eddy Kitsis reckons that if a day comes “when Belle does find out, she won’t be happy! Belle doesn’t take any s—t.” (Ed. Note: Horowitz has clarified recent comments on this topic, acknowledging that Belle does know but has yet to act on it.)

The Castle EPs have promised a “shift” in the fall finale. Can you confirm which episode is the fall finale that airs on Nov. 23? There is some great confusion regarding the airing order of the eps. –Rida
Clarify, I shall The episodes were filmed somewhat out of order, so they will air as follows:
Oct. 19: “The Nose” (Watch an exclusive sneak peek)
Oct. 26: Rebroadcast of Season 7’s “Once Upon a Time in the West”
Nov. 2: Preempted for Countdown to the CMA Awards special
Nov. 9: Episode 808, “Cool Boys” (aka Adam Baldwin’s return as Slaughter)
Nov. 16: Episode 806, “The Last Seduction”
Nov. 23: Episode 807, “Mr. & Mrs. Castle” (aka the one where “shift” happens)

Do you happen to have any spoilers about the winter episodes of Major Crimes? Especially about the development of Sharon and Andy’s relationship? –Maayan
It appears that a work-related injury will somewhat sideline Andy for a few episodes… and find him convalescing at a certain female colleague’s apartment. Other storylines include a super-twisty murder mystery with a long, disparate list of suspects (airing Nov. 2); the return of Sharon’s ex-husband Jack (on Nov. 9); and a suspicious death during the taping of a reality-TV show.

Is Fargo for real

with that UFO scene? –Deb
Meaning, are UFO’s a recurring theme in upcoming episodes? Yes, there’s a hint of that in every episode I have seen thus far, though to what eventual grander purpose (if any), we can only imagine. But it’s almost moot, since starting this Monday you’ll be transfixed by the launch of Saving Grace/Southland alum Bokeem Woodbine’s arc as Mike Milligan, a plain-spoken yet intimidating enforcer for the Kansas City crime organization. That’s when Season 2 really gets percolating.

What’s going to be learned about Jenny this season on Sleepy Hollow? –Bella
We, too, wanted to know more about how Jenny would be woven into Season 3, so we went straight to the source: Lyndie Greenwood. “The writers this year have found a really organic way of bringing her into the fold,” the actress told TVLine, adding that she’s been in every episode this season “so far.” She teased a special moment for the Mills sisters, in Episode 7, that highlights that “it’s not all tension and sadness and all that anymore. We see some good times with them, as well… They’re a good unit, and I think there are quite a few moments the fans can enjoy.”

I love TVLine and everything you do. But I would love you even more if you had any Scorpion scoop. Anything is welcome, but I was wondering if we will see more of Happy’s dad this season? —Amanda
We will definitely be seeing more of Happy’s dad as the season progresses. What’s more, in an upcoming episode we see Toby’s first boxing match that goes… well, just about as you’d expect it to… while the big secret Happy’s been hiding from the team is finally revealed.

Any scoop on Quantico‘s Liam and Miranda? —Semaj
In a future episode, when the NATs go undercover at a D.C. Hotel, we learn more about Liam and Miranda’s romantic past… and also a complication with their present connection.

Matt, please make my day with some scoop on Blindspot‘s Weller and Jane aka Taylor please. —Naazneen
EP Martin Gero says that an eventual romance ‘tween the two is not off the table. After all, he points out, “They’re arguably the most important person in [each other’s] lives, and that’s a heady, heavy, complicated thing. So, seeing them try to navigate that is a lot of fun. They’re going to make a lot of mistakes, there are going to be some ups and downs, and there will be some really confused emotions. It’s a roller coaster.”

I can cross my fingers for a Ray/Sara hookup on Legends of Tomorrow? I think Caity Lotz and Brandon Routh have a good chemistry already! –Jenny
EP Phil Klemmer all but confirmed a Ray/Sara pairing during the midseason series’ New York Comic Con panel, when he said in addressing a fan Q on that topic, “Any time you’re in in close, life-or-death quarters [about a time-traveling vessel], weird things happens with people.” Bonus scoop: Legends Episode 6 is casting a hulking, brawny a character who is poised to “pick up his father’s mantle and become a powerful villain,” as well as an African-American or biracial male who “decides to put on the uniform of a missing hero who once stood for justice and hope.”

Is there going to be another Toy Story holiday special this year? –Amy
Although ABC isn’t serving up a new made-for-TV adventure for Woody, Buzz et al, a Toy Story 20th Anniversary special – chronicling the film franchise’s road to the Cineplex and subsequent successes — will air in December, paired with a rebroadcast of the original Pixar hit.

When will Mary’s mother return on Reign? –Lori
Amy Brenneman will reprise her role as Marie de Guise in the Nov. 6 episode, titled “The Price.”

People are doing a lot of speculation about the phone call Hawaii Five-0‘s Catherine made at the end of [the Oct. 9 episode]. Are we overthinking that scene or was it made to leave a door open for her return? –Lisa
A door was certainly left slightly ajar, though from what I hear that storyline will not be revisited any time soon.

Hey Matt! I’m really enjoying the new season of Modern Family, but I’m so over Dylan. Any scoopage on Haley and Andy? –Jess
Only that we will be seeing Andy again during November seeps. 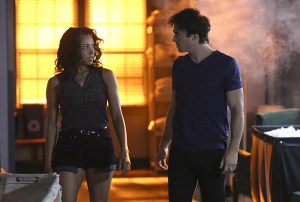 ASK THEM TO GIVE US IF THEY WANT TO PEOPLE CONTINUE WATCH TVD. — Kyddlidd
I’m getting the impression that you’re a fan of Bonnie and Damon’s budding friendship on The Vampire Diaries, so I’ll throw you a little scoop: “They do a shot together in Episode 5,” Kat Graham tells us. So if they can’t be bed buddies, at least they can be drinking buddies!…? “They’re around each other so much this season that I think Bonnie is starting to get a lot of those Damon Salvatore qualities,” Graham adds, “especially his super-confrontational attitude.”

What can you tell us about the next season of Shameless? –Corrado
When I was talking to Cameron Monaghan about his Gotham send-off, I was sure to ask if we have not seen the last of Noel Fisher, who plays Mickey to his Ian on the Showtime series. Monaghan chuckled and then teased, “I don’t think you’ll wait long to see a really nice scene that he has. I won’t say what it is, but it’s a really nice scene.”

Do you have any intel on new Supergirl casting? –Surf El-Danvers
As hinted at New York Comic-Con, the CBS series is casting Winslow Schott Sr. aka the deranged and violent Toyman. Freshly escaped from prison, Toyman seeks revenge on the man who cost him his job – after seeking some much-needed quality time up with son Winn aka Kara’s CatCo colleague. Toyman debuts in Episode 10, which is also casting Saffron Belle, the FBI agent hot on Toyman’s trail.

Real questions, real answers. If you need the Inside Line on a favorite show, email InsideLine@tvline.com!  (With reporting by Vlada Gelman, Kim Roots, Rebecca Iannucci and Andy Swift)