The following post contains major spoilers about Thursday’s Sleepy Hollow. Read on at your own risk…

If you’re keeping score at home, that’s Pandora: one, the Witnesses… minus one.

Fox’s Sleepy Hollow left viewers on a major cliffhanger Thursday when it ended its fall finale with what looked suspiciously like the death of Nicole Beharie’s Abbie Mills.

(If you guessed that the leftenant was the subject of Michael Ausiello’s recent blind item, here’s some cold comfort: You were right.)

In the very last moments of the episode, Abbie, Ichabod and Joe stormed Pandora’s lair to rescue Jenny, who’d nearly been consumed by the power of the mystical gem she absorbed a few episodes ago. But their mission was thwarted by Pandora and her resurrected lover, a god (!) known as The Hidden One.

Abbie was successful in sucking all the energy out of Jenny’s body… but the volatility of the power threatened to blow the entire town off the map. Realizing what she had to do to save everyone, Abbie told Ichabod and her sister to “Take care of each other,” then carried the glowing orb of potential kaboom into an opening in the trunk of Pandora’s evil tree… just before the glowing orb exploded.

When Ichabod came to, he realized that Jenny had survived her ordeal, but Abbie might not have — she was nowhere to be found. The episode closed on him, emotionally gutted, nearly collapsing from the shock of what had happened.

Is Abbie really gone?! That’s precisely the first question we posed to showrunner Clifton Campbell when we talked with him about the finale.

TVLINE | Is Abbie dead?
She makes the decision to save her sister and save Crane and what Team Witness was all about. We don’t quite know where she goes. It’s very disturbing to see her disappear in that way. The astute viewer will notice that there have been things about the tree, the lair and the story we’ve been telling in the first half [of the season] that will suggest what fate Abbie may have met… It’s going to be very daunting and very illuminating when we all realize what happened to her.

TVLINE | Will we see Abbie again this season?
Don’t you want to watch and find out? [Laughs]

TVLINE | What’s Crane’s immediate reaction to what’s happened?
At the end of the episode, it’s utter and complete devastation. The most important person in the world, the woman and person he loves most in his life, has been ripped from him and has done so of her own volition… He’s utterly and completely devastated.

TVLINE | He has a conversation with Joe earlier in the episode about not doing stupid things to save the people you love. Will Crane take his own advice when it comes to saving Abbie?
We’ve all fallen in love, and we’ve all been in love, and we all know that we do some stupid things sometimes for that very important person, that very important touchstone to be a part of your life. This one’s going to challenge him in a way we’ve never seen before.

TVLINE | The ‘shippers are going to enjoy what you just said. To be clear, Ichabod views Abbie as someone he is in love with?
I don’t think there’s ever been a question that he’s in love with her. Those are complicated emotions… Crane is trying to find his place in the modern world, and [she’s] someone he had no choice but to immediately partner up with. In essence, it’s a supernatural work relationship. It’s hard to separate those two things out. But I don’t think that anybody who looks at the two of them, particularly when they are looking at each other, can’t see the unquestionable depths of their love for each other.

TVLINE | In a flashback, Paul Revere tells Ichabod not to let anyone get too close, because it hurts too much when they’re gone. Along those lines, does the loss of Abbie harden Ichabod at all?
He’s not a man who is liberal with extraneous emotions, but this one will find him in a place where we will see a mad desperation turning him to make interesting choices.

TVLINE | Abbie and Jenny’s dad, Ezra, is going to show up in the second half of the season. What can you tell me about his arrival?
We want to find the emotional equilibrium of all the characters. And once we’re all in the same place emotionally with these characters, it’s utterly and completely critical that the characters reach out to each other for support. Jenny in particular, in her loss, has to reach out to her father, and she does. I can give you this little bit of a spoiler: We’ve got James McDaniels playing Ezra — he’s terrific — and while we have announced that he’s around for one [episode], I feel pretty confident to let you guys know he’ll probably be around for a little more than that.

TVLINE | Jenny and Joe kissed right before everything fell apart. Will you pick up with that when the show comes back, or is Jenny not in a place where she’s able to move forward with him?
We definitely pick up where that left off. While she thinks she’s not ready for it, what’s happened at the midseason break is something that even through that denial, she finds herself needing even more. And Joe is absolutely the guy to step up and be there for her.

TVLINE | Does she have any side effects left over from being the Hidden One’s Eye?
There are no lingering effects. 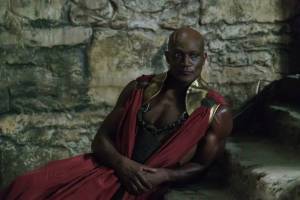 TVLINE | Is The Hidden One around for the rest of the season?
Yes. Our übercouple, Pandora and The Hidden One, will take us through the back half.

TVLINE | They seem to want to restore the world to what it was like when they were in power. What will that look like as we move through the rest of the episode?
First we’ll find out a ittle bit more about their origin story. It, too, is also a love for the ages. It isn’t quite the love that we mortals think of, but it also comes with the same checklist of things that you expect from that type of a relationship and that sort of intimacy. It’s just super jacked-up and supernatural.

TVLINE | Pandora says something about them having used Witnesses in the past — will we learn more about what that might mean for the current Witnesses?
Yes…. We’ll get a lot more of an idea about the role Witnesses have played for thousands of years.

What did you think of the episode, Sleepyheads? Grade the fall finale via the poll below, then go to the comments with your theories on Abbie’s fate.