THE PERFORMANCE | After The Leftovers had Kevin’s one-night stand “depart” mid-tryst and gave him Patti as the world’s worst imaginary friend, we would have wagered that we had seen Theroux do it all. And, if you’ll recall, do it well. But we would have lost that bet in a big way.

As the drama out-Twin Peaks’d Twin Peaks at its weirdest with this week’s “International Assassin,” the actor — criminally overlooked thus far by the Emmys — miraculously grounded the episode in reality by playing not only his deceased character’s incredulity at the bizarreness of his purgatory but also by keeping a laser focus on the sanity-or-madness, life-or-death stakes of his situation.

So we weren’t just horrified for Kevin when he realized that, in order to be rid of Patti, he’d have to throw her innocent younger self in a well, we were horrified right along with him. (Pretty sure the reason we’re still having trouble swallowing is the stubborn lump we got in our throats when he explained to the little girl that it was hard to kill her because he felt sorry for her.)

By the end of the hour, when Kevin had comforted and then drowned the adult Patti (Ann Dowd, stunning as always), we didn’t just want to give his portrayer Performer of the Week, we wanted to give him a hug. And an Emmy. First, though, that hug. 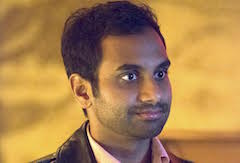 HONORABLE MENTION | The brilliance of Master of None‘s fourth installment, “Indians on TV,” goes well beyond the writing. Though it’d be a crime to ignore Aziz Ansari‘s script, it’s Ansari the actor who really made this episode work. As a writer, he explored bigotry in an industry that can’t stop making the same mistakes. But as an actor, he expertly conveyed just how such bigotry washes over a non-white entertainer. He addresses a loud topic without ever giving a loud performance. Through the character of Dev, he spends an entire episode conflicted by a moral crisis with no fix in sight, and though he perfectly exudes the perplexity someone in Dev’s position would face, he is also able to illustrate the burden of knowing that change can only come when those in power are ready to accept it. 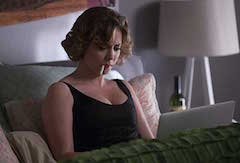 HONORABLE MENTION | When we first recognized Rachel Bloom in October for her work on Crazy Ex-Girlfriend, it was largely due to the zany, bubbly likability that she brought to protagonist Rebecca Bunch. Just a few weeks later, we feel compelled to recognize The CW comedy’s leading lady once more, this time for showing us a much darker, more complex side of her character. After getting blown off by Josh (who just moved in with his girlfriend), Rebecca went down a rabbit hole of drug use as she tried to cope with her resurfacing depression. In the span of one episode, Bloom expertly navigated Rebecca’s ups and downs, shifting gears from hyperactive to stoned to downright desperate. It was Rebecca’s most complicated hour thus far — and easily Bloom’s finest.