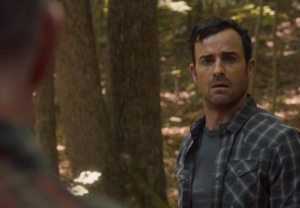 THE EPISODE | “The Prodigal Son Returns“

Theroux’s work in the first season finale was so moving that it would take a dozen columns to do it justice. Heck, we could write an essay just about the way he played the beleaguered police chief’s Bible reading at Patti’s grave. So let’s focus, why don’t we, on one key scene?

En route back to Mapleton after laying to rest the horrors of Cairo, Kevin was challenged by Matt to tell him what Patti thought the chief understood. “Why we didn’t go” in the Sudden Departure, he finally admitted.

Then, with regret etched across his furrowed brow, Kevin explained that, on that fateful October 14th, he had wanted so badly to be free of his family that he had cheated on Laurie. But, after his one-afternoon stand vanished, he had gone to Jill’s school to find her and Tom.

“They were so happy” to see him, he recalled, the shame in Theroux’s voice almost unbearable to hear. At that point, all Kevin wanted was to be with his loved ones. Instead, he began losing them, and he believed — no matter what Matt said — it was all his fault.

By the time Kevin finally excused himself to dry his eyes, we were in tears, too. In part, because his story was so very sad. But also in part because we had just witnessed a performance that felt less like a performance than a confession.

HONORABLE MENTION | Let’s get this out of the way to start: You’re the Worst‘s Lindsay is a terrible human being. Unredeemable. Shallow. Bitchy. But she’s also our absolute favorite, and that’s all thanks to Kether Donohue’s on-point portrayal of the young Mrs. Jillian. As this week’s episode jumped around in time, we watched Lindsay party hard, gloat about getting married before her older sister and then seriously consider leaving her poindexter of a husband. In each scene, Donohue’s cartoon voice and pedal-to-the-floor delivery made her bad behavior a joy to behold — particularly when, coked-up and loving life, she tried to snort the white powder off her own chest. Gretchen, Jimmy and the gang may be the Worst, but Donohue is one of the best.