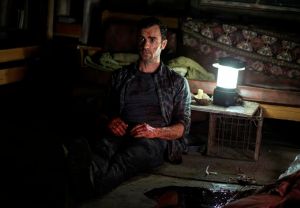 After a torturous week of suspense, The Leftovers concludes its freshman season with a gloriously horrifying finale in which Matt digs Kevin out of a hole (and Patti into one), Jill makes not one but two ginormous life decisions (one for the better, one for the worse), Tom and Christine’s road trip takes a major detour, and the Guilty Remnant brings to fruition its cruel plan for Memorial Day. Care for some details? Read on.

RELATED The Leftovers Renewed for Season 2

BURIAL PLOTTING | The hour opens with the saddest cigarette ad ever – Kevin puffing away over Patti’s dead body, and Jill and Laurie sharing a smoke at GR HQ (to the tune of “Ne Me Quitte Pas” – clever). Shortly thereafter, Matt answers Kevin’s SOS call and arrives at the cabin in Cairo with shovels and a Bible passage for the chief to read at Patti’s grave. (Job, I believe.) Later, when Kevin wakes from a nap on the car ride back to Mapleton, he’s shocked to find that Matt has had him committed to the same mental hospital that his father calls home. “Hey, baby boy,” says Dad before suggesting that he, Kevin and all of the other leftovers were left behind on the day of the Sudden Departure because they are bad people. But wait, it gets weirder – when Kevin turns around, Patti’s there, and she seems to be alive! (So much so that she sits on his lap and kisses him!) Then, at last, he wakes from his nightmare – whew! – and, over a rest stop burger, tearfully confesses his sins to Matt. Afterward, he’s drying his eyes in the bathroom when he discovers Holy Wayne in a stall with his insides falling out. (What a day – sheesh!) Before dying, the cult leader asks Kevin to do him a favor and make a wish – if he’s not the fraud that he fears he is, he can make it come true. (Though Kevin doesn’t say it out loud, it’s safe to assume that he wishes he could have his family back intact.) “Granted,” says Wayne, who then croaks just as the authorities burst in. (Curiously, they ask Kevin if Wayne talked about Russia or made physical contact… ) Finally, Kevin and Matt get back on the road to Mapleton. Of course, more horrors await there…

UP IN SMOKE | While all of this is going on, at GR HQ, Laurie is trying to convince Jill to leave, just for the night, because – given their plans for Memorial Day – it isn’t safe. Instead, the teen defiantly dons all white. “At least you’ll be together,” Meg scribbles to Laurie. And so Jill is at the GR when all hell breaks loose. The GR’s scheme, we learn, is to place the dummies they had made to resemble the departed in the homes from which they departed, thus forcing their grieving loved ones to remember their vanishing. (The point of this? Beats me. But they sure are committed to it.) When Nora sees her family once again sitting at the kitchen table from which they evaporated, she reacts exactly as you’d expect – with soul-crushing anguish. And all across town, this same devastating scene plays out over and over again. So, by the time Kevin and Matt arrive, it’s bedlam. The outraged townspeople are beating the crap out of any of the GR they can grab, GR HQ is in flames, and the fire department isn’t too interested in responding to this particular 911 call. (Can you blame them?) After Kevin saves Laurie from an ass-kicking, she breaks her vow of silence to scream, “Jill!” to let her ex know that their daughter is in the burning house. Thankfully, he manages to save Jill from the inferno, and the two of them walk home hand in hand. (Aww.) They’re even joined by the suddenly tame dog that Kevin tried to rehabilitate. (Double aww.) There’s still a big surprise in store for them, however…

NEW BEGINNINGS | The morning after Memorial Day, Nora is still sitting at the table with her “family.” So, when she starts writing Kevin a goodbye letter, it sounds an awful lot like a suicide note. (Nooo!) Turns out, she’s just leaving Mapleton. (Um, also nooo!) “I’m beyond repair,” she says. But, when she goes to leave the missive at Casa Garvey, she finds something on his porch: Christine and Wayne’s baby! It seems that, after Christine ditched Tom and her newborn at a rest stop, he ditched the infant at his stepfather’s and went looking for his mother. (If he’s the prodigal son of the title – “The Prodigal Son Returns” – he sure as hell picked the wrong parent to return to!) So, when Kevin, Jill and their dog make their way to their doorstep, they are greeted by a beaming Nora, the baby in her arms. “Look what I found,” she says. It’s not only a kid but a reason to stick around, hurrah!

OK, your turn. What did you think of the season finale? Are you satisfied with the explanation that the leftovers were left because they are “bad”? Hit the comments!