The final two episodes of Power‘s second season are titled “Time’s Up” and “Ghost Is Dead” — and if you need any more indication that James “Ghost” St. Patrick’s life is about to explode, allow co-creator Courtney Kemp Agboh to educate you.

But that goodness is likely to get lost in the convergence of two huge developments: Ghost’s drug-empire deputy is in federal custody, and Ghost’s girlfriend is the Assistant U.S. Attorney who put him there.

Oh, and Ghost’s driver is planning to kill him, for various reasons.

But could that get him killed? After all, at the start of the season, Kemp Agboh forecasted the death of “someone that we have been invested in” — and she now tells TVLine that the unfortunate soul will meet his or her fate this week or next.

In advance of the season’s final two episodes — the first of which kicks on Saturday at 9/8c on Starz — we caught up the EP for all the scoop. Here are some highlights:

PLAYING FAVORITES | “We’ve seen [Ghost] say, ‘I can have my cake and eat it, too,'” the EP notes. “In Episode 9, he actually has to prioritize. He has to pick one person over another.” That decision-making process sets the tone for the finale: “He does some really bad things in the service of the good.” 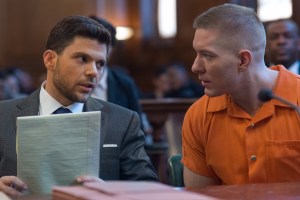 TOMMY IN TROUBLE | The predicament in which Ghost’s right-hand man finds himself is a rough one — sell out his boss/best friend to save himself? — but Kemp Agboh highlights another awful angle you might not have considered. “If you’re Tommy — and I’ll just give you a little bit of a spoiler here — you were on time for the meeting. You got arrested. Where was Ghost?,” she says. “It’s hard to ignore that you’re the one in cuffs, and so is Lobos. Javier is dead. Lobos’ other guys are in custody. What happened there?”

A FIRST TIME FOR EVERYTHING | Here’s a real shocker: Kemp Agboh says Kanan was speaking the truth last episode when he told Shawn that Ghost was the person who orchestrated his decade-long lock-up. And when you add in that the young driver is in love with Ghost’s wife, Tasha… “Think about it,” says the EP. “If you’re that emotionally invested in someone and someone’s hurting them? And then you find out, on top of that, that the reason your relationship with your dad is f—ked up is that that guy sent him to jail? It’s justification for everything you’re feeling.” (In other words, Ghost may wanna download the Uber app ASAP.)

BUSTING GHOST GOT ME LIKE | Angela only recently — as in, when she realized that Ghost changed his number — got her head together about her lover’s illegal activities. “Up until Episode 8, she was really hoping against hope that Jamie was innocent,” Kemp Agboh says. After that, Angela is praying that he’ll get arrested and that she can play off the relationship — at least, to her bosses — as a tactic to bring him down. “But then the next piece of it is: Does she hate him?” the showrunner says. “Because you can’t turn love off as quickly as you think you can.” Also, just in case you were wondering, Ms. Valdes’ wrong-for-the-right-reasons motivation is still in full swing. “The cloning of his phone is illegal. All the stuff that she’s doing is totally illegal,” Kemp Agboh adds. “There’s a part of her that’s not all good, either. It’s why I like the character, because she does such messed-up stuff!”

WAIT FOR IT | Make sure to put off refilling your popcorn bowl until you’re sure you’ve seen everything Power‘s Aug. 15 season-ender has to offer. “People should watch all the way through the end of the finale,” Kemp Agboh says cryptically.