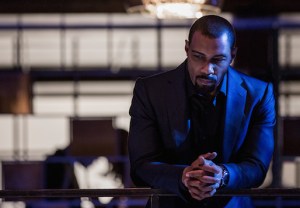 With great power comes great responsibility. And with Starz’s Power comes the certainty that a major character won’t make it out of Season 2 alive.

The drama — which returns Saturday (9/8c) and follows drug boss/aspiring nightclub mogul James “Ghost” St. Patrick (played by Omari Hardwick) — will lose “someone that we have been invested in” this season, creator Courtney Kemp Agboh tells TVLine.

“A character is killed by someone who you never see come in,” she elaborates.

It’s an enticing tease but not a shocking one, given that Power‘s first season introduced viewers to Ghost’s bloody, complicated world. In Season 2, Kemp Agboh and members of the cast say, life only gets more complicated as the parallel realms — and players — of Ghost’s drug empire and James’ legit business threaten to overlap.

The area that’s most rife for that kind of messy crossover? James’ affair with his high school love Angela (played by Lela Loren), who happens to be the federal prosecutor closing in on Ghost’s operation. She doesn’t know that the man she’s in love with is the ruthless kingpin she’s been tracking, but he is poised to find out all about her investigation — thanks to his crude consigliere Tommy being in the wrong place at the right time in the Season 1 finale.

When Tommy will share that key information with his boss/business partner is one of the key questions going into Season 2, portrayer Joseph Sikora says.

“At the end of Season 1, what we’re left at is Tommy knowing Angela works for the government and wondering, because of Ghost’s previous lies, how much does Ghost really know about this situation?” Sikora tells TVLine, calling his character “crushed and hurt” by the notion that his longtime friend might be keeping him in the dark.

“Ghost got some ‘splaining to do,” he says, laughing.

But Tommy may have to wait for the explanation he so dearly wants, Hardwick says, because Ghost is preoccupied with the fact that Kanan — the felon (played by musician/executive producer Curtis “50 Cent” Jackson) from whom he and Tommy inherited the drug business and who has secretly been putting out hits on Ghost’s crew — has just been released from prison. 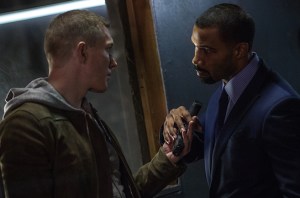 “So there’s a slow-motion play that you see with Ghost, with Tommy all season, because I don’t really know how much I can trust him — but equally, defending his character, how much can he trust me?” Hardwick muses. “These two brothers are at that place that we’ve seen in Greek tragedy and Shakespearean stories.”

Complicating matters is the fact that, with his nightclub shut down after a season-closing shooting, Ghost decides to double down on his drug activities to recoup his losses. And that choice brings its own headaches, Kemp Agboh says.

“He thinks he’s going to have a certain kind of personnel available to him,” she previews. “And then things shift, and he has to go back to basics.”

That’s bad news for Ghost, good news for his wife Tasha, according to Naturi Naughton, who plays the beleaguered Mrs. St. Patrick.

“She’s very into it,” Naughton says. “That’s the part of the season where you’ll see Ghost and Tasha bond again, because the drug game is where she’s needed.”

More time with Tasha might mean less with Angela — not that that is likely to open the fed’s eyes to what’s really going on with her lover. 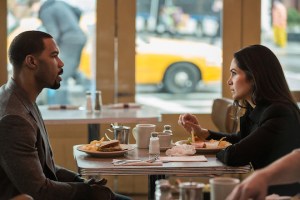 “It’s a mask that she’s fallen in love with,” Loren says. “It is a true side to him, but it’s not the whole picture… Sometimes in relationships, you fall in love with someone and they hook you, and then you find something absolutely abhorrent about them — and sometimes it’s not enough to flick the love switch off.”

Plus, she adds, Angela’s got far bigger, much more immediate problems to deal with, thanks to some not-so-by-the-books moves in Season 1.

“Can you imagine doing shady stuff, and getting your [informant] killed?” Loren says. “There’s going to be massive consequences for that.”

Finally, the similarities to another recent drama about a man struggling to maintain control of his domain… featuring a predominantly African-American cast… with a killer soundtrack? Yeah, everyone involved in Power has heard ’em.

“When they make comparisons to [Fox’s] Empire? There really is not a comparison to make,” Jackson says, smiling. “I’m happy that Empire is a successful show, because it actually creates confirmation that you can tell different stories.” 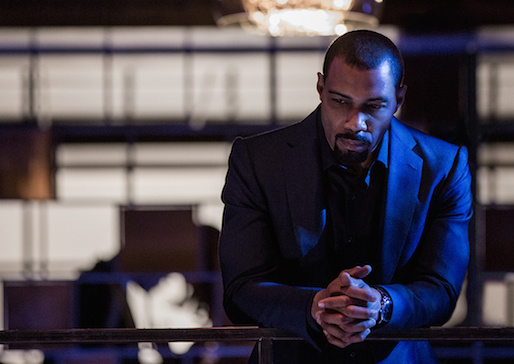