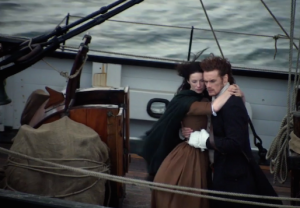 The credits may have rolled on Outlander‘s brutal Season 1 finale, but the aftershock of the violence against Jamie Fraser “definitely carries forward,” series creator and executive producer Ronald D. Moore says.

If you missed the episode, Moore is referring to Jamie’s repeated rape and emotional torture at the hands of Black Jack Randall, who was later taken out of the picture by Murtagh’s brilliant plan and a herd of cattle. (Full recap here.)

Though Claire sets Jamie’s broken bones and tries to soothe his troubled mind, “The reverberations of this will echo throughout the second season in the relationship, his development as a character and how he deals with certain story points,” Moore adds. “Absolutely.”

When TVLine talked to the Outlander boss about the merciless episode, we also asked for some spoilers to tide you over during the droughtlander that lies between now and Season 2. Naturally, we kick off the discussion with a question about nudity. (Oh, you know you want to know…)

TVLINE | Outlander has gotten a lot of press for being one of the few series willing to show full frontal male nudity. What was behind the choice to do it in this episode?
That was mostly just decisions you make [during editing]. I remember not really caring one way or the other what I saw… It was OK in certain moments, and then if I saw their penis in this other shot, it might distract me. It might be like, “Oh, look, they’re showing it!” [Laughs] And that’s just not the right idea.

I think we only left one cut in there that’s full frontal of just Tobias [Menzies]. It’s the one where he gets up and walks away. It’s not really about anything else happening in that moment. It’s a quiet moment. He’s literally just getting out of bed, and he’s walking across the room. It wasn’t taking you out of the scene, if that makes sense. There were other points where you just decide, “No, if I use that angle, I’m not even listening any more.” You’re just kind of going, “Wow, look.” That was the wrong note to sound in those scenes.

TVLINE | When Claire confronts Jamie at the abbey, you’ve portrayed it as less of a fever dream than it is in the book. What went into the decision to play it straighter and to have Jamie more mentally present in the moment?
It was just more about translating and adapting the material. On the page, it becomes more surrealistic… It’s a wonderful passage of the book. I know we’re going to get some criticisms from fans who will miss it, because it was such a great, really well written section, but making it literal changes it.

When you suddenly start getting into literally making surreal television, what are the shots, and are we in a [computer-generated] world, and are they floating? You just start getting into all these discussions that I felt instinctively were going to take you out of the story instead of keeping you in the story. Very early on, we said, okay, we’re just going to play it more grounded. We’re going to play it more real, and just let the actors carry it through.

TVLINE | Claire and Jamie are off to France for Season 2. Talk to me about how the show will look next season.
They’re going to Paris, and they’re going to be dealing with the French aristocracy. So you’re already in a completely different planet than where we were with Season 1. Scotland is about heavy stone, rough wood, dark tabletops, smoke and candlelit rooms, and now you’re in world of gilt, fine China, glassware and costumes that are made of silks and bright colors.

It’s going to be a whole different tone, a whole different…playing the story as much more political. We’re dealing with the Jacobite Rebellion. It’s much more about deception, and lies within lies, and the gossips and the surroundings of Paris. And dinner parties, and going to the court of Louis the XV — and if you know those books, there’s St. Germain, and there’s Master Raymond, and there’s more of an occult feeling to a lot of that stuff. [Plus], she’s pregnant, and he’s got the aftermath of Jack Randall.

In probably every which way you can think of, it’s going to be different than Season 1 was, which I think is one of the strengths of the series overall: its continuing evolution.

TVLINE | What can you tell me about how Jamie and Claire will navigate that world?
In a lot of ways, [Parisian society] is more familiar to him in certain ways than you would anticipate, because he is a laird in his own life, and he has lived in France, and he speaks the French language. It is a somewhat familiar culture to him. He does know his cousin, Jared, who runs a wine business, and he’s been to this place. Claire also speaks French, and she’s adapting in a different way, but she still struggles with the roles woman in these times, even in French society.

VIDEO Exclusive Power Season 2 Trailer: Ghost Tries to Keep His Affairs in Order — But Can He?

TVLINE | Do Caitriona Balfe and Sam Heughan speak French?
Caitriona definitely does, because she spent quite a bit of time in Paris, and Sam is learning French. I just heard him at the table read the other day, and I was pretty surprised. He did quite well.

TVLINE | Can you speak to whether Season 2 won’t be quite as true to the structure of the novel Dragonfly in Amber as Season 1 was to its source material?
It’s just a complicated process of adaptation… The Paris section [of Dragonfly in Amber], the plot is not as clean and simple as the plot was in Book 1. Book 1, for a big chunk of it, is Claire going back in time and trying to get home, and then she’s trying to find Jamie, and those are very clean narratives.

The Paris section of Book 2 is just more complex. It’s about many more ideas, other characters coming and going. They’re involved in something that’s more complex Diana [Gabaldon] shifted points of view, herself, in Book 2. So that alone just makes it a more complicated task to make the adaptation. So, yeah, we’re still struggling with the same things, with trying to be as true to the book as we possibly can while making it a television series. We always just try to do our best.