Mark this down in your gournal: Wet Hot American Summer: First Day of Camp is available today, bringing the counselors of Camp Firewood back for more of the antics started in the 2001 film.

Is the premiere of the eight-episode Netflix series as satisfying as gooey s’mores roasted over an outdoor fire? Or is it as limp as a sweaty athletic sock left to molder under a bunk? In a moment, we’ll tell you our thoughts — and ask for yours. But first, a quick recap:

The action takes place on June 24, 1981, the titular opening to Camp Firewood’s summer season. (For those unfamiliar with the premise, the movie unfolds over the same summer’s closing day.)

In the first half-hour installment, we watch as camp administrators Beth (Janeane Garofalo, Girlfriends’ Guide to Divorce) and Mitch (H. Jon Benjamin, Bob’s Burgers) address the newbie counselors — including Michael Showalter’s Coop, Paul Rudd’s Andy, Amy Poehler’s Susie, Bradley Cooper’s Ben and Ken Marino’s Victor — about what is and isn’t acceptable behavior. (Bottom line: No sex.) This is hilarious to the group of hornballs, nearly as funny as the series’ repeated visual gag that the actors (most in their 30s and 40s) are playing 16- and 17-year-olds. 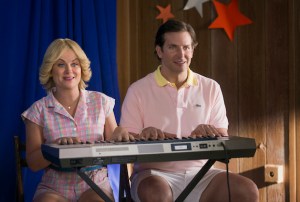 The series retains the movie’s sense of silliness as it mocks Afterschool Special-esque topics like bullying and losing one’s virginity. The campers — played by a new batch of younguns — are for the most part secondary, save Kevin (Partners), the awkward camp newbie Coop takes under his wing. And there’s a wink-wink joy in seeing plots that met their conclusion in the movie (Ben’s sexuality, the whole Andy-and-Katie thing) start in a whole other place.

That doesn’t mean, by the way, that you need to have seen Wet Hot American Summer in order to enjoy First Day of Camp… though if you don’t go for the series’ fast-and-loose bawdiness in the first episode, you probably won’t enjoy subsequent installments. Also good to know: Some of Wet Hot‘s famous faces, like vets Christopher Meloni (Law & Order: SVU) and Elizabeth Banks (30 Rock) and newbies like Jordan Peele (Key & Peele) and Jon Hamm (Mad Men), don’t show up in the premiere.

In the end, Wet Hot‘s biggest joy comes from watching the a-list actors — most of whom garnered their fame long after the movie was made — cavort like it’s 2001 all over again.

Now we want to know what you think. Grade the Wet Hot American Summer: First Day of Camp premiere via the poll below, then hit the comments to elaborate on your choice.