If you plan to visit Camp Firewood for Netflix’s Wet Hot American Summer prequel series — which hits the streaming service at midnight on Friday — make sure to leave some room in your duffel bag for suspension of disbelief.

Executive producers David Wain and Michael Showalter, who also wrote the eight-episode limited series, are well aware that the camp’s counselors don’t look exactly as they did in 2001, when the feature film was released.

“When we made the original movie, we were 30 playing 16. Now, we’re in our forties playing 16. There’s only so much you can do to de-age that,” Showalter tells TVLine. “We weren’t worrying too much about trying to convince the audience that I, for example, am really actually 16. It’s more like, ‘Come with us on this crazy, silly thing, and let yourself just pretend for a half-hour episode that we’re all in our teens.’

Below, Showalter and Wain describe how the Wet Hot series came to be, how the comedy has changed after 14 years and the potential for Season 2.

CALLING ALL CAMPERS | Although Showalter maintains that First Day of Camp “couldn’t have happened” anywhere other than Netflix, the streaming service was the last part of the equation when it came to planning a reboot. The first priority? Getting each original cast member on board, which was easier than you might suspect. 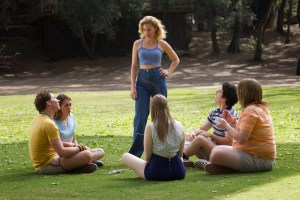 What’s more, the production schedule did not pose any major conflicts that would cause the cast to film scenes without each other. “It’s much the same look, feel and tone of the film,” Wain adds. “We’re glad to say that we didn’t have to make those kinds of compromises.”

SAME CAMP, DIFFERENT DAY | The original film memorably culminated with a talent show on the last day of camp, during which David Hyde Pierce’s Henry Newman, and a few science-loving campers, avoided a major catastrophe involving NASA’s Skylab space station. That said, Wain feels confident that the hijinks on Camp Firewood’s first day will be even wilder.

“There’s all sorts of storylines with major stakes,” he hints. “There’s a big musical they’re putting on at the camp, there’s a staff party, there’s going to be a wedding that day. There’s issues and problems that threaten the very camp’s existence.”

And even though the Netflix series isn’t far off from the film’s timeline, Wain insists that the prequel’s script is not merely “regurgitating” the same jokes from the movie. “We really wanted to make sure that it was a satisfying follow-up to the movie — for us, as people who love it, and the fans who love it — while, at the same time, not being a retread or trying to pretend that we’re the same people we were then,” he says. “We wanted it to be true to what we really find funny right now.”

SECOND DAY OF CAMP? | Assuming the schedules of twenty-something A-list Hollywood stars line up again in the future, Wain says he and Showalter would “love to keep going,” adding that “camp is a very fertile area for so many. For us, I don’t think we’ll ever run out of stories to tell about these characters.”

Will you give Wet Hot American Summer: First Day of Camp a try? Which Camp Firewood staffer are you looking forward to seeing again? Hit the comments with your hopes for the prequel series.