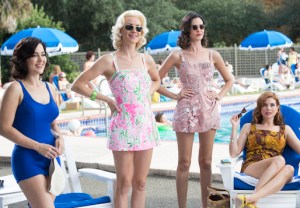 Houston, we may have a problem.

The Mercury wives and their families relocate to Texas in tonight’s episode of  The Astronaut Wives Club (ABC, 8/7c), a move that coincides with two potentially catastrophic events: the Cuban Missile Crisis and the arrival of the wives of the Gemini astronauts.

Betty? Jo? Put another casserole in the oven, because it’s time to circle the (station) wagons.

“Once the Mercury wives have figured out some of their s—t, they’ve worked out their stuff with each other, here come the Gemini wives,” says series creator Stephanie Savage. “As a general rule, the Gemini astronauts were younger, they were better educated. The Gemini flights were going to be two-man missions. The capsules were much more complicated than the Mercury capsules. So there’s this real sense of [the Mercury guys] feeling like, ‘How are we gonna protect our real estate and our seniority in a world that’s already starting to change and become more complicated?’ And it was the same for the wives.”

In advance of the episode, TVLine chatted with Savage about her space-race series, its heroines and (of course) those retro recipes. Read on for the highlights:

RELATED Blind Item: Will This Be Fall TV’s Most Divisive Event? 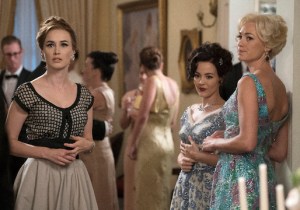 EVERYTHING’S BIGGER IN TEXAS | Expect to see the wives move on up, Jeffersons-style, once they’ve settled in the the Lone Star State. “This is the first time they’re not living in military housing, so they’ll actually have their own home, which is a big deal for them — a house that they bought that’s going to be custom-designed, that can be decorated any way they wanted,” Savage says, adding that the cash from the Life articles “wasn’t a huge amount of money, but it was certainly enough to up their game from the way they’d been living as military families. So they have some fun with that.” Also, living in Houston means being part of a big city — something most of the women have never experienced. “We see them introduced into Texas high society,” Savage says.

YOUR HIT PARADE | “My first thought was, ‘I want to use period music, but I don’t want it to feel like the American Graffiti soundtrack, like every song you hear is a giant hit and everything feels very familiar,” Savage says of the series’ soundtrack. Plus, “[EP] Josh Schwartz and I both love finding new music.” So the pair worked with music director Alexandra Patsavas to scan current tunes with a throwback vibe. “There was a lot of contemporary music that felt period right now, and it seemed like it would be fun to use it,” Savage says. “Also, it felt like it would keep the show accessible for a younger audience that’s interested in finding new music and discovering new bands.” Acts heard on the show include Bleachers, The Cashmen, Ariana Delawari and Ritchie Hart.

MISSING OUT | Watching characters like Trudy, who’s just as talented as her space jock husband Gordo, get relegated to a wave-and-smile role can be frustrating, and “That was one of the things that made me want to write the series,” Savage says. “I thought about my mom and my grandma. Knowing them as I do, and knowing how similar they are to me, they would’ve found themselves in situations like this… I’m using that as my entry point of ‘How would I feel if that happened to me?'”

ROCK OUT WITH YOUR BETTY CROCKER OUT | The recipes seen in the show — like Jo’s bacon-banana hollandaise (shudder) — come from “a combo platter” of old cookbooks and Savage’s own recollections about comfort-food favorites passed down through the years. “Jell-O salads are still consumed in my family,” she says, laughing. “We don’t turn up our noses at anything that has marshmallows, strawberry Jell-O or crushed pineapple.” The more exotic dishes aside, Savage notes that all of the potluck meals served a greater purpose for the Mercury wives while their husbands were in orbit. “It was a big deal when they had the launches. Everyone brought a casserole,” she says. “And later in the series, when the stakes get higher and things get more serious, they’re taking care of the widows and bringing them casseroles. There’s a lot of meaning in that.”

STARTING WITH THE SHEPARDS | Louise, Alan Shepard’s closed-off wife, might’ve seemed an atypical entry point to the series, given Rene’s sunny accessibility or Betty’s down-home wholesomeness. But Louise not only helped Savage give the series some symmetry — “We start with Alan’s Mercury mission, and the last mission we see in the show is Apollo 14, which is when Alan gets to the moon” — she also proved a measuring stick for the audience. “I enjoyed the challenge of writing a character that was so reserved and using her to tell the story of this sisterhood, this coming-together,” Savage says. “Because in a lot of ways, she has the farthest to go.”