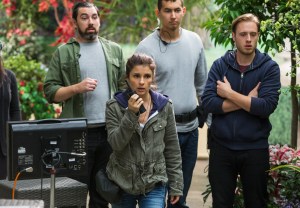 The following recap contains spoilers for this week’s episode of UnReal.

Ladies and gentlemen, mark down this week’s episode of UnREAL as the moment that Rachel Goldberg officially sinks down between Jenny McCarthy and Chris Brown on the Dregs o’ Humanity scale.

And that pains me to say, because despite all of her backhandedness, manipulation and just-plain-wrong, self-serving moves throughout the season, I like Rachel. But I also liked my old cat Nestor, who was a scratching, hissing jerk to everyone who ever visited my apartment; doesn’t mean I didn’t gladly give him up to a loving family with a bigger house for him to pee all over.

And after watching Rachel bring an Everlasting contestant’s abusive ex-husband to set, then tell anyone who’ll listen that she’s doing so to offer closure to the battered wife? And then that contestant kills herself?! Sorry, Rach, but you’re one hairball on the carpet away from losing my support.

Read on for the highlights of “Fly.”

MAMA DRAMA | Mary’s worst week ever starts, unbeknownst to her, with Chet betting Quinn that the single mom won’t make it past the week’s eliminations. That prompts the executive producer to have Rachel help Shia produce the episode’s family date, to ensure that the “Grade-A boner killer” of a segment produces some kind of intrigue that’ll keep Mary in the game. 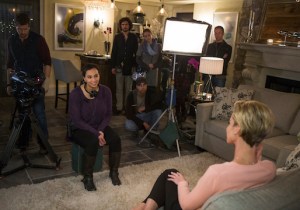 The moment Mary’s sister, Louise, shows up with her kids and Mary’s daughter, Lilly Belle, she takes a look at the wild-eyed blonde and knows something’s amiss. And Louise isn’t even privy to the private interviews in which Mary trash-talks her ex, Kirk, and mixes booze with her meds — which Shia does little to dissuade.

Mary and her very angular eyebrows are so off-kilter by the time the show films the wholesome family date (Adam and Mary making pizza with Louise and the kids), she nastily unloads on Anna who just happens to wander by and pull the kids’ focus — as well as Adam’s — with a sweet bunny Chet handed her. (Side note: Anna must be truly bored in the Everlasting house; only someone with nothing but time and a tease comb would ever get her bump that high.) But Adam makes sure Anna knows that he’s kinda into her, and they make plans to meet clandestinely after he returns from his “romantic” dinner with Mary.

TABLE IN HELL, PARTY OF 2? | No wait, it gets even more despicable: Quinn locks onto Rachel’s idea of doing something with Mary’s ex and turns it into a full-on visit to the Everlasting set for the creep. Rewind this scene, and you’ll see the exact moment whatever is left of Rachel’s soul packs its bags and leaves for Boca; it’s when she says that Kirk’s visit “could help Mary get a little bit of closure, I guess.” Yeah, temporary closure of one eye when he socks her, I suppose. Rach cements my disgust when she adds, “We’re doing Mary a favor.” Ugh.

That “favor” involves springing Kirk on Mary unawares, which leads to him going after her, Adam and Rachel — the latter saved by Jeremy, much to Lizzie’s dismay. Adam winds up with a shiner, Lilly Beth winds up with extreme confusion about her parents’ relationship and Rachel/Quinn wind up with good footage — and that’s all that matters, right?

ONE LAST DIVE | Mary gets a key before the week’s official ceremony — yay! — then has one more ill-advised interaction with Kirk — boo! — who is physically restrained but does even more damage by telling her she deserved the emotional and physical battery he dished out. So after Louise and the kids depart, Mary decides it’s time for her to do so, too. She puts on a flowy evening gown and climbs up on the house’s roof (“I have a girl on the roof and no camera!” Quinn laments, giving Mother Teresa a real challenge for sainthood), refuses to take Rachel’s hand after she clambers up there after her, and then half-jumps, half-falls to the ground below. Wow, when Constance Zimmer said the show was going to get even darker, she wasn’t kidding.

Now it’s your turn. Do you think Shia’s involvement in Mary’s pill switcheroo will come to the surface before the end of the season? Did anyone doubt that Everlasting would be back for a second season — and, for that matter, were you pleased by today’s news? Sound off in the comments!