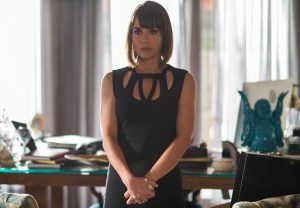 But the network’s UnReal, which goes behind-the-scenes of a Bachelor-type reality series to expose the manipulation and dirty deeds that make the show, has been surprising and provoking viewers since its premiere in early June.

“[Lifetime] wanted to prove a point that they wanted to rebrand themselves,” says star Constance Zimmer, who plays Quinn, boss of Shiri Appleby’s morally conflicted producer Rachel. “With this kind of show, you have to go all out.”

And they’re just getting started with the “OMG!” scenes. Below, Zimmer previews the most shocking moment that’s still to come and Quinn’s “very, very strong choice” in this Monday’s installment (airing at 10/9c).

TVLINE | I’ve been continually surprised by how much the series has been able to show and say, especially during last week’s episode. What have the conversations with the network been like in terms of content and boundaries?
I know that us as actors, we were constantly surprised by what we were reading in the script. We would read them and then we would say, “Oh, there’s no way they’re going to keep that in. That’s way too dark.” Or, “That’s way too crude.” Then we would be shooting them and we’d say, “Wow, they’re letting us shoot it. OK, well, it’ll probably end up on the cutting room floor.” … More and more, it kept supporting the idea that the network really was behind this show and really wanted it to be dark and gritty… It is the kind of the show that you can’t half-ass it. You have to go for it.

TVLINE | What’s been the most shocking line or scene for you that’s made it to air?
There’s something coming up in, I think it’s Episode 6, that to me was shocking, [that] I couldn’t believe we were going to do on the show — because it then tells a different story after we reveal something that happens. The ending scene [of Episode 4] with our suitor and the wife of a financier person, I thought, “There’s no way they’re going to keep it,” and they did. And I have to say, it works, because it starts showing you the world. Our show does get dirtier, and it gets darker.

TVLINE | Conversely, has there ever been something where Lifetime said, “No, we can’t do that. That’s pushing it too far”?
Yeah, there was. There definitely were some of those instances. Sometimes, those never even made it to our table read. We would just hear about them. But I know that anything that [executive producers] Sarah [Shapiro] or Marti [Noxon] felt super strong about being a part of the story, they would fight it until they would say, “Alright. We’ll do it. We trust you.”

TVLINE | We found out recently that Chet stole the idea for Everlasting from Quinn. How does it change her feelings about him and what he did going forward?
You are going to see a very, very strong choice being made by Quinn and how she feels she can get ahead. That was a very intriguing storyline to play because, as Constance, I couldn’t do the choice that Quinn makes… I don’t know, if I ever met Quinn in real life, how I would deal with her. She’s hiding a lot. The whole thing with Chet opens her up to a place that she didn’t even think she was capable of going to. That, to me, is that ever-present thing that we all think that love can do for us, but it’s also how much it can hurt you if it’s the wrong kind of love.

TVLINE | Quinn works in this very cynical job. Does she believe in love and romance for herself after manipulating all these people into these fake relationships?
I think it’s why she had allowed the relationship to Chet to go on as it has. Because if she was not in this world and she was in a different world, it would force her to look at her own self and her own relationships, and that I don’t think she wants to do. There’s something about being in that protected world of make-believe that allows her to not have to pay attention to the damaging, completely abusive relationship that she’s in. But that changes, because everybody also has their limits. 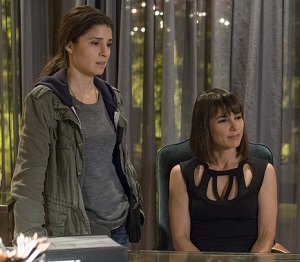 TVLINE | In a strange way, Quinn is a better mother figure to Rachel than her own mother is.
Thank you very much for saying that, because I agree. [Laughs] They’re incredibly co-dependent and definitely mother-daughter and mentor-mentee. They need each other more than they will ever admit. They can’t really be without each other, even though they kind of despise what the other does — Rachel more than, obviously, Quinn. Quinn really sees the potential that Rachel has. It’s that thing where, as a mom, you want your daughter to do what you do. … But the difference is that Quinn doesn’t realize that Rachel is hiding a lot in her job [and] that she has this guilt and she has a conscience that Quinn might have had earlier in her career, as well, but she just managed to completely hide it or hide from it.

TVLINE | As Constance, who do you want to win Everlasting? I assume you know who actually does.
Yes, I do. I was really pulling for Faith. We get to know Faith really well in Episode 5. It’s such a great episode. I can’t wait for people to see it. I’m so excited, because we start opening everything up after Episode 5. I keep saying to interviewers, “I can’t wait. I want to talk to you again when you get to Episode 10, because I really want to know if we’ve held up our side of the bargain, which is [that] every single episode gets darker and meatier and grittier.” [Laughs]