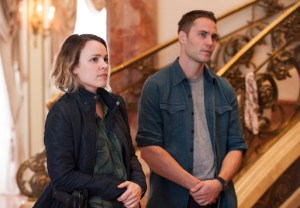 Time must be a flat circle, because this week’s episode of True Detective feels like it spins on and on and on yet is about as productive as Frank in the donation room at the fertility doctor’s office. (Too soon?)

On at least one front, however, we get resolution: Despite being shot twice in the chest in the previous episode, Ray Velcoro is very much alive. (In a moment, we’ll get to how that’s even remotely possible.) And we also get a little intel on Paul’s military time and a wealth of intel on Paul’s extracurricular activities while in the service… which explains a lot, actually.

Read on for the highlights of “Maybe Tomorrow.”

RELATED Kit Harington’s Long Hair: Is It a Clue to Game of Thrones‘ Future?

RUMORS OF RAY’S DEATH HAVE BEEN GREATLY EXAGGERATED | We open in that dingy bar Ray and Frank like so much, except this time Velcoro is sitting across from a man dressed as a cop and onstage, in place of Julee Cruise 2.0, there’s a man making AM gold out of “The Rose.” The obtuse way Ray and the officer — whom we later learn is his dad — talk (“Where is this?” “I don’t know. You were here first.”), the fact that Ray doesn’t realize until he looks down that he’s bleeding from the torso — yeah, it’s a dream, and when Ray wakes up rather suddenly on the floor of the creepy sex house, he’s shocked that he’s alive and slightly dismayed to see he’s peed himself.

The man in the crow mask used rubber bullets — “Riot shells. Y’know, like cops use,” Ray tells Ani when she shows up — which broke a few ribs and cracked his sternum but left him among the living. Later, Ray demands to know where Semyon got his intel on the house. “You walked me into something, Frank,” the cop murmurs, but Frank gives him very little assistance yet a whole lot of veiled threats. After all, he’s got problems of his own…

LIMP BUSINESS | Frank’s list of #underworldproblems goes something like this: He’s forced to shake down a contractor to recoup a little cash; the Eastern European shady guy from Episode 1 backs out of the deal he and Frank had; a Semyon henchman turns up dead; and then Santos disrespects Frank in front of all of their criminal friends, so Frank has to beat the poo out of him and rip out his ridiculous grill with pliers. (Thank you, True Detective, for sparing us the visual on that moment of dental torture.) Oh, and to make everything even sadder, Frank’s pocket mobster won’t stand and deliver when he and Jordan are at the fertility center — and this development causes Frank to lash out and tacitly accuse his wife of being the all-around problem. (After all, his guys have “phenomenal motility.”) She rightly tells Whitey Not-So-Bulger to shove it.

ALL FIRED UP | Especially in light of the shooting, Ani’s superiors want dirt on Ray. “Guy’s a burnout,” she says, but that’s not enough for the state; the higher-ups suggest that Ani use her lady powers to seduce the truth outta him. Uh, that’s totally appropriate and likely to happen! Meanwhile, Ray’s bosses are mad that Ani and Paul went to the sleazy Vinci mayor’s sleazy Bel Air house and talked to his sleazy family; they want the Caspere murder closed as soon as possible, preferably by pinning it on one of Caspere’s hookers’ pimps.

Later, after Bezzerides and Velcoro have established that Caspere was involved with a film shooting nearby and that the car that carried his body to that lookout point was also tied to the movie, someone sets Ray’s car on fire as they’re questioning the car’s former driver. The pair chase the masked man onto a highway, and then Ray has to push Ani out of the path of an oncoming car, saving her life. “Tell me what the state has on me,” he demands immediately after. “I don’t know,” she replies.

THE GENTLEMAN DOTH PROTEST TOO MUCH | Paul and a friend from his armed forces hang out, and a friendly night out turns into a night of reminiscing about what they did overseas: each other. “Them three days? I think about you, man,”  the friend says, angering Paul so much that he shoves him to the ground and then stalks away as the man apologizes. Fits with his gay-hating story from last week’s episode, no? From a distance, the slovenly Vinci detective also assigned to the Caspere investigation snaps photos. Also of note: Whatever happened during Paul’s military tenure, it required him to go to meetings for a year after his return and involved “finding the squad.”

Later, after questioning some hookers leads him to Santos’ club (and the prostitutes employed within), Paul talks to a male-for-hire who once went on a “date” with Caspere and that Tasha that we heard about earlier in the series. (Side note: Paul’s heavy drinking in this scene is very strange, right?)