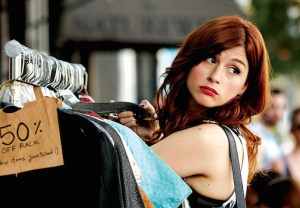 The courtship of You’re the Worst‘s Gretchen and Jimmy was basically the stuff of Nora Ephron’s nightmares — and don’t expect their cohabitation to go any differently, star Aya Cash says.

Because if FX’s anti-rom-com taught us anything, it’s that a narcissistic novelist and an impulsive publicist aren’t the kind of people to gently ease into sharing a living space.

“It pretty quickly turns,” Cash tells TVLine, adding that creator Stephen Falk made sure that “it’s not a whole season about, ‘My God, there’s a tampon in the toilet!’ or ‘My God, where do I put my clothes?’ There are those moments, because that’s real, but it very quickly turns to something… I’m going to say ‘deeper.'”

VIDEO Emmy Screening Room: Chris Geere at His Best on You’re the Worst 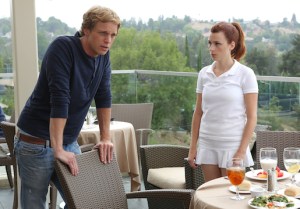 Some of that depth comes from the fact that neither Jimmy nor Gretchen “has ever dated someone who is their equal, and that’s in the most positive and negative way,” Cash says. “All relationships are a seesaw of power and who’s more into it; this is a couple that really balances each other and both care deeply for each other — even if not for the typical reasons.”

The couple’s atypical attraction during the first season of the comedy gave Cash plenty of opportunities to play her self-involved character for laughs (and to earn herself some real estate in the Outstanding Leading Actress category). The actress says she had a lock on Gretch from her first read-through of the first script.

“I was like, ‘I get her. I get this. This is something that I feel I could contribute to and that I could be really comfortable in, and also challenge myself and all those things that you look for as an actress,” Cash tells TVLine, laughing as she adds, “FX didn’t know immediately that I was the right person for the job, but I certainly thought I could be.”

Season 2, which will air on sister network FXX, will have a different feel, the actress previews — in part because of the darker second half of the season Falk has mentioned in interviews.

“I respect so much that Stephen’s not just putting out what worked last year and going, “OK, people liked this. We got good responses. Let’s do that exact thing again,'” she says. “A lot of the world that Stephen built comes back, and you see a lot of the side characters… coming back in their own capacity. But there’s also a real push to deal with some stuff,” including the aforementioned more dramatic storyline that will “touch everyone.”

She adds: “We have no idea what the reaction to that [will be], but I would much rather be making something that pushes the boundaries and is exciting and you don’t know what’s going to happen next, rather than a complete fan fantasy of ‘We just get to see the same thing over and over again. I really respect Stephen and the writers for going there.”

Like Gretchen absconding with Becca’s food processor, we’re not leaving this interview without getting Cash to give up at least one intriguing spoiler. She doesn’t disappoint.

“There’s an episode we’re about to film that I feel like [belongs] in a completely different show. It makes sense in the context of the season, but if you just started our show on the episode we’re about to shoot, you’d be like, ‘Wait, what’s this show about?'” she teases. (Look for the installment to air in the second half of the season.) “It’s going to play with tone and it’s going to play with, I don’t know if ‘genre’ is the right word, but it really turns things upside-down — and it’s all still very funny.”