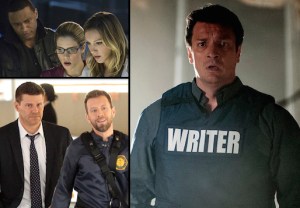 Who’s hanging with the Castle newcomer? Is Arrow downloading a new computer whiz? Who’s heading back to Bones? Will Rookie Blue have baby blues? Read on for answers to those questions plus teases from other shows.

Any scoop about Castle Season 8? –Fred
There’s no good way to say this, Fred, so let’s just rip the Band-Aid off and let the Internet take it from there: As Season 8 gets underway, Rick will be spending a lot of time with Hayley. #JustTheMessenger

Any fresh scoop on Defiance? –Craig
If you, like me, think the show has been a bit conspicuous about displaying the forehead wounds where Nolan and Irisa had been connected to that pod for several months, it’s for good reason. Grant Bowler told me that towards the end of the season, that onetime “connection” will come back into play and “lead to the best episodes Steph[anie Leonidas] and I think we’ve ever done. It’s really, really cool.”

What can we expect from the new season of Bones? –Katia
What you can expect is a (likely) revisiting of Hodgins’ brother Jeffrey. “We were dying to see his brother [in Season 10], but there was an availability issue with the actor (Jonno Roberts),” EP Stephen Nathan told us. “But we will definitely see him again. It’s a wonderful storyline, one that we definitely want to go back and explore much more.”

Your Orphan Black post mortem was a little light on my soul seestra Alison. Anything to share for Season 4? –Jeannie
Remember how Helena went all killer crazy and murdered those drug lords? That bloody massacre may come back to haunt Alison’s happily ever after with Donnie. “The Hendrixes are still bonded, but there’s a few things that happened at the end of the season that could have some impact going forward,” executive producer Graeme Manson teases.

Is it October yet? Dying for some Arrow scoop! –Catarina
I can’t let good Arrow fans up and die, now, can I? In the second episode of Season 4, the CW hit will introduce the heavily recurring character of a twentysomething African American male who is a technological savant on par with Ms. Smoak. Maybe during Felicity and Oliver’s romantic retreat, Thea/Diggle/Laurel had to recruit a new computer whiz via Craigslist…? UPDATE: Or better, as readers have suggested, he’s Felicity’s H.I.V.E. counterpart/adversary?

Any scoop on Beauty and the Beast, please? –Anna
Nearly wed Heather’s romantic loss will be her engaged sister’s gain. As Jay Ryan explained to me, “Because Heather has 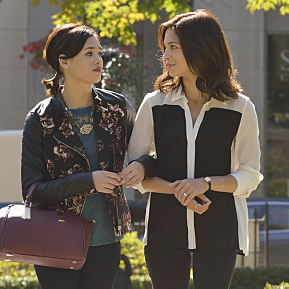 had so much experience at actually organizing weddings, though she has yet to walk down the aisle herself, she is a great help once Vincent and Catherine get caught up in the hunt [for the supernatural beings]. They don’t have time to be a normal couple and plan what the cake topper’s going to look like, so Heather comes to the rescue on that side – which is a huge relief!”

Any scoop on Rookie Blue? Preferably whether or not Marlo’s baby is really Sam’s?? #pleasesayitisnt –Kira
The little one is definitely his, but rest assured, the very unexpected bundle of drama is not about rekindling the Sam/Marlo romance. “We didn’t want to do a love triangle,” executive producer Tassie Cameron says. “We wanted to do a life triangle.” (Rookie Blue returns Stateside this Thursday on ABC.)

Coooome oooon, TVLine! Give me scoop on Falling Skies! – Wrier
That “beautiful”… whatever… that Tom saw at the very end of Season 4, upon waking up from his detoured trip to the moon? I can confirm that some commenters on my finale recap guessed correctly its identity. This… whatever… promptly suggests a rallying cry to Tom, one that will rub some of his comrades in the 2nd Mass the wrong way after he (somehow!) gets back to Earth.

What was the name of the song and artist played at end of The Last Ship‘s two-hour premiere? –Tim
That was “To the River,” by Down Like Silver.

Do you know the song that played during the Killjoys scene where Dutch throws her spider necklace? –J.
Look at me, I’m like a cuter Shazam this week. That tune was “Wicked World,” by Marco DiFelice and Trevor Yuile.