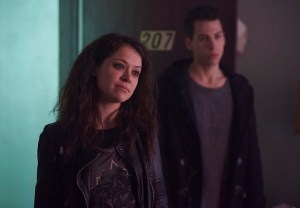 Warning: The following post mortem contains spoilers from Saturday’s season finale of Orphan Black. Proceed at your own peril.

It wouldn’t be an Orphan Black finale without a fatality — or (perhaps) two.

Although Rudy definitely succumbed to his genetic defect, Delphine’s future was left more ambiguous at the close of Saturday’s Season 3 climax. After discovering that Neolutionists had infiltrated Project Leda and Castor, the scientist was warned by Dr. Nealon that she wouldn’t live to see tomorrow — and she actually might not given the gunshot she suffered.

Meanwhile, Helena reunited with “boyfriend” Jesse, Rachel was held captive by her Neolutionist mother, Alison won the school trustee election, and Delphine and Cosima shared a (unbeknownst to Cosima) last kiss. As for Ms. Original, Sarah whisked Mrs. S’ mom away from danger to Iceland, where she finally got to hold her little monkey, Kira, again.

TVLINE | This felt like a very different finale for the show. There weren’t huge cliffhangers, aside from what happened to Delphine, which we’ll get to. Was that a conscious decision to give the sisters a respite?
Yeah, I think so. The first three seasons, if you put them all together, they barely took a breath. So we wanted to [do] a bit of a reset, put our sisters as close together as possible at the end of the season. It’s been a journey for them. That scene with the whole clone club [at the dinner table] was an important [one] for us.

TVLINE | Was Alison’s speech about the sisters being brave and letting her do what she needed to do a commentary on fans saying that Alison’s storyline is very separate?
It’s never separate to us. It’s all part of the complete, complex tone of the show. She’s separated by tone more than by heart. Throughout the season, we spoke about [how] it’s a part of Sarah’s newfound responsibility to carve out that time for Alison to be normal. And Cosima, too. It’s like an agreement. It’s like a victory for all of them. 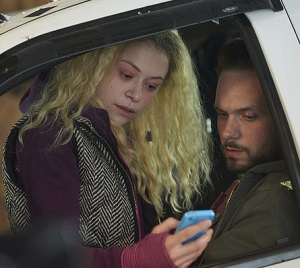 TVLINE | She also tried to give Helena a piece of a normal life. Do you see Jesse’s return as representing that for Helena? Can she actually have that?
Yeah, I think Helena has an innocent heart. That’s her first fumbling towards love – with a partner anyway. She’s certainly found love with her sister first.

TVLINE | Going back to the cliffhanger: Delphine was shot, but was she killed?
I don’t know. Did you see her die?

TVLINE | Her last words were, “What will happen to her?” I assume she’s referring to Cosima. 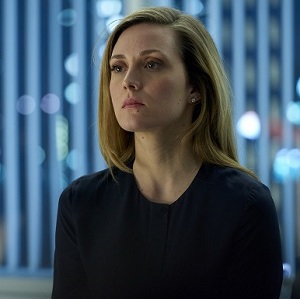 She was, of course. Her journey this season stemmed from her promise to Cosima in the last season. To me, that’s a true journey of love and heroism and sacrifice. And it’s one we worked really hard on with Evelyne Brochu. When you look at her performance over the course of the season, it’s very dramatic and satisfying.

TVLINE | What makes the Neolutionists a more dangerous foe than, say, Dyad and Castor?
They’ve been through slaughter just to fight their way through these factions and now they’ve discovered that there’s one real force behind it all. It’s doubling back to the very beginning and the first face we saw of Neolution, which was the sort of pop-culture Dr. Leekie face. That philosophy appears to be far more deep-rooted than we’ve known so far. That’s the journey we’re going to go on next season.

TVLINE | Charlotte used to be in the custody of Marian. Does that mean Marian is a Neolutionist?
No, not necessarily. In fact, no, I don’t think so.

TVLINE | So there’s a story as to why Charlotte’s now with the Neolutionists.
Oh, there’s got to be.

TVLINE | What was with that creepy worm Dr. Nealon tried to insert into Delphine?
It’s the expansion of the body-horror motifs that we really like in Orphan Black. Dr. Nealon said the tech is beyond whatever you believe. We’re opening up a little window into some interesting biotech elements in our next season. 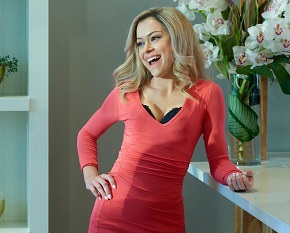 TVLINE | What’s Krystal’s state? Is she still in Dyad?
We sure enjoyed that character. The [scenes introducing] Kystal in Episode 8 were some of my favorite of the year, especially [the ones] with Jordan [Gavaris]. Jordan was awesome. We always wanted to do that story about a clone who’s naive and you’re choosing to leave [her] naive. We’d like to see Krystal next year, and it’ll be that question again, “Do you tell Kystal? Or will Krystal find out?” Because she’s not what she appears. She’s not a bimbo.

Orphan Black fans, stay tuned to TVLine for even more scoop. In the meantime, grade the season ender via the poll below, then elaborate in the comments.