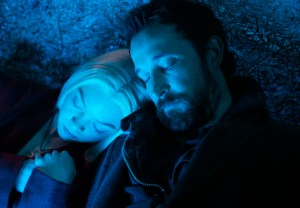 A few weeks ago, when TNT’s Falling Skies indicated that our heroes were going to need to visit the moon in the name of having any chance at beating the Espheni, I had concerns.

How will they get there? And in a timely manner? Who in the 2nd Mass has anything remotely resembling training for such a journey? Will Aerosmith give the rights to “I Don’t Wanna Miss a Thing”? And so on.

Sunday’s two-hour Season 4 finale, which revolved around Tom Mason’s trip to said ball of cheese, with hybrid daughter Lexi in tow, was not as goofy as I feared, but boy, did it leave much to be desired. For one, the first hour wasted too much of our time with a ruse that everyone had to see coming up Broadway — that Tom had only imagined the trip going off without a hitch, returning to an ebullient, ready-to-party 2nd Mass (and frisky Anne).

Once Tom got wise to the fakery, we then got a bunch of psycho-babble as he argued with Lexi via cyphers of his many comrades. Ultimately, once he confronted (a much-better-as-a-brunette) Lexi herself, he realized that she was cocooned with him aboard the Beamer, and they agreed to team together to snap out of their dream state.

That (finally) teed up a second hour in which Tom and Lexi tried to solve a big problem on the Beamer (a fracture in the hull damaged the bombs meant for the moon-based power core), while the show bent over backwards to drum up drama for those back on Earth. Cue the introduction of “egg” bombs that explode with a fog that entraps its victims, so that those harness critters can skitter-ize them.

This idea… was clumsy.

You had Pope lying still in the muck, acting helpless, until a desperate moment led him to (amusingly) bite into a critter’s artery; Hal seemingly was able to pick them off repeatedly with a pistol, while he awaited rescue from Ben and Maggie; Sara (the role still doing Mira Sorvino no favors) resurfaced to somehow shoot a critter off of Dingaan’s chest from directly above him without killing the guy in the process; and Anne went all Sarah Connor with a flamethrower upon realizing the fog’s weakness. Lives were briefly put in jeopardy, but not really.

It all led to the matter of exploding the power core, which Lexi realized she could accomplish by flying a kamikaze mission with the Overlord ship that had intercepted the Beamer — meaning, Tom had to fly back alone. And as Lexi manually steered the larger ship toward the target, Espheni fighters showed up to attack Tom — but Cochise’s father arrived with the Calvary in the nick of time. Alas, once Lexi blew up the power core (pretty girl, but good riddance!), the shock wave propelled Tom off course, destination unknown. Anne got that news toward the very end, uncertain that the Volm will be able track down a “needle in an ocean.” In the meantime, the 2nd Mass will set out to “kick some ass,” with the Espheni now sitting ducks. on a wayward Beamer — awakening in what looked like one of those economy Euro-style hotel rooms, a melange of voices (including a JFK speech) breaking the silence. A female voice beckoned him, and Tom turned to see… some new sort of, ominpedal E.T. standing in the doorway. His reaction: “You’re beautiful.” (And until the fifth and final season arrives next summer, we’ll take his word for it!)

Again, a first hour that you had to slog through, and a second-hour plot device that owes credit to both The Blob and The Fog. I’ll give props, though, to the nifty twist where a seemingly down-for-the-count Tom used the poison syringe Hal slipped him (to use on Lexi if necessary) to subdue the Overlord. Now, I’m curious-ish to see what Ursula there has to do with Tom getting back to Earth in Season 5, as well as what new obstacles the (sparse) 2nd Mass will have to face.