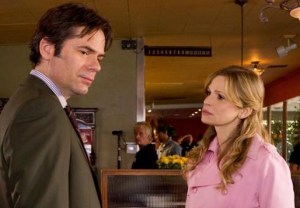 If legal lizard Phillip Stroh resurfaces in the flesh on Major Crimes, he likely won’t be alone. Ideally, his longtime adversary — played by The Closer‘s Kyra Sedgwick — will be there to watch him pay for a litany of crimes.

When last we tuned into TNT’s spin-off of The Closer, clever testimony from Sharon Raydor’s ward, former street rat Rusty Beck, seemed to seal serial rapist/murderer/stalker Stroh’s fate. But, Major Crimes creator James Duff reminds, “That was just a pretrial hearing,” at which Stroh was a “sick” no-show. “We have not made a deal nor have we had the trial.”

If and when that long-running arc is revisited, Duff says it is his “dream” to have Billy Burke — now no longer swinging swords on Revolution — finally reprise his role as Stroh. “He’s a wonderful actor and he’s a fantastic presence on screen — one of the best villains we ever had,” Duff raves.

But were Burke to finally make his Major Crimes debut, the significance of the situation would all but demand former MCD boss Brenda Leigh Johnson’s presence, as well. “That’s the thing — I’d like to have them both there,” Duff says of Burke and titular closer Sedgwick. “And it would have to be a two-parter.”

Duff says he tried to get Burke on Major Crimes for the aforementioned Season 2 finale, but Revolution‘s shooting schedule prevented the actor from  slipping away for even just the nine-hour courtroom shoot. “All he had to do was sit there,” Duff notes with a chuckle. “I think he would have had one line, which is, ‘Hello, Rusty.'”

With Revolution now cancelled by NBC, Duff is holding out hope that Burke will be available for any such critical encore, should the day come.

“There’s a great move to make there that we have not made” with regards to resolving the Stroh storyline, which started on The Closer in 2009, Duff acknowledges. “And believe me, I’m plotting!”

RELATED | TNT Sets Summer Premieres for Rizzoli & Isles, Dallas Season 3B and Others

Major Crimes kicks off Season 3 Monday, June 9 at 9/8c — keep your eye on TVLine for an upcoming in-depth preview from James Duff.