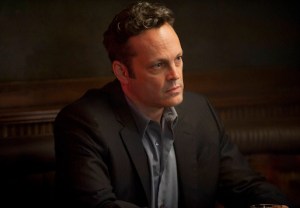 Remember when being a TV cop meant being a cool badass instead of being an emotionally frayed burlap sack of misery?

It’s not hard to imagine Officer Frank Poncherello shaking his head in shame at True Detective‘s men and women of California law enforcement, so woeful are their backstories, so apparent is their sadness. The Season 2 opener does little more than introduce these featured cops and tee up the crime that kicks off their shared narrative — and that’s compelling enough to make you want to come back next week — but oof, is it tough to witness so much unhappiness.

In a moment, we’ll want to get your take on the HBO series’ premiere. But first, a quick rundown of this season’s main players and the murder that ties them all together:

RAY VELCORO | Colin Farrell’s (Winter’s Tale) character, a detective in the fictional California town of Vinci, is the first character we meet, and — bolo tie notwithstanding — he seems like someone you might wanna grab a beer with: He’s a divorced dad who’s trying to get more custody of his preteen son, and a cop who’s got the hangdog look of a public servant just following orders. But as the hour progresses, we learn that Ray is a hard-drinking mess who carries out violent tasks on behalf of a local mobster and beats a suburban dad bloody after his kid bullies Ray’s son.

FRANK SEMYON | Vince Vaughn (Wedding Crashers) plays it completely straight here as the mobster with ties to Ray. Frank is married to Jordan (Kelly Reilly, Sherlock Holmes: A Game of Shadows) and is trying to go legit, via his involvement in the building of the Golden State’s central rail line. He is measured. He acts swiftly (such as when he has Ray beat down and burgle a reporter doing a story on corruption in the county). And he starts to subtly freak when one of his business partners goes missing.

PAUL WOODRUGH | Taylor Kitsch (Friday Night Lights) is all “just the facts, ma’am” as a motorcycle police officer who has the misfortune of pulling over a speeding actress and winds up getting suspended from the job he loves when she lies and says things got improper. “The highway, it suits me,” he asserts to his boss, who tells him he won’t be going on patrol for a while. Woodrugh is a war veteran with a scarred shoulder — “from before,” he tells his girlfriend (?) after popping Viagra and giving her a ride on his hog — and, apparently, a death wish: He leaves his lady’s bed to speed his bike, without a helmet and a headlight, up the Pacific Coast Highway. When he thinks better of his foolish actions and comes to a skidding stop in Ventura, he finds a corpse sitting on a bench and wearing sunglasses, Weekend at Bernie’s-style.

THE MYSTERY | The dead man (whose eyes have been burned out) is the aforementioned missing business partner, a corrupt city manager named Ben Casper whose case Ray was assigned at the top of the episode. Ray and Ani (and her partner, Elvis) are called to the scene, where Paul still is, and boom: They’ve all got a murder to solve.

True Detective‘s stylized writing is sharp, the plot is gripping and the opening credits so chilling (anyone else really, really creeped out by that Leonard Cohen song?) that I’m definitely in to find out Those Who Brought Us The Spaghetti Monster have planned for the season. Plus, I’ve gotta find out what Paul’s Black Mountain comment — “We were working for America” — is all about.

That’s what I thought; now it’s your turn. Grade the premiere via the poll below, then hit the comments to elaborate!