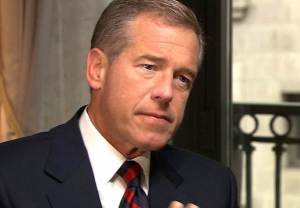 In his first interview since stepping down as host of NBC Nightly News amid controversy, Brian Williams said he takes total responsibility for making false claims about his role in various incidents over the course of his career.

“I own this,” Williams told Today host Matt Lauer in a sit-down that Lauer earlier said had no conditions or guidelines. “I own up to this.”

The anchor elaborated on comments he’d made in an official statement released Thursday, when the network announced that Williams will become an “anchor of breaking news and special reports” at MSNBC when his six-month unpaid suspension is complete.

A seemingly chastened Williams said he’d been going over the “black box recordings from my career” to figure out why he’d allowed the strict grasp of the facts he employed during news broadcasts to loosen when telling stories on late-night talk shows and in other venues.

“I used a double standard,” he said, blaming his ego for feeling the need to be “sharper, quicker, funnier” than others. “Something changed. I was sloppy, and I said things that were untrue.”

In addition to his new position at the cable news network, Williams also will fill in for breaking news at NBC when Lester Holt, NBC Nightly News‘ new anchor, isn’t available.

The controversy surrounding Williams began during a Jan. 30 broadcast of Nightly News, when he falsely claimed his helicopter was hit by a grenade in March 2003 as he covered the Iraq War. In the weeks that followed, more of Williams’ anecdotes about reporting in the field were called into question.

Calling his suspension both “torture” and “absolutely necessary,” Williams vowed that he has done the necessary introspection to make him once more worthy of the public’s trust — but he knows it’ll be no easy task.

“What has happened in the past has been identified and torn apart by me and has been fixed, has been dealt with. And going forward, there are going to be different rules of the road,” he said.

He added: “I am sorry for what happened here. I am different as a result, and I expect to be held to a different standard.”