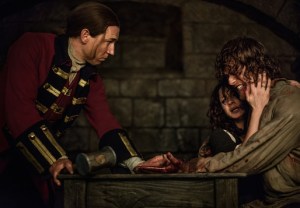 Outlander‘s Tobias Menzies is sitting in a Manhattan hotel lobby and conversing so casually, a passerby might think he’s discussing the weather or a recent sporting match.

“Sam and I both felt that it couldn’t just be the fact that I f—k him,” Menzies says. “That wasn’t enough.”

It’s a few months before the Starz’s historical drama’s intense first season finale — which aired Saturday — and the actor is recalling shooting the crowning episode, which includes his character’s graphic rape of Sam Heughan’s Jamie.

In addition to the physical violence depicted during the hour, the mind games Randall plays with a wounded and disoriented Jamie make for “the most complete recitation you’ve seen so far of Jack’s sadism, really,” Menzies says. “It’s the tenderness, the precision, the emotion, the lovingness of it, which makes it more chilling.”

He adds that the fleeting touches and loving gazes Randall directs at his victim — as well as Jamie’s unwilling response to them — are what will ensure that the incident stays with Fraser into Season 2 and beyond.

Randall “wants to take him apart, find out what makes him tick. He intuits that Jamie’s well-being, his rock, is this woman, Claire. And so he attempts to poison that relationship,” Menzies says.

“There’s a moment when I get him to respond physically and emotionally, and that’s the thing that Jamie could never forgive himself — that he was somehow turned on,” he adds. “And out of that would come a sense that maybe he couldn’t be the man he wants to be to Claire.”

As viewers saw Sunday, Claire eventually is able to get through to her violated, ashamed husband with a combination of unwavering support, some if-you-die-I-die-too sobbing and a little manhandling — “It’s an interesting way she goes about it,” portrayer Caitriona Balfe tells TVLine with a wry smile when the topic comes up the day after Menzies’ interview.

“Her methodology is quite strange, but it works for them, and that’s what I love about them as characters,” she continues. “It’s not always pretty, it’s not always the easiest way, but they always manage to fight their way through and be there as refugees for each other.”

She adds: “It’s quite beautiful how they manage to limp their way to the finish line.”