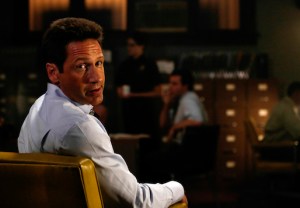 That’s just one of the historical nuggets revealed in Aquarius, NBC’s new period drama that chronicles the lead-up to the horrific killings perpetrated by Manson’s followers in 1969. In a moment, we’ll want to hear what you thought of the two-hour premiere. But first, a quick recap:

As Hodiak and Shafe soon learn, Emma has fallen in with Manson (Gethin Anthony, Game of Thrones) and his “family” — a house full of teens and 20-somethings sharing a house, beds and lots of drugs, all in the service of a loosely defined mission. At the series’ start, this means they’re all somehow helping the bearded criminal (he’s also a pimp and con man) achieve his dream of getting a record contract, a goal he pursues with shifty-eyed zeal.

But underneath all of the peace, love and flower power lies the darker story of Manson’s connection to Emma’s father, Ken (Brian F. O’Byrne, Prime Suspect), Charlie’s former lawyer, current blackmail subject and on-again, off-again sex partner. (Seems like a good time to note that, unlike many of the characters in the series, the Karns are fictional.) In Aquarius‘ second hour, we find out that Manson is gunning for Ken to introduce him to a music-label executive, and he’s not willing to hear the word “no.”

The series takes place in 1967, which means we have two years before Manson and his family commit the infamous Tate-LaBianca murders that will end numerous lives and land Manson in prison for life. But at this point, all the police — including new-to-undercover-work office Charmain (Claire Holt, The Originals) — know is that Manson’s a low-budget thug who makes their jobs tougher. Indeed, even the audience hasn’t quite seen what Manson is truly capable of, though it’s hinted at in his rape of Emma and his brutal attack on a shopkeeper.

Meanwhile, Hodiak and Shafe are occupied with other crimes — such as the murder they investigate in the premiere’s second hour — and local figures like Gaius Charles’ (Friday Night Lights) Bunchy, a vocal Black Power advocate. The two men also have various intrigues going on at home. Hodiak’s son is a soldier AWOL from the Vietnam War because his mom, Hodiak’s ex, faked a terminal illness to get him leave, while things are certainly not over between Hodiak and Grace Karn. Meanwhile, underneath the scraggly beard and fringe jackets, Shafe is a husband — the series makes a point of showing us he has a black wife — and father.

Aquarius‘ music is great and its visuals rich, and with Duchovny deadpanning (though, it needs to be said, not merely offering up RetroMulder) his way through the proceedings, the latest series from creator John McNamara (Profit) has a lot of eerily intriguing promise.

Now we want to hear your thoughts. Grade Aquarius‘ premiere via the poll below, then back up your choice in the comments.