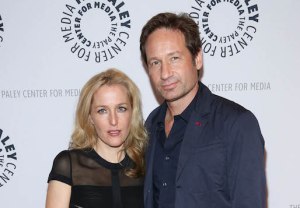 While chatting with TVLine about his upcoming projects — which include NBC’s Aquarius and Fox’s much-buzzed-about X-Files revival — Duchovny confirms that he’s seen the continuation’s first script and offers this tease. (You might want to sit down.)

RELATED Fox Fall Schedule: When Will The X-Files Revival Air?

Perhaps of more interest, albeit to a certain sect of Mulder-and-Scully fans: Duchovny gently shoots down the notion that he and co-star Gillian Anderson have ever been anything more than the FBI’s Most Unwanted.

“The whole thing about Gillian and I dating is so weird. It’s never happened, it’s not going to happen, we’re friends,” he says. “I don’t want to rain on anybody’s parade, but no, it’s not gonna happen. It hasn’t happened.”

The rumors, which have been present for years, made their rounds on the Internet again last week after Anderson joined Duchovny onstage during a recent concert to promote his album Hell or Highwater in New York.

“I see Gillian, I kiss her hello. She’s my friend. If somebody gets a picture of that, if it’s on stage and she comes up to sing with me, I’m going to kiss her hello,” he says. “I wish the show would be enough. I don’t understand why people want more from Gillian and I. I really don’t.”

He adds: “You can have Mulder and Scully, and that’s gonna have to be enough.”