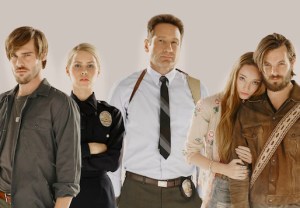 Not because you’ll find horrifically gory photos, or because you’ll be reminded of one of the most terrible home invasions/murders in American history — though both of those are true.

The main reason the 1969 killings of pregnant actress Sharon Tate and seven others, perpetrated by Charles Manson and a gang of devoted followers, will mess with you is because the crimes made no sense whatsoever, Aquarius star Grey Damon says.

“This thing just happened,” says Damon (Friday Night Lights), who studied up on the murders to prepare for his role as an undercover cop in NBC’s ’60s drama. The series centers on Manson — and the police pursuing him — and starts in 1967, two years before his “family” commits the random, heinous acts. “What’s really scary about it is just humanity, how unpredictable it can be.”

‘THE MYSTERY IS WHAT HAPPENS IN HISTORY’ | Woah. In the parlance of the time: Heavy, man. So before we go too far down the helter-skelter rabbit hole, let’s regroup. Aquarius, from John McNamara (Lois & Clark: The New Adventures of Superman), also stars X-Files alum David Duchovny as Sam Hodiak.

Duchovny’s character is a clean-cut, old-school police detective asked to investigate the disappearance of a former girlfriend’s teen daughter (played by Bunheads‘ Emma Dumont). To that end, Hodiak partners with Damon’s shaggy Brian Shafe to infiltrate the counterculture and soon is on the trail of a shady ex-con/wannabe singer-songwriter named… Charles Manson.

Duchovny says that at first, his character has no idea what Manson and his group can do.

“Hodiak does not see him as murderer, for sure,” he tells TVLine. “He sees him as a punk, not even as a worthy adversary. He’s a pimp. He’s a con man. He’s manipulating very young women and young boys. Hodiak knows exactly what Manson is doing and how he’s doing it. It’s not a big mystery.”

He adds: “The mystery is going to be what happens in history. That, Hodiak does not see coming.” 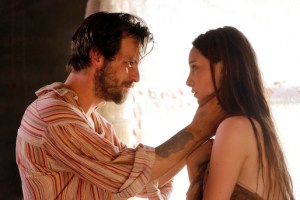 A KILLER ROLE | Gethin Anthony (Game of Thrones‘ late Renly Baratheon), who plays Manson, wants to be very clear: He makes no excuses for his alter ego’s actions. But while trying to fathom them, the actor realized that Manson had been in one kind of prison or another from a very young age, only to find freedom in an anything-goes city at the height of sex, drugs and rock’n’roll.

“In no way does that condone any of the events that took place, but it does help you understand,” Anthony says. “This individual went through the most extreme switch of circumstances and was around very impressionable young people, as well.”

One of those impressionable kids is Dumont’s character — the fictional Emma Karn — who meets Manson at a party and is assimilated into his gang before she even grasps what’s happening. The scene of her official, not-so-consensual initiation, so to speak, is hard to watch. “Her life changes literally overnight,” Dumont says, maintaining that while shooting poor Emma’s descent into criminality, “There was never a time where I was like, ‘This is scary.'”

Anthony can’t say the same. “Some of the moments, the headspace that [the script] put me into was quite a foggy, dark space,” he recalls, remembering one very dodgy sequence involving Manson and his mom. (You’ll see it in later episodes.) “I had to connect to family things that I didn’t want to connect to or create for myself.” He laughs. “I mean, I’m pretty sure I’m the only person who wasn’t out and about in L.A. on Halloween. I was happy just to kick back and have some M&Ms.” 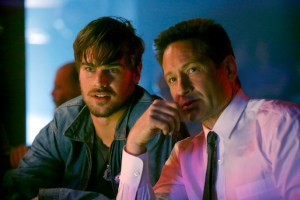 BLEAK SNEEK PEEK | The 13-epiosde season — which will be released in its entirety online immediately following Thursday’s premiere — is infused with a sense of dread: After all, Manson’s victims are going to meet their grisly ends in two years’ time, no matter what.

However, “We do have small wins,” Damon previews, “and some big wins, too. Manson is our main villain, but not our only villain.”

Duchovny’s take? The series’ dark, desperate nature is one of its most attractive assets.

“It’s very interesting to me that you have this murder looking on the horizon of the show that is inescapable, and your two ‘heroes’ who are put in charge of making sure that doesn’t happen, aren’t going to be able to do that,” Duchovny says. “So there’s something tragic about Shafe and Hodiak that I like a lot.”