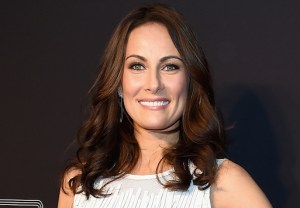 Sadie Stone might have left Nashville before the end of the season, but Laura Benanti‘s heart is firmly ensconced in the ABC drama’s goings-on.

Take, for instance, her thoughts on Deacon’s sister Beverly, a hard-to-love character who grudgingly donated part of her liver to her ailing brother and who might have died at the end of the season finale.

“That beyotch!” Benanti says, chuckling. “Ugh, she’s so crazy. I hate her!” She calls out the title of Scarlett’s ballad of pain, inspired by Beverly’s borderline abusive mothering. ‘Black Roses! Black Roses!'”

RELATED Nashville EP on the Mystery Flatliner, Hope for Juliette and Why the Hospital Wedding Almost Really Happened

When not railing against the injustices of Scarlett’s childhood, Benanti is a busy woman these days. She recently wrapped The New York Spring Spectacular at Radio City Music Hall, she’s writing a book of humorous essays inspired by her anything-goes tweets, she’s signed on to star in a Broadway revival of She Loves Me opposite How I Met Your Mother‘s Josh Radnor, she’s Supergirl‘s mom, and she’ll take the stage Sunday for PBS’ live National Memorial Day Concert (check local listings).

TVLine recently caught up with Benanti for a quick chat in advance of the patriotic performance.

TVLINE | You’ll be singing from the West Lawn of the U.S. Capitol in Washington, D.C.
I’m so excited about that.

TVLINE | What are you singing?
I’m singing a medley of patriotic songs.

TVLINE | You’ve done stuff like this before. Do you have a favorite patriotic song? Any that you dread?
I’ve never done the Memorial Day concert. I’ve sung at the Ford [Theatre’s Annual] Gala, I’ve sung at the Kennedy Center. But this is on the lawn. It’s for 300,000 people or something like that, so I’m terrified. Fortunately, I’m first. So I can go and then relax. But no, I don’t have a favorite patriotic song, nor do I have a least favorite. It’s not like, “Oh, that patriotic song drives me crazy.” [Laughs]

TVLINE | These songs have been around for forever, and they’re sung all the time. Is it ever hard to connect to them emotionally?
There’s so much nostalgia in them for me. They’ve gotten our country through trying times. So if you can tap into the pride of that and the heartwarming quality of that, the unity that it creates for Americans, it can be a very personal thing. I think about my family, who fought in wars. So no, I don’t have a hard time connecting to songs like that. And Larry Grossman is a wonderful arranger, and he’s putting it together, so I’m sure it will be beautiful.

TVLINE | Your reaction to Nashville‘s Deacon possibly dying at the end of the season?
[Gasps] He’s not gonna die.

TVLINE | Luke and Sadie were getting closer just before your character left town. You’d said before that they were just friends; did the development surprise you?
No, I think that I smelled that coming. What I do appreciate that they did, Sadie definitely put hos before bros. Even though she felt a connection to Luke — who I do think was a good guy and I was happy that my character could facilitate the audience seeing that he’s not a villain just because he’s not Deacon — he treated her really well. I appreciated that the writers had us have this connection but not act on it. Sadie chose to get her life together and honor her friendship with Rayna by not getting together with her ex. Who knows what will happen down the road? I don’t know if I’m coming back. I don’t really know anything. But I know if I did, I’m sure it would be in a capacity with Luke.

TVLINE | Are you at all worried about Deacon’s future?
Listen, I’m a very big Deacon fan.

TVLINE | Who’s not?
Monsters. People who aren’t human. I just love Chip [Esten] so much, too. He’s such a funny, cool person. If they kill [Deacon], I’m not gonna be OK.