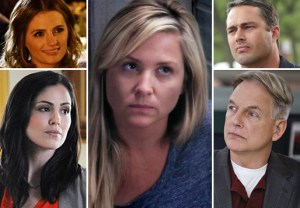 Question: I’m thrilled to see Michelle Borth back on Hawaii Five-0. Please tell me that she is staying. —Sandra
Ausiello: Borth is staying on as Catherine… at least for a little while, in part because next season will open with the “first dance” at Kono and Adam’s wedding. “We’ll miss the actual vows, but we’ll come in on them being introduced as husband and wife,” showrunner Peter M. Lenkov tells TVLine. As for Borth’s status, “We haven’t finalized how long she’ll stay, but she’ll definitely be in some episodes at the beginning of the season,” he shares. “We haven’t figured out exactly where to go, but we’re working on it.”

Question: When will Fear The Walking Dead premiere? —Joanne
Ausiello: AMC hasn’t announced a specific date beyond Summer 2015, which makes me think it probably won’t see the light of day until August. BTW, showrunner Dave Erickson — who earlier this week spilled a half-dozen tantalizing teases about the anticipated spinoff — says the first chaotic days of the zombie outbreak will have a “civil unrest” feel, adding, “Everyone’s trying to deal with the fact that people they know and love are suddenly behaving in [odd] ways, while also trying to process the fact that there are shootings, fires and riots breaking out across the county.” Eventually, a harsh reality [sets in] that “something far more insidious and unnatural” is going on.

Question: Will we ever see  Grey’s Anatomy‘s Arizona get romantically involved with anybody new? –Christina
Ausiello: Interestingly, Jessica Capshaw told us last week that in one draft of the season finale script, “There was definite forward movement happening for Arizona, but it didn’t quite fit” into the larger storyline. That said, there was evidence of “what I hope everyone is excited about, which is peaceful coexistence” for Arizona and Callie, who are “moving toward a place where they can actually broach subjects that are tough for ex-wives.”  But as for ‘Zona herself, Capshaw strongly suspects that in Season 12, “big things will happen for her.”

Question: Maybe I was the only one who watched The Slap, but I enjoyed it. I didn’t see it on the Renewal Scorecard. Was that officially just a one-and-done season, or might it continue? —Jennifer
Ausiello: I’m tempted to slap you upside the head for asking such a boneheaded question, but I will resist said temptation and calmly inform you that The Slap will not be returning for Season 2. (The first part’s funny because the show was about a kid getting walloped in the face! At least I think it was! I never actually watched it!)

Question: I can’t believe I have to wait two weeks before the Outlander season finale. I know someone at TVLine has seen it. Can you tell us anything, pretty please? —Janet
Ausiello: Those who’ve read the book know that a major revelation happens in the last few pages. I can tell you (via Kim Roots) that a) said revelation is in the finale, but b) it doesn’t happen in the same place or in the same way that it does in Diana Gabaldon’s novel.

Question: I’ll get right to the point. Is Mark Harmon leaving NCIS? —BC
Ausiello: He’d be breaching his contract if he walks so… no?

Question: Supergirl intel, please. I’m obsessed with the trailer. —Jonathan
Ausiello: Nashville‘s Laura Benanti, who plays Kara’s Krypton mom Alura Zor-El, acknowledges that she can’t spill the superbeans, but offers this tantalizing bit: “You’ll see me in flashbacks, you’ll see me in hologram and then you’ll see me in one other capacity, which I can’t tell you [about] — but it is the thing that makes me the most excited and is why I wanted to do the show.” BONUS SPOILER: Benanti add that Kara’s Supergirl outfit is based on the long, blue gown Alura wears in the trailer. “I have the same belt that she has and the S — which is our family crest, it actually doesn’t stand for ‘super’ — in the top,” she says, laughing. “It’s very ‘hot Yoda.'”

Question: Please, please, please tell me Andre Braugher isn’t leaving Brooklyn Nine-Nine! I’ve loved him since Homicide: Life on the Street, and I adore his gruff, seemingly cold, but brilliant character on one of my favorite comedies. There’s a Snapple and Smurf doll in it for you if you can answer my question! — Jenny
Ausiello: As reported in our Brooklyn finale post mortem, Braugher is indeed sticking around. Ditto Kyra Sedgwick as Holt’s nemesis, Madeline Wuntch — maybe. According to showrunners Mike Schur and Dan Goor, they would love to bring Sedgwick back for Season 3, if her schedule permits. “She fit in so well,” Schur said. “I’m sure that she’s fending off other shows offering her stuff, but she’s so interesting. She’s such a complex human being.”

Question: Should Person of Interest fans be worrying about the shortened episode count? Is next season it? —Jess
Ausiello: Not necessarily…? At least according to CBS boss Nina Tassler, who weighed in on the show’s future not long after Season 5 got halved. “[Showrunners] Jonah Nolan and Greg Plageman came in and pitched really terrific ideas for the new season. So, we have to see,” she said. “It’s always been a very smart, creative show; we don’t know yet whether it’s going to be the end or not. If it is, we’ll have a great ending.”

Question: Too soon to ask about Arrow Season 4? —Rae
Ausiello: Theoretically, it’s way too soon. But in actuality, maybe not. Because when showrunner Marc Guggenheim told us that they knew at this time last year that Malcolm would wind up as the new Ra’s, we of course had to ask if they could tease the plan for next May’s finale. “The funny thing is I could,” the EP told Matt Mitovich, “because we are in the writers’ room right now working on the plan for Season 4. And though we don’t always start with where we’re going to end, where we’re going to end is an important part of our conversation. And the room today generated, I think, a potential ending that is very, very interesting. But the first step in surprising all of you is surprising us.”

Question: What can we expect from The Vampire Diaries in Season 7? Give me anything! I’m desperate… — James
Ausiello: You can expect a lot more of Mama Salvatore and her band of renegade heretics, and even more surprisingly, you can expect some meaty material for Michael Malarkey’s forgotten character. According to executive producer Caroline Dries, Enzo will find himself caught in the middle of the ensuing war between Mama Salvatore and her sons. “He’s eventually going to have to choose a side,” Dries teases. “In some ways, he feels drawn to Lily; she turned him and she’s the only real family he has. But he’s also friends with Damon, so it’s going to create an interesting dilemma, and whichever side he chooses will have serious ramifications.”

Can you give a clue to what this new mythology will be next season on The Originals? —Klaus
Ausiello: Well, Klaus — if that is your real name — it sounds like the Mikaelson’s biggest mythology-related threat in Season 3 is going to be none other than Ms. Davina Claire, the newly appointed regent of the witches of New Orleans. “The spirits are going to have access to Davina,” executive producer Michael Narducci says. “They’re going to lend her their power and communicate with her about what’s best for the people and witches of New Orleans. That’s who she’ll be an advocate for, and the Mikaelsons, some would argue, are not the best things in the world for the witches. That’s going to put them at odds, assuming there’s no larger threat coming for which they might have to unite against. There are a lot of different ways this could play out.”

Question: Any Chicago Fire Season 4 to tide me over during this long, brutal hiatus? —Tiffany
Ausiello: Severide’s brief flirtation with Med doc April may have flamed out, but the fireman’s love life won’t be cooling off. Quite the opposite, actually. “There’s going to probably be an in-house romance for him,” executive producer Matt Olmstead reveals. “We want to give him something a little more substantial. A real love interest.”

Question: I heard a rumor that Jane the Virgin plans to introduce Rogelio’s ex in Season 2. Any truth? —Gerry
Ausiello: Yes, exec producer Jennie Urman confirms that we’ll meet Ro’s first wife, “who’s a very, very beautiful hoarder and former telenovela star,” adding that the yet-to-be-cast character’s arrival will put “stress and pressure on Ro and Xo.” What are you waiting for? Deposit your casting tips in the comments!

This AAnd That…
♦ I really enjoyed the Mad Men finale, but it still doesn’t hold a candle to last month’s immensely satisfying Justified send-off.
♦ Stana Katic’s new one-year Castle deal has her appearing in all of Season 8’s 22 or 23 episodes. In case you were wondering.
♦ More X-traordinary news: Another X-Files MVP — writer Darin Morgan — is returning for next January’s six-episode revival on Fox. (I’m getting conflicting info about Spotnitz’ role in the revival, which is why his name has been crossed out. Stay tuned as I dig further…)
♦ I hear Showtime’s Twin Peaks continuation will still be nine episodes long, but two of those episodes — likely the premiere and the finale — will clock in at more than one hour apiece. Hence Showtime announcing on Friday that its new deal with David Lynch resulted in the revival being expanded beyond nine hours vs. nine episodes.