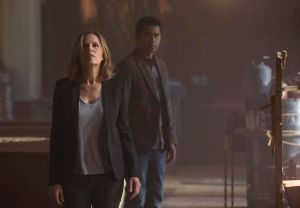 AMC has yet to announce a premiere date for its upcoming Walking Dead spinoff (beyond “Summer 2015”), but we have the next best thing: scoop directly from the show’s boss!

For the first time, Fear The Walking Dead showrunner Dave Erickson is opening up about the anticipated offshoot’s central conceit, distinct tone and “fresher” breed of zombie. Erickson also weighs in on the much-maligned title and the possibility of Rick, Carol & Co. making a cameo in the Los Angeles-set series.

TVLINE | For the record, what’s the spinoff’s basic premise?
We’re covering the period of time when Rick was in his coma, so we’re getting to see things go sideways in a way that he did not. And we’re telling our story through the filter of this highly dysfunctional blended family [led by Gang Related‘s Cliff Curtis and Deadwood‘s Kim Dickens]. It’s about the shark you don’t see. It’s the education of our characters as to what is going on and how the world is unraveling and what is happening to people.

TVLINE | How will it differ tonally from the original series?
It’ll differ in so many ways… [It’s about] the anxiety and anticipation. We don’t go, for lack of a better term, full-zombie. There’s a bit more of a slow-burn to the story. We don’t get to a point where we’re actually in a full-blown apocalypse until much later in the show. [Fellow EP] Robert [Kirkman] wanted to really dwell on what it’s like to [commit] a violent act — especially in our world, because it’s so early, and our walkers are fresher and far more human. It’s [emotionally] difficult to kill them, even when somebody’s coming after you… In terms of emotional tension, when we put one of our characters through a moment where they have to commit some brutality to defend themselves or others, they’ll suffer for it.

TVLINE | I imagine they’re not even sure what’s wrong with them…
Right. They’re ticking off the things that this could be: Is this person on something? Are they mentally ill? Is it a virus? They’re trying to grasp exactly what they’re confronting. The last place any of the characters want to go is to the place where the audience is waiting for them — which is that these people are not alive anymore. And they have to work through it. Eventually, they’ll come to realize what Rick came to realize in the [Walking Dead] pilot: these people are not people anymore.

TVLINE | Will there be any major differences between Fear‘s zombies and Walking Dead‘s zombies? Will yours be faster?
I wish like hell they were faster. [Laughs] When Rick comes out of his coma, four or five weeks in, you’re already dealing with walkers who have decayed and atrophied to a place where they look like monsters. A lot of our work is focusing on [giving the zombies] a corpse-like quality. Blood is no longer flowing, we’re playing with some effects for the eyes… Since we’re not dealing with the level of decay [as many of the zombies on TWD], I do think there’s a possibility for greater strength. So some of those scenes may be more physical. But as far as behavior and movement, that part is going to be the same.

TVLINE | Does the show’s Los Angeles setting preclude any crossovers with the original Walking Dead cast?
Never say never, but there are no plans right now. The geography is an obstacle, and frankly somewhere down the road it will become an even greater obstacle.

TVLINE | Since it’s taking place in the early days of the outbreak, will we get a glimpse of the effort to contain it on a government level?
We will not. One of the things I loved about the original [series], and one of the things we’re going to maintain here, is we’re going to see through the eyes of the family the aftermath of the decisions that were made on the command level. We’ll never tell a story from the CDC’s perspective, or from FEMA’s perspective. It will never be World War Z.

TVLINE | When the title was announced many people — myself included — were hoping it was a joke. What is your honest opinion of the title?
It was important to maintain elements of the original title and have that connection. And we didn’t want to do The Walking Dead: Los Angeles. I think it’s a solid, straight-up title. I also think Fear will become the shorthand.

TVLINE | Will these first six episodes feel like a miniseries?
It’s written as a six-hour movie and that’s the feel we want to have. That said, we’re building to a place of emotional fracture for our characters and getting to a place where we will definitely be setting up the emotional conflicts that we want to either heal or continue to fracture over the course of Season 2. We’ll be ready from an emotional standpoint to launch into the next season, [but[ it’ll also be a satisfying ending.