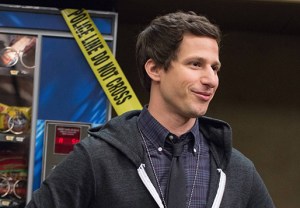 The following post mortem contains spoilers for the Season 2 finale of Brooklyn Nine-Nine.

O Captain, my captain… you got played.

Despite his best efforts to get the upper hand over rival Madeline Wuntch (Kyra Sedgwick) in Sunday’s Brooklyn Nine-Nine season finale, Captain Holt was forced to leave the precinct behind and take a desk job in the NYPD Public Relations Department.

Long story short: After Holt unearthed an incriminating letter that Wuntch once wrote, Wuntch fired back by threatening to make all the 99 cops miserable if Holt showed the letter to anyone— a risk the captain was not willing to take.

But if you’re nervous that Andre Braugher’s fearless leader is off the show for good, we can put those worries to rest. “You’ll see him in the first episode [of Season 3]. You just won’t see him in the precinct,” co-showrunner Mike Schur tells TVLine. “The thing about those moves is you have to commit to them. They have to matter. You can’t just come back and go, ‘I change my mind!’ There will be some amount of time where he’s in a different world than the world of the precinct.”

That’s not to say Schur and co-showrunner Dan Goor actually know how Holt’s new job will play out. As they begin to write the first scripts of Season 3, Goor says, “Our philosophy has always been to write ourselves into the hardest corner to get out of, and then spend the off-season trying to figure out what to do. That seemed like an exciting corner to put ourselves in.”

The same brand of logic was applied to Jake and Amy’s undercover assignment, which led to not one, not two, but three long-awaited kisses — the last of which happened as “Jake and Amy,” not “Johnny and Dora.” 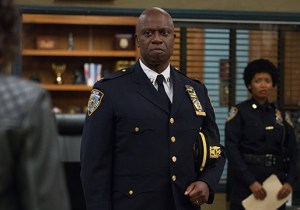 “It’s something we never wanted to rush,” Goor says of the pair’s milestone. “As we saw the season unfold, it felt more and more natural to head them in that direction. We just kept our eyes open and felt this would be an exciting thing to do, and that it wouldn’t feel pushed.”

Still, Andy Samberg and Melissa Fumero recognize the potential for their characters to get cold feet when the Fox comedy returns. “They’re partners and they’re good friends, and their desks are next to each other,” notes Fumero. “That’s really intimidating for Amy if it doesn’t work out, which is, of course, a possibility. That’s definitely going to be a major conflict.”

Adds Samberg: “I would assume [Jake] thinks it’s going to continue in some way, shape or form. But the way they’ve been, it might be immediately, ‘Oh, this was a mistake.’ Or it’ll be like, ‘It’s on.'”

* Even though Boyle/Diaz ‘shippers might read into the sweet birthday surprise that Charles planned for Rosa, Joe Lo Truglio swears there were no romantic undertones in his character’s gift. “In this case, he’s being a good friend,” he explains. “I think, as with Rosa, Charles has feelings that he doesn’t even know or won’t admit. I want to see Rosa and Charles develop a very good friendship first. And then from there, we can see what happens.”

* Now that Gina has chosen to follow Holt to the world of NYPD public relations (“She really is ride-or-die for Captain Holt,” Chelsea Peretti says), the actress would like to explore Gina’s love life in Season 3 — even if it’s a bit unorthodox. “Once, I was fired from an internship because I basically treated it like it was my home office, and I set up shop way too hard,” Peretti recalls with a laugh. “Something like that would be funny, like [Gina] gets a little too comfortable having her lover in the office.”

* Not even Schur and Goor know who will be standing on the other side of that elevator door when Season 3 begins, but they have plenty of actors in mind to play the precinct’s new captain. “We literally sent an e-mail to our casting director, saying, ‘Check on the following availabilities,’ and the list was four pages long,” Schur says. As for Samberg, he had only one (tongue-in-cheek) casting suggestion: “I said Bill Clinton or I walk. And they said to enjoy my life.”

Brooklyn Nine-Nine fans, what did you think of the eventful finale? Grade the episode in our poll below, then hit the comments to back up your choice.