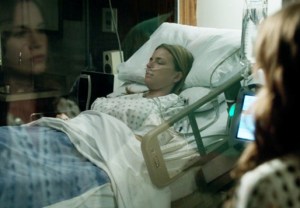 Despite the many storylines wrapped during last week’s Revenge series finale, viewers were left with one intentionally ambiguous question: Did Emily receive Victoria’s heart?

“It’s a fun question for the audience to toy with: If it did happen, what does that mean?” Revenge showrunner Sunil Nayar told TVLine after the finale aired. “It’s a bizarrely theoretical cliffhanger, which I hope inspires conversation. I like the debate of it.”

Well, unfortunately for Nayar, it appears the debate has reached an early conclusion. Star Emily VanCamp on Sunday night used Twitter to put all heart-related rumors to rest:

Emily did not receive Victorias heart!! The idea was that it was a recurring nightmare that would haunt her forever. #Truth #Revenge

Of course, VanCamp isn’t the only Revenge star who’s attempted to set the record straight since the finale aired. In fact, Madeleine Stowe gave TVLine the inside scoop on the big twist, including how it changed from script to screen:

“When we did the table read, it absolutely happened,” Stowe told us. “But they wanted to go for a little more poetry and have it be in her psyche so that you saw she was troubled by this. They’d never tell a transplant recipient who gave the heart unless both sides agreed to it. In the original draft, it absolutely happened.”

How do you feel, Revenge fans? Are you anti-transplant, like VanCamp? Or would you rather it be ambiguous, like Nayar? And what could have possibly triggered this truth bomb, a full week later? Drop a comment with your thoughts below.