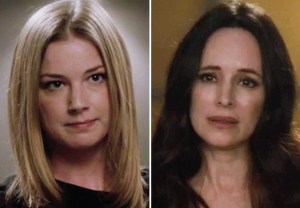 After four seasons, 88 episodes and more deaths — both real and faked — than you could tally with even the inkiest of red Sharpies, ABC’s Revenge reached its conclusion Sunday. And just as the finale’s ominous title (“Two Graves”) suggested, not every Hamptonite survived the fateful hour.

Let’s cut to the chase: The “two graves” in question ended up going to Victoria and David. (No, for real this time. They’re both actually dead. Forever.) After being shot by David at LeMarchal HQ, Vicky had just enough energy to snatch Amanda’s gun and fire back at her.

Fortunately, Amanda survived her final encounter with the Wicked Witch of Westhampton — and she made good use of her new lease on life, after a bit of a time jump, by becoming Mrs. Jack Porter! And they even got a new Sammy! (Pardon my excitement, but some announcements demand exclamation points.)

Of course, there’s no way Revenge could leave us without at least one unanswered question: Was Amanda given Victoria’s heart in order to survive? A flashback scene found Charlotte insisting that the doctors not tell Amanda “who” provided the vital organ, but the revelation was followed by Amanda waking up — rather suddenly — on Jack’s boat. So… was it all a dream?

Let’s hit the “rewind” button to discuss what we know definitely wasn’t a dream: 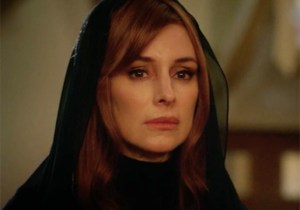 DING, DONG! | In what might be the darkest Mother’s Day twist of all time, Victoria revealed that her mom — or as she affectionally calls her “a cruel, loathsome bitch who deserves to burn in hell” — was the body found in the Grayson Manor wreckage. Why would she do that to her own flesh and blood, you ask? Well, it might have something to do with the fact that she tricked Victoria into sleeping with her own father, which was almost as big a surprise as Victoria attending her own funeral… in literally no disguise whatsoever. Seriously, look at that get-up! Like, not even a pair of sunglasses? Come on, Vicky.

NOLAN’S OPEN ENDING | I figured White Gold would be taken down in the finale, but I never expected Nolan to be the man of action. I guess I forgot, as Nolan mentioned, that he’d been trained by one hell of a sensei. And although he didn’t find true happiness of his own in the finale, he did receive a surprise visit in the episode’s final moments — a potential investigative opportunity, courtesy (apparently) of Amanda:

This prompted some fans on Twitter to question whether Nolan might be getting his own continuation series. (Spoiler alert: He’s not. Also, ABC passed on Kingmakers., which was believed by many to be a faux-spinoff.)

MR. AMANDA CLARKE | The finale was a mixed bag for Jack; sure, he finally — and I mean finally!!! — hooked up with Amanda, but after going out to pick up breakfast, he returned to find none other than White Gold waiting for him (a cautionary tale for ordering food online, if ever there was one.) Fortunately, he survived his encounter with Courtney Love, and even managed to snag David’s blessing to marry his daughter! (I’ll refrain from asking how Jack and Emily went from not-even-dating to suddenly getting engaged, but only because I’ve been waiting so damn long for this to happen.) 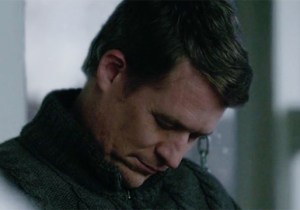 R.I.PAPA | As I mentioned earlier, David eventually joined (the original) Sammy in Revenge heaven, but not before assuring Amanda that his life’s mission was “complete” and that he loved her “infinity times…” well, that’s all he managed to get out before he croaked. Fortunately, sources reveal exclusively to TVLine that David would have finished that sentence with “…infinity.”

Revenge fans, your thoughts on the sudser’s last hurrah? Grade the finale below, then drop a comment with any of your lingering questions. (We’ll be speaking with Madeleine Stowe and showrunner Sunil Nayar on Monday!)