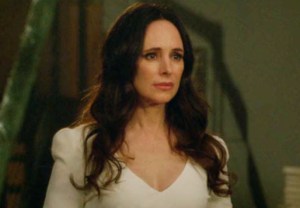 Let’s start by addressing the elephant in the room: Madeline Stowe knows she was a bit misleading when she told reporters, including TVLine, that Victoria died in the explosion at Grayson Manor.

“I knew that I wasn’t coming back to the show [after Season 4],” the Revenge star says. “So I was telling you the truth, it just wasn’t in that moment. Sorry!”

Below, the oh-so-apologetic Stowe discusses last night’s series finale twists, including the identity of Victoria’s father, whether or not Amanda really got her heart and, of course, that incredible construction worker disguise.

TVLINE | This episode wasn’t initially planned as the series finale, but did it feel like the end when you were filming it?
I don’t think anyone knew. As I said, I knew I was leaving the show since the fall, so that’s what it was for me. Victoria’s state of mind had really deteriorated; she was ready to go. I tried to find some grace for her, which was acceptance. Victoria’s mother’s crimes really took such a toll on her, as we saw in that last reveal, and that’s why she burned down the house. She was so devalued as a child that she wanted to use her mother in the same way.

TVLINE | The last time we spoke, you told me you pitched Victoria’s death once per season. Is this, ultimately, how you think Victoria wanted to go out?
Look, Victoria would have loved to have been happy, and I kept rooting for that. I love her so much, but that’s just something that was going to be denied over and over again. In that sense, she’s always been a doomed person. She responded to the world from a self-protective instinct because she’d been so violated. Bad choices were made all along, but I’m also not sure she had many choices; when your husband tells you he’s in league with terrorists and they’re going to take your son from you, how do you respond to that? Certainly what she did to Emily was not good.

TVLINE | That seems to be a running theme on this show: What defines good behavior?
There was a scenario being heavily discussed where David Clarke was, perhaps, a mastermind — that he’d actually brought these people in and was not a good guy. This was potentially going to be a revelation to Emily that would completely rock her. Victoria was not quite the monster you thought she was, but you so believed in this girl’s credibility and how much she loved her father. They were going back and forth about that, but I believe ABC felt it would have been a betrayal of their audience to go down that road. It would have been interesting. It’s a show you can see from many different angles, and I don’t know which one’s right and wrong.

TVLINE | Let’s talk about Emily possibly getting Victoria’s heart. Your thoughts on that twist?
I’d like to think Victoria always had a mighty heart, but nobody knew it. So now she’s got her enemy’s heart — which might not be so bad. When we did the table read, it absolutely happened. But they wanted to go for a little more poetry and have it be in her psyche so that you saw she was troubled by this. They’d never tell a transplant recipient who gave the heart unless both sides agreed to it. In the original draft, it absolutely happened. 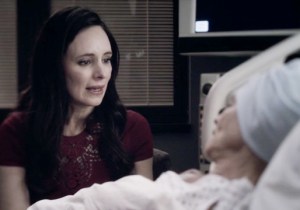 TVLINE | The revelation from Victoria’s mother also threw me for a loop. Did Victoria really sleep with her father?
She didn’t sleep with her father; she was abused by him. People so believe in Victoria’s wickedness that they would actually think she’d be a willing participant when a guy comes into her bedroom and abuses her, which happens to women all over the world. She didn’t know [he was her father] and that’s the level of psychological damage that Marion inflicted on her. She twisted everything to blame Victoria.

TVLINE | So… Do we know who Victoria’s father is, or was?
Victoria never knew, so the revelation is that once Victoria got out of serving the time her mother should have been serving, the mother started a new life, which was touched on in Season 2. Her mother had already started a new life with a new boyfriend; what Victoria didn’t know was that this was her father re-entering her life. In Season 2, the mother says, “I should have done what your father said and just aborted you.” This is dark, but it does happen in life. 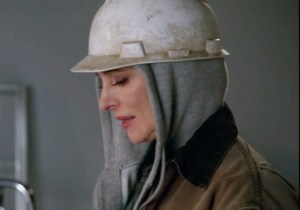 TVLINE | Let’s end this on a positive note: I loved Victoria’s two disguises last night, especially the construction worker.
Oh my God, I loved that. All I could fixate on last night, with my daughter and my husband, was my lipstick. I forgot to take it off! So there she was in full eye makeup and full lipstick; I thought, “This is hilarious.” Why not? It was one of those moments where you cringe as an actor.

Revenge fans, your thoughts on how Victoria’s story drew to a close? Drop ’em in a comment below.