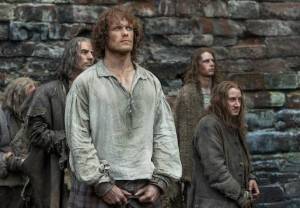 I have a feeling that the membership of PETJAMMF — that is, People for the Ethical Treatment of James Alexander Malcolm MacKenzie Fraser — will have grown significantly by the end of this week’s Outlander.

How could it not, especially when Mr. Claire Beauchamp is nearly hanged, only to be saved by evil incarnate (aka Black Jack Randall), offered a terrible proposition and forced to relinquish the love of his life and then some in exchange for her safety?

It’s a rough hour, and I wish I could say it ends on a happy note, but most of us know that isna likely. So let’s all quaff a wee dram of Scottish courage and review what takes place in “Wentworth Prison.”

WENTWORTH PRISON BLUES | Jamie’s absence in the previous episode is addressed right away, as we pick up with Lord Broch Tuarach and MacQuarrie waiting in line to be hanged in a Wentworth Prison courtyard. One by one, the men ahead of them are called by name to ascend a platform and don the noose; Jamie and MacQuarrie chat about it casually as they move forward in line, but you can tell the situation is getting to both of them.

Eventually, it’s MacQuarrie’s turn, and he is not blessed with a quick, clean death. With the Watch leader still jerking on his rope, Jamie makes a decision: Sugar, he’s going down swinging. He wraps the chain binding his wrists around the nearest soldier, but it’s to no avail; he still winds up with the snare around his neck. At the very last moment, a man calls, “Stop the executions!” Yay! Jamie is saved! Wait a minute, it’s Randall. Boo! Jamie is screwed! Black Jack orders Jamie chained up in one of the dungeon cells, and the stymied redhead is led away.

VISITING HOURS | Meanwhile, Claire visits the prison and pretends to be a distant acquaintance of Jamie’s looking into his welfare as part of her “Christian duty.” She barely keeps it together (oh honey) when the warden tells her Jamie is still alive but she can’t see him; I nearly lose my stuff when he gives her Jamie’s personal affects and the little wooden snake is so pathetically there on top of the pile.

After a quick stress-puke outside the prison, Claire can barely stand. Murtagh picks her up, grabs the box and gets them out of there. 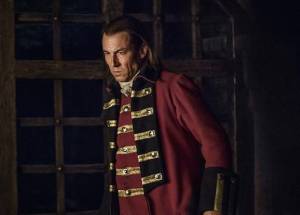 THE BEGINNING OF THE END | I have never loved Rupert and Angus more than I do in the scene that follows, when what appears to be their drunken disregard for Claire’s plight reveals itself as a clever ruse to gain vital info from the jail employees with whom they’re gambling. (Their self-congratulating is funny, too.) Armed with intel about the warden’s nightly schedule — AKA when Claire and Murtagh can bluff their way back into his empty office and hopefully find the key to where Jamie’s being held — Mrs. Fraser and her partner in crime return to the prison.

But Claire, you’re gonna want to hustle. Down in the dungeon, as Randall and a giant, terrifying lout named Marley enter Jamie’s cell, I and everyone who’s read Diana Gabaldon’s novel have the same chilling thought: Oh God, it’s starting. Black Jack calmly flourishes the petition of complaint Jamie filed against him, then burns it while Jamie’s hopes of exoneration also go up in smoke.

Then things get really weird, really fast. Randall is shaking a little, sweating and talking about Jamie’s junk, saying things like he wants the Scot to admit “that you escaped Fort William but you did not escape me.” Jamie’s face, body language and affect throughout the scene communicate two thoughts: 1) “The hell?!” and 2) “Nope.” But Randall doesn’t seem to care. The captain eventually gets around to his big ask: If Jamie gives him the use of his body (ugh, even typing that phrase makes my skin crawl), “I will give you the death you deserve.” (Side note: How screwed do you have to be for this to be an attractive offer?)

Jamie’s refusal — “I won’t surrender to you, or any man” — merely stokes Randall’s desire to tame his prisoner. (Snap poll, Outlanders. What’s creepier: The matter-of-fact way Black Jack talks about how any man can be broken, or his insistence on seeing the scars his handiwork left on Jamie’s back?) When he draws close, Jamie is like “Enough of this ish,” and starts violently choking Randall. Marley rushes in with a mallet, and when Jamie loses that battle, a recovered Black Jack forces Jamie to lay his hand flat on the table, takes the mallet from his accomplice, then starts making a pancake of Jamie’s fingers. Don’t worry; the anguished screams emanating from Sam Heughan will only bother you if you have a heart, soul and/or fingers.

BLACK JACK UNMASKED | Let’s try to keep positive, kids, because there’s a lot of darkness ahead: At least Jamie’s cries communicate his general location to Claire, who has managed to slip down into the bowels of the building, find a door to the outside and leave it unlocked. (That’ll prove important later.) As she draws closer, Randall is starting to lose his cool with his captive. “Why do you force me to treat you in such an abominable way?” he asks.

It should be noted that Jamie is in no shape for any kind of conversation at the moment, doubled in half with pain, bleeding, chained and generally hating life. But don’t worry, everything is about to get even more disturbing. Once he establishes that his prisoner is conscious, Black Jack grabs Jamie’s uninjured paw and puts it between his legs. “I could take you right now,” Randall threatens, and over in the corner, even Marley the big, dumb attack dog knows that this is messed up.

After the pair leave, Claire enters Jamie’s cell and finds him lying on the floor, nearly insensate. “Dinna fash, Sassenach,” he slurs. No, Sassenach. FASH. FASH A LOT. She’s trying to unlock his leg irons when Randall and Marley return. Many terrible things happen in rapid succession, so I’ll shorthand it: Randall sniffs Claire, Jamie rallies long enough to wound Marley in the throat, then Randall nearly chokes Claire to death and the only reason he stops is that Jamie gives him what he wants by saying, “Have me.” 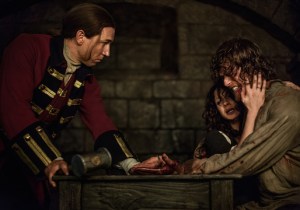 NAILED IT! | You’d think that would be bad enough, but Jack wants proof that Jamie won’t change his mind as soon as Claire is safe. So as a test of his word, the captain has Jamie offer up his mangled hand… which Jack affixes to the table. (Note to Ron Moore: When the fans say they want to nail Jamie, this is not what they mean.) Good God, it’s horrible to watch, with Claire clinging to her husband and both of them sobbing, then Randall forcing Jamie to kiss him while she watches. Then Jamie orders her gone, tells her he loves her, they kiss and Randall forcefully escorts her out of the cell.

Though Claire momentarily freaks Jack out by telling him she is a witch who can foretell the date of his death, he gets over it by pushing her through a hole in the floor. She winds up in the pit where they throw the corpses, though she makes her way back to her men.

Inside, Randall hasn’t let the momentary pause put a damper on his insane party. One of the more disturbing visuals involves Randall admiring his “masterpiece” — Jamie’s ruined back — up close. “Don’t lick it, don’t lick it,” I whisper as his face draws ever closer to the scars… and then he licks it. Ick, Outlander. Jamie stares straight ahead, crying, and I wish I could tell you this is as bad as it’s going to get before the end of the season, but I dinna like to lie.

GET A MOOOOOVE ON | Amazon of awesome that she is, Claire takes a deep swig off of a wine bottle then says they have to go back inside. But MacRannoch, a friend of Clan MacKenzie who’s letting them use his home as a temporary shelter, says he can’t risk lending any of his men to the rescue effort. Claire tries to buy his participation with the pearls Jamie gave her on their wedding night; it turns out they were originally from MacRannoch. “Your husband is Ellen MacKenzie’s son?” he asks, interest piqued. Just then, there’s some noise outside, and we learn that MacRannoch has a herd of cows in his front yard. “Cattle, you say?” all the book readers murmur as Murtagh looks them over with an interested eye and murmurs, “I know how we can save young Jamie.”

Now it’s your turn. What did you think of the episode? How will you fill the two weeks until the May 30 season finale? Sound off in the comments!