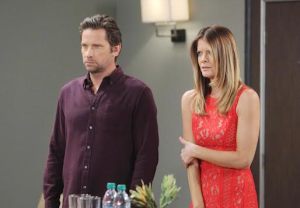 When One Life to Live strayed from the soap script in 2002 and went live for a week’s worth of episodes, Michelle Stafford — who at the time played Phyllis Newman on CBS’ The Young and the Restless — got very jealous, very quickly.

“I remember going, ‘Oh my God,” the actress tells TVLine, “I want to do that here.'”

RELATED General Hospital‘s Anthony Geary to Exit: ‘I Don’t Want to Die on the GH Set’

Fast-forward more than a decade, and Stafford is finally getting her wish. As part of its ongoing 52nd anniversary celebration, ABC’s General Hospital — thanks to the musical-chairs world of daytime drama, Stafford is now a series regular on that soap — will broadcast live shows today and Monday (check local listings).

Like many of her co-stars, Stafford has experience in live theater; she says she intends to pull heavily from that part of her background when the cameras start rolling Friday.

Of course, the vagaries of live theater have made her aware she might have to bail out — or be bailed out by — a scene partner, which is why she’s stoked to be sharing scenes with castmate Roger Howarth, who plays somewhat-insane-artist Franco to her crazy-yet-compelling Nina.

“I’m good with saving somebody in the scene,” Stafford offers. “And Roger is really good with it, because a couple of times… he’s saved me.”

Though Stafford was forbidden to give much scoop about the without-a-net episodes, here’s what we could gather. A wedding will take place — maybe the recently engaged Brad and Lucas? “It’s not what you would expect, and I don’t think it’s who you would expect, either,” she says.

It’s almost a given that Nina and Franco will share a scene or two during the big experiment, but Staffford says she also acts opposite another character. “I’m not allowed to say. But… it’s random. And it’s really a turn that I did not expect.”

Furthermore, “A big secret comes out” — likely related to Jake really being the much-missed Jason, though that’s just our guess. And finally, “somebody gets to get revenge on somebody, which makes them feel very good, and then somebody has a dire situation.”

In other words, it’s just another day in Port Charles, N.Y. And if you catch Stafford stammering a line or tripping over a prop, don’t be so sure it’s a mistake.

“I was thinking of pretending like I flubbed, just so the audience goes, ‘Did she? Or did she not?’,” the actress says, laughing. “And, of course, I’m going to have my friends watch and [I’ll] be like, ‘When I touch my nose in the second scene, that’s when I’m saying hi to you.'”