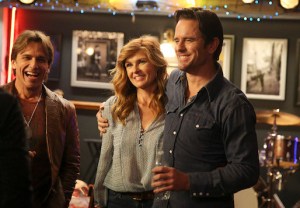 “Every time I’ve looked in my future, you’ve always been in it. And I don’t know what I’m gonna do without you.”

It’s hard to hear Rayna utter those words in this week’s Nashville, partly due to the gut-wrenching nature of her grief and partly due to the fact that she’s sobbing so hard the sentence ends in a pitch only hyenas can hear.

But let’s keep in mind that the past few years have seen our girl end a marriage, hook up with a hipster, launch a record label, battle her sulky teen daughter on multiple occasions, walk out on a wedding to Luke “I’ll endorse roach bait if the price is right” Wheeler and reunite with the dying love of her life. Heavens to Patsy Cline, hasn’t she earned the right to a few black mascara tears of her own?

The moment is a very sad one in an hour that doesn’t dole out the hope until its final moments. And, as usual, Connie Britton and Charles Esten kill it. (Oops. Sorry, Deacon. Figure of speech.) Without further ado, let’s review what happens in “Is the Better Part Over.”

RAYNA’S BAD DAY | Someone leaked the news of Deacon’s illness, and everyone around town is talking about him like he’s already gone. If that weren’t bad enough, Beverly rips up Rayna’s $1 million check and express-mails it to Highway 65 just in time to make Rayna not care one scooch about a meeting with Juliette. She’s supposed to be reprimanding Ms. Barnes for her series of illegal rooftop concerts — and the fines they’ve accrued — but Ray gives absolutely zero figs about that right now. She mumbles something about not being able to deal, then goes home to play her and Deacon’s old recordings and cry. (Side note: I might’ve liked to see Rayna mention the illness to Juliette before she took off. No matter how insane Ju is acting right now, Ray gets that she and Deacon have a friendship, right? It might’ve deflated Juliette’s bitchery in an instant.)

Deke finds her there and tries to buck her up, towing the positive line, but can’t you see it won’t work, Deacon? Even her hair is sad right now. She confesses that she was really lobbying Beverly when she told him she was in New York, and he pulls her to him, and pretty soon she’s sobbing that she can’t envision her life without him. Then Deacon’s face is crumpling like a shirt pulled from the bottom of the hamper, he and Rayna cling to each other, and things get soggy quickly.

Deacon is so bummed, he calls Scarlett and asks her and Deacon to perform at The Bluebird that night in his stead. But he eventually changes his mind, and he and Rayna wind up taking the stage and performing one of their old, sweet, quiet ballads called “Surrender.” Afterward, they hold hands and kiss and celebrate some good news: Scarlett and Gunnar have quit bickering long enough to accept Highway 65’s insanely good record deal. (And in case you’re wondering, here’s your two-second recap of Gunnar and Scarlett’s drama this week: SHUT UP AND BONE ALREADY, would you? Oh, and Kiley and Gunnar kiss.)

But wait, who’s that who just walked into The Bluebird? It’s Deacon’s terrible sister/Scarlett’s atrocious mom Beverly. “I wanna do it. I want to help you live,” she tells Deacon, who wraps her in a huge hug while Bev throws some oddly placed bitchface at Rayna over her brother’s shoulder. (Side note: I didn’t imagine that, did I?)

A DIAPER DOWNER | Juliette’s so pumped about the success of her rogue concert series, she invites a willing Avery to join the Mile High Club in her private jet…. while Emily, Glenn and Cadence are a flimsy, faux-wood-paneled wall away. Nice. After the aborted meeting with Rayna, Juliette promises Bucky that she’ll deliver her new album in two days — then lies and tells Avery that Rayna demanded that she finish the tracks by that deadline.

They agree that Avery will go to The Bluebird to support Deacon while Ju stays home, watches the baby and works on her music. Except a manic Ju basically ignores Cadence, calls Emily and skips out to the studio the first chance she gets. Em’s frantic call alerts Avery to the problem, so he summons Glenn and Ju’s OB-GYN for an intervention. (Side note: Hey, baby doc, we get it. You’re the hoohah doctor to the stars. You’re a big deal. You don’t have to wear a leather jacket.)

As you might guess, Ju is less than receptive to the meeting, particularly when Avery notes that he’s never heard her say Cadence’s name. (Sniff.) She takes off, and things are very bad in Casa Barkley-Barnes.

R&R: RISK & RECRIMINATION | No sooner are Will and Kevin back from vacation than Will’s dad makes a surprise appearance at one of his son’s performances. Will is initially angry but eventually softens when Papa Lexington — who is proud of his successful, seemingly straight son — says he loves him. Kevin, though, isn’t down with the family reunion. “We wrote a song about how he threw you away like trash,” the songwriter argues, earning himself an empty bed for the evening. Sorry to break the news, boys, but you’ve got far worse things coming: Luke’s manager is contacted by a tabloid reporter who has photos from Kevin and Will’s vacation and is going to run a story outing Will. Does that reporter work for the Abercrombie & Fitch catalog? Those photos are so shirtless and casually erotic, Bruce Weber could’ve shot them.

RELATED May Finales Calendar: Find Out What’s Ending When?

ACT NOW, THINK LATER | Layla thinks her extreme inebriation at Jade’s party led to the tweet that got her dropped from Ms. St. John’s tour, and Jeff doesn’t tell her that he was the missive’s actual author. Instead, he eggs her into picking a Twitter fight with Jade, which leads to 1 million followers and attention from the press (as well as irritation from Highway 65). Buoyed by that success, he hands her a contract to formally make him her manager. “Oh, cool. I’ll just run this by a lawyer and make sure that I’m not getting completely hosed,” she says. Ha ha just kidding she totally just grabs it and signs it without reading past the part that says the arrangement will last for her entire lifetime. Oy.

Speaking of people I want to dip in honey and roll in fire ants, Teddy agrees to wear a wire for the Feds and meet with a dirty state senator in order to escape prison time. The senator brings up Tandy’s name. Not good.