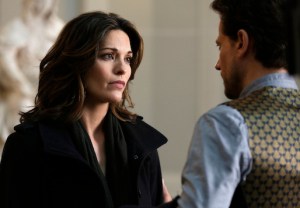 Let’s get one thing out of the way straight off: Forever‘s Ioan Gruffudd isn’t in love with the idea of Alana de la Garza‘s Jo figuring out what’s really going downstairs at the antiques shop.

“I shudder to think of it at the moment,” Gruffudd said, laughing as he considered the notion of his character’s immortality becoming public. “The beauty of it is, the audience knows the secret and nobody else does, apart from Abe.” (And, of course, Adam.) “I love the dynamic and the tension that’s always in the air.”

PHOTOS May Sweeps/Finale Preview: 100+ Spoilers and Exclusive Pics From Your Favorite Shows, Including Forever

So he must adore Tuesday’s season finale (ABC, 10/9c), which finds Jo growing ever more suspicious of the eccentric Dr. Henry Morgan — and increasingly frustrated with his flimsy explanations and disappearing acts. We won’t tell you whether or not the good detective gets close to Henry’s truth during the hour; either way, you won’t want to miss the final few moments of the episode.

When TVLine spoke with Gruffudd a while back, he clarified that “I think it would be amazing if all the while Jo knew something,” citing an idea he and de la Garza have kicked around on set: “Wouldn’t it be great if Henry came ’round to Jo’s apartment, and maybe they were on the cusp of starting something romantic, and then Henry walks into… a whole room dedicated to profiling [him]?” Gruffud mused, laughing as he envisioned “photos, maps” covering the walls. “Alana came up with that.”

For her part, de la Garza said she thinks the series — should it be renewed for a second season — “definitely could” work if Jo became privy to Henry’s unkillable nature.

“The relationship is based so strongly on their friendship,” she added. “She’d probably feel a little betrayed, because… ‘I trust you with my life and you didn’t tell me?’ But in the same way that Abe knows, I think Jo can know, as well.”

She added that in the wake of Jo’s husband’s death, “She can probably handle almost anything. After that, having a guy that doesn’t actually pass away would be OK by her.”