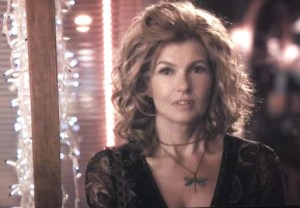 A quick user’s guide to this week’s Nashville:

1. Keep your thumb hovered over your remote’s rewind button
2. The first time you view the various flashbacks to Deacon’s early years, including the epic moment when he and Ms. Rayna Jaymes first lock eyes, focus on nothing but their hair. Their giant, never-met-a-tease-comb-it-didn’t-like hair. (Don’t worry; this will be your first inclination, anyway.)
3. Press rewind.
4. Pay less attention to the ‘dos and more attention to the CGI work that de-ages Charles Esten and Connie Britton. It’s mesmerizing. (Again, this will happen naturally.)
5. Press rewind.
6. Now, with all of that out of the way, focus on the sentiment conveyed in the scenes — but don’t worry if you have to tap that button a few more times, so distracted are you by the exquisite Delia’s-ness of mid-’90s Rayna.

PHOTOS May Sweeps/Finale Preview: 100+ Spoilers and Exclusive Pics From Your Favorite Shows, Including Nashville

Watching our two favorites meet brings up some important questions. Chief among them: Would young Mr. Claybourne and his redheaded soulmate still have set off on their decades-long love affair if they knew it would involve tears, arguments, tears, break-ups, tears, fudged paternity, yawn-worthy placeholders and unfortunate tank-top-vest combos?

While you’re pondering that, feel free to muse about whether Juliette’s new-mom flailing is a sign of something more serious, what Teddy could possibly offer the feds in exchange for his freedom, whether Gunnar and Scarlett should really be in a band together if they can’t make it through an episode without arguing and where in the name of the International Male catalog Will has disappeared to?

HELICOPTER MOM | Juliette thinks Avery is mad when he shows up at band practice with Cadence in her car seat, but he reassures his wife/bandmate — as he hands the baby off to Emily like she’s a pile of dry cleaning — that all he wants to do is help her find a balance. Their moment of marital equilibrium is broken by Glenn saying “We’ve got a problem.” (Side note: If Bucky and Glenn had a dollar for every time they had to utter that line, they’d be able to start their own damn label.)

The problem at hand: No promoter will back a Juliette tour, given that she’s been out of the game for a while and that her shows weren’t selling out even before she had the baby. Bucky counsels a gradual approach to rebuilding her brand, but Ju’s never been the patient type. So pretty soon, she’s saying things like, “Glenn, I need a helicopter.” 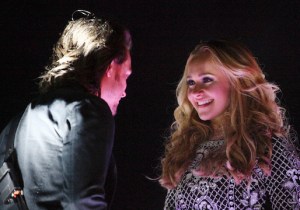 No, Juliette’s not launching an air assault on the Highway 65 offices. (Though I have no doubt she could do so successfully.) She’s putting on a surprise concert on the H65 rooftop, and it’s a hit. Juliette/Hayden looks amazing, the song is great and kicky, and a giant crowd gathers to watch Ms. Barnes’ comeback. Ju is so juiced up afterward, she demands elevator nookie of her willing husband, then proceeds to get on him like me on a cake pop when I have a free pastry coupon at Starbucks. Later, at home, Avery is jazzed when Cadence wakes up for her evening feeding. Juliette looks way less excited about the whole deal.

RELATED Quotes of the Week: Zingers From Nashville, SNL, NCIS and More

A SIS DIS | Rayna tells Deacon she’s heading to New York for a business meeting, but she’s actually traveling to Natchez, Miss. She’s there to lobby his sister, Beverly, to donate part of her liver so he’ll live. “You know he’s got way too much pride to beg. But I don’t,” Rayna says frankly. “Please, please save his life.”

Beverly continues to be the absolute worst by refusing to comply. She fixates on how Rayna “stole” her career by luring Deacon away on tour — a moment we see via flashback. We also see the aforementioned first time Rayna and Deke notice each other, which takes place when she wanders into The Bluebird while he and Beverly are on stage. (Side note: I’m pretty sure I owned that dragonfly necklace, or one very similar to it, in my 20s. Remember how, for a while, everything was covered in dragonflies and/or glitter?)

The only thing these flashbacks prove, aside from the fact that a weathered Deacon is a far sexier Deacon, is that Beverly has been a horrible piece of horribleness for-freaking-ever. The indefatigable Ms. Jaymes sticks around all night, even watching Bev sing (rather well) at a local bar, and compliments her afterward. But Beverly and her stupid peekaboo-shoulder shirt huff off in anger, so Rayna eventually brings the battle down to Bev’s trashy level: She drops a $1 million check in the (for once) speechless shrew’s hands, effectively buying Deacon a liver… if Beverly complies. 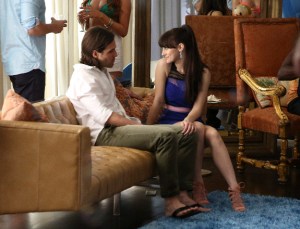 PARTY FOUL | Jade and Luke are over. Reason: He doesn’t love the her big spectacle of a life (but I secretly think he’s bummed to find out her Los Angeles mansion has such an obvious greenscreen behind it. That thing is Castle levels of rough, y’all.) Jeff and Layla are… unclear. She makes him attend a big party at Jade’s place, then drinks too much and makes out with a ridiculous dude named Sully who has lady hair. When Jeff angrily wonders what she’s doing, Layla slurs that being seen as Sully’s saliva receptacle will be good for her image — an argument that might hold more sway if both of her eyeballs could focus on Jeff at the same time. When she passes out in Jade’s front yard, Jeff tweets a photo of Layla, Lady Hair and Jade from earlier that evening — that Jade had explicitly asked Layla to keep to herself — from Ms. Grant’s account. (Side note: I very much enjoyed when Luke and Jeff did their best Statler and Waldorf impressions while grumbling about being the oldest guys at Jade’s bash.)

RASH DECISIONS | Deacon walks in on Maddie and Colt putting their clothes on, prompting my favorite line of the night from Deke: “You need to run,” he tells the boy, who indeed skedaddles away from his girlfriend’s angry dad. “You need to run away from me right now.” (Ha!) When Juliette happens to stop by, she helps a freaking Deacon by sussing out that Colt’s stallion might’ve gotten a rub-down, but he never actually left the stable: In other words, the teens didn’t have sex. The Juliette-Maddie scene is really lovely — I’ve liked that odd friendship since the beginning of last season — and it goes a long way to helping Deacon and Maddie not be super weird around each other later in the episode.

Meanwhile, Maddie’s other dad, Teddy, fields a call from Ol’ Leopard Panties: She’s still in Nashville, she was wearing a wire, and he’s in a buttload of trouble because the feds are coming for him. (Side note: And yet, it still takes them until the end of the episode to make contact.) Teddy buys both of his kids nice Tiffany necklaces (to remember him by) and preps to go on the lam — but an old friend who works at the U.S. Attorney’s office shows up and says he can help Mr. Mayor out of his jam. We don’t know yet what he wants in return, but you just know it’s not good. And because it’s a spectacularly bad decision that will eventually get Teddy in even deeper trouble, odds are that he’ll be cool with it.

KILEY DROPS ANOTHER BOMB | Kiley shows up at Gunnar’s, looking for Micah. Gunny is angry at her for a lot of very understandable reasons, but then she tells him that Jason raped her one night when they were all younger and drunk, and that changes things. In her defense, she claims she never knew for certain that Michal wasn’t Gunnar’s, and I think I believe her.

Scarlett tries to help but winds up getting into a row with her bandmate, who finally admits that he doesn’t like Caleb and who mocks Scarlett for the fancy dress she wears to one of Hot Doctor’s work functions. You listen to me, Gunnar: For once, Scarlett is wearing something that can’t double as a doily. LAY OFF. So Scar winds up at Caleb’s place for the evening, while Gunnar listens while Kiley tells him she “really did love” him. Great.

Now it’s your turn. What did you think of the episode? (Notting Hill as the best romcom of all time? Please.) Sound off in the comments?