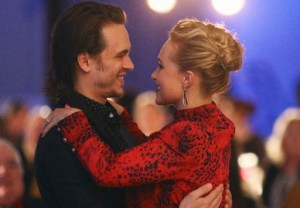 Nashville‘s Juliette Barnes is never better than when she’s taking off her metaphorical earrings and gearing up for a tussle with a formidable foe. That’s why we should all bow down and kiss the petite pop-star feet of one Ms. Jade St. John.

Because if the former-almost-Mrs.-Fordham hadn’t come to town with her Jem-and-the-Holograms hair and her improbable cheekbones, we never would have seen Cadence’s hormonally unstable mommy spout off in a tirade containing the phrase “Country Barbie jacket.”

Even though we’re supposed to see the outburst as evidence of Ju’s emotionally frayed new mommyhood, I don’t know — I kinda dug it. Nice may not be Juliette’s color, but bitch certainly brings out her eyes.

PHOTOS May Sweeps/Finale Preview! 100+ Spoilers and Exclusive Pics From Your Favorite Shows

DESTINY CALLING | Everyone’s gearing up for Teddy’s Note By Note fundraiser, because apparently the Feds are willing to wait a week to haul the mayor away for his various misdeeds if it means a chance to hear Deacon, Rayna, Maddie and Daphne perform together. But even though the Von Claybourne Family Singers rehearse a very awesome version of “This Time,” the fundraiser’s audience never sees it: Just as the benefit is about to begin, Deke gets a call that a donor liver is available. So he, Rayna and Maddie skip off to the hospital, while the other kid Daphne laments that she really wanted to get up on stage and do her thing.

Juliette, recently returned from her Los Angeles jaunt and surprised to see Avery’s mom replacing the nanny she hired, is at the event, too. Ju seems far more concerned with Highway 65 winning an auction for a command performance — meaning she’ll get up on stage and croon a tune, proving to the haters that she’s back, baby! (But not back-with-a-baby, because she’s totally the same old Juliette you know and love and LAY OFF HER ALREADY WOULD YOU?) But after a ladies’ room meow-fest with Jade (who’s there as a guest of Luke’s), Highway 65 loses the auction when Ms. St. John just keeps upping the bid. And who does Jade want to sing? Her new buddy Layla. So Layla sings and Juliette drinks her cocktail and plots deaths. (Side note: We don’t see the former. We definitely see the latter.)

On a less snarly note, Luke does Teddy a solid and invites Daphne up on stage to sing with him. They do Jon Hiatt’s “Have a Little Faith in Me,” which is a lovely way to give Maisy Stella a moment of her own. Goodness gracious, does this child take it to church on the second verse or what? The crowd is impressed and the whole thing even gives me mildly glowy feelings about Luke. Nice job, Nashville.

MANIC MAMA | A ticked-off Juliette and a newly arrived Avery — there on a tip from his mom, who offers some very reasonable advice to her son while cradling what is either a very obvious prop baby or the world’s shiniest-headed child actor — make for the exit after the auction. But then Jade gloats, and Ju gets nasty, and people notice. While Jade cries to Luke that she’s never going to be able to impress the country crowd, little Cadence’s parents go home and argue about how Juliette’s gone a bit rogue lately. Avery says she makes all the decisions (including about quitting breastfeeding) on her own, and he winds up with an exasperated, “What the hell is wrong with you?” 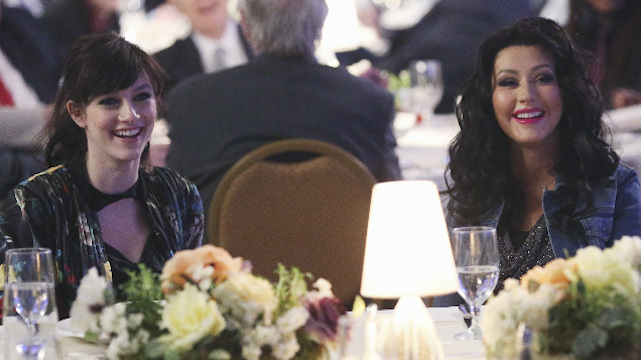 When things have cooled, Juliette puts on her sweats, takes off her makeup and apologizes. “I just don’t really understand everything that’s going on with me,” she explains, and Avery reassures her that she’ll still be able to have an amazing career. Still, that doesn’t seem to be much comfort as Ju cries in bed next to her sleeping husband. Looks like we’re heading for a post-partum depression storyline here, no?

Across town at The Bluebird, Luke pulls strings so Jade can perform a country tune and earn some serious Music City cred. She sings one of his old hits, “Shotgun” (which I loved); if you weren’t already aware, the man up there with her is Nashville music boss Buddy Miller. The crowd loves her. And it appears that Luke doesn’t think she’s half-bad, either, because he talks his way into her hotel room later that night.

LIVER? I BARELY KNOW ‘ER! | Over at the hospital, Caleb is the bearer of unfortunate news: Deacon has a temperature, which means he may not be able to receive the donor liver. Sigh. For years we’ve know Deacon was hot; why must the proof of said hotness be his undoing?

But wait! It’s only a sinus infection! Everything’s great! Transplant on! Deke even has time to dish out some romantic advice to Scarlett before he’s wheeled into surgery. Deacon points to his past with the First Lady of Hiding Paternity From Him, using it as an example of how rough emotions can make great songs. Rayna’s marriage to Teddy was tough, Deke elaborates, “but I dealt with it so we could keep making that music.” Only because you’re about to go under the knife, Deacon, will I allow such a shameless whitewashing of your romantic history with Red.

Rayna kisses her man just as he’s taken into the surgical suite, but it’s all for naught: When he wakes up, Caleb informs him that the donor liver was cancerous, so there was no transplant. While Rayna’s in the hospital chapel, weeping and praying for help, Deacon and Maddie have a brief, devastating scene up in his room. “Please tell me you’re not going to die,” she begs, crying. “Baby, I can’t,” he responds, utterly undone in an instant, and they cling to each other, sobbing, in the episode’s hardest-to-watch, truest-to-life moment. (Charles Esten, ladies and gentlemen.)

‘SHOTGUN’ BEDDING | High off her performance at the benefit and her newfound kinship with Jade, Layla informs Jeff that she’s going to tour with the pop star. He warns against it, saying that his ex uses people up and then tosses them aside. After Layla’s anger dies down, she finds him at his favorite bar and promises that she’s different. “I’m not going to throw you away,” she says, kissing him and starting a public makeout sesh that’s a wee bit intense. Not in front of the seabreeze, kids!

Speaking of intense, Will and Kevin have barely come up for air in the four days since they first kissed. But Will really doesn’t like it when Kevin brings a sidepiece to the benefit, so he shows up at the songwriter’s place and makes an earnest plea that they have a monogamous relationship “while I figure this out.” Kevin agrees and invites him in, and Will perks up like a golden retriever who hears his owner rummaging in the treats bag.

Oh, and Scarlett and Gunnar are going to make a go of it as a duo. I’m sure that will be totally complication-free and won’t lead to anything romantic, right?