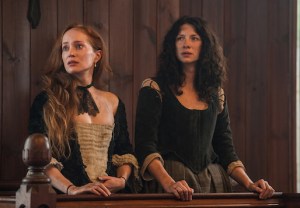 And darkness. And seeping damp. And the bone-deep certainty that death is but a few hours away.

What are: Things Encountered in the Thieves’ Hole by Outlander‘s Claire, Who Maybe Should’ve Listened to Jamie and Kept Away From Her Sketchy Friend Just This Once?

There’s so much ground to cover, we canna waste a minute. So let’s get right into reviewing the big stuff that happens in “The Devil’s Mark.”

LOOKING BLEAK | We pick up with Geillis and Claire getting dumped into the aforementioned hole in the ground, where they’re left to await their trial in the morning. Mrs. Fraser is quite unhappy with her redheaded frenemy, who proudly confesses that she started poisoning Arthur with arsenic months before he died. Claire rips a hole in Geillis’ sanguine attitude when she informs her that Dougal’s been sent away, and Jamie is on the trip with him. “No one is coming, Geillis,” Claire growls.

The next day finds them manacled and hauled into the Cranesmuir church. It’s probably a bad sign that the townsfolk are already building a huge stake outside, no? (“Is that what I think it is?” “Well, it’s not a maypole, Claire.” Heh.) A pair of angry-looking examiners will decide whether the accused are witches or not; the rowdy crowd that has gathered already seems to have made up its mind.

BETTER CALL NED | The “trial” is barely underway — yet somehow already going tits-up for Claire and Geillis — when Ned Gowan bullies his way into the proceedings and sweet-talks the examiners into letting him represent the pair. You can see a spark of hope light in Claire at the geezerly lawyer’s appearance, though the glow wavers like a birthday candle near a ceiling fan as witness after witness arrives to speak out against Lady Broch Turach and her pal.

The Duncans’ housekeeper. The mother of the dead baby on the fairy hill. A guy who says Geillis can fly “like a great winged bird.” Ned shuts (most of) them down artfully. (Side note: It’s a treat to see this character in his element. You may be asthmatic and ancient, Mr. Gowan, but you’re the Billy Flynn of your day.) When the proceedings adjourn for the day, Ned manages to slip Claire two things: a flash of whiskey and the knowledge that he’s there on his own (translation: Colum didn’t send him, and the clan chief actually might’ve had a hand in the arrests).

GEILLIS’ FIRST CLUE | Back in the thieves’ hole AKA the worst sleepover ever, Claire and Geillis pass the booze while Geillis spills all about her evil plan. Here are the basics; if you want a more authentic experience, read them aloud in a Scottish accent while making crazy eyes and swilling Macallan 18. Geillis has diverted a lot of money from Arthur in order to restore “bonny Prince Charlie” to the Scottish throne. (I loved the exasperated tone of Claire’s voice when she cried, “You’re a bloody Jacobite?!”) Geillis’ love for the mother land is part of why she’s so enamored of Colum’s brother: “Dougal fights for all of Scotland.”

When Geillis grandly states she’d do it all over again, Claire snarks out the Nathan Hale quote, “I only regret that I have one life to lose for my country” — and take careful note of Mistress Duncan’s face there, aye?

YOU AGAIN | Sunrise brings a return to court and, likely, a really terrible death. First, though, something even worse: Laoghaire. She saunters into the church like she’s not a complete piece of rancid haggis, then cries big, fat, stupid, fake tears down her stupid, fake face as she weaves lies about Claire’s time at the castle. (Well, not the part about getting slapped. That one’s true. And it’s awesome.)

Not even the parish priest tearfully confessing that Claire saved a boy he had dismissed as possessed (the mushrooms kid from earlier this season) works to move the crowd; as Ned informs his clients during a brief recess, Claire will need to publicly renounce Geillis in order to save herself — otherwise, they’ll both burn.

When he steps out, the redhead demands to know, “Why are you here in Scotland?” And when Claire starts to recite her cover story, Geillis yells, “Stop lying!” Once Geillis has ascertained that Claire arrived via some kind of accident, she seems to make up her mind. “Looks like I’m going to a f–ing barbecue,” she scoffs… and remember how Jamie didn’t know what that word meant?

IN WHICH THINGS GET INSANE | What happens next happens quickly, so stay with me. Claire refuses to name Geillis as a witch, so they’re both condemned. Ned jumps up and tries to defend them with a pistol, and the already riled-up crowd goes insane. Geillis takes advantage of the audience’s momentarily distraction to whisper, “The question you had before, I think it is possible: 1968.” Before Claire can even think “huh?,” she’s bodily removed from the witness gallery, her bodice is split up the back and she’s whipped right there in the church!

She’s crying. The crowd is frothing. Wait, who’s that at the back of the room? Oh, just one James Alexander Malcolm MacKenzie Fraser, who rushes to his wife’s side, knocks down the men holding her and keeps everyone away with a sword in each hand like the ginger badass that he is.

But if Jamie’s entrance was the opening act, Geillis is about to bring down the house. In short order, she declares herself a witch who’s pregnant with Satan’s spawn, points out a scar on her upper arm as “the devil’s mark,” then illustrates her sinfulness by stripping to the waist and baring Dougal Jr. (and a lot more) to the masses. Moments before she’s hoisted aloft and carried outta there like an overserved undergrad at Coachella, she says one word to Claire, “Run.” (I loved that the series kept that moment from the book in the action.) While Geillis and her kicky little red shoes are paraded through the street, Jamie and Claire make their getaway.

YOU CAN HANDLE THE TRUTH? | Once the Frasers are a safe distance from the mass hysteria, Jamie bathes Claire’s cuts, determines them too shallow to leave scars (and he’d know), then calmly asks if she’s a witch. After all, he points out, he’s seen the “devil’s mark” on her arm, too.

“I’m not a witch, but maybe after you hear the truth, you’ll think otherwise,” she says fatalistically, then launches into a discussion of vaccines, which is probably not the most direct way to tell someone you’re from 200ish years into the future. She’s crying and babbling and finally gets around to mentioning the time travel; Sam Heughan’s face throughout her admission is the epitome of inscrutable. Maybe that’s why when he says he believes her, Claire looks at him like he’s the one who needs some lithium and a nice long nap. (Side note for those of you book readers who’d been waiting for the honesty pledge to show up: Does this scene slake your thirst?) 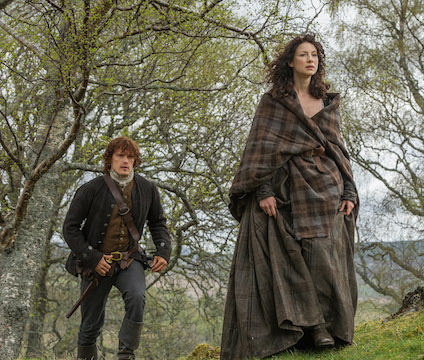 Her relief causes her to talk and talk and talk — it’s like the reverse of their wedding night, but with fewer prospects of Jamie being naked anytime soon. Mixed into her stream-of-consciousness monologue: a brief overview of how bad things are going to get in Scotland in a few years and the realization that Geillis , too, was from the future, namely 1968.

It should be noted that Jamie is taking all of this extremely well. Like, unbelievably well. After he realizes she was just trying to get back to Frank, he even has a moment of chagrin for spanking her. But if I can accept that Claire’s hair looks shampoo-commercial ready after two days of literally living in a ditch, I certainly can accept that her man is able to suspend disbelief in the name of love.

CLAIRE MAKES HER DECISION | They ride for days; in a voiceover, Claire tells us she feels adrift and unable to invest in Jamie’s chatter about his family home, Lallybroch. Maybe you’re not adrift, Claire; maybe you’re just floating because, oh look, your very attentive husband is once again waking you up by giving you a little tickle in the business. (As many of you mentioned last week, James Fraser: World’s Best Alarm Clock.) This scene, of him with his hand working overtime under her voluminous skirts, can’t possibly get hotter, right?

“Mo nighean duinne, I want to watch you,” he whispers, stopping her when she tries to bring him into the party. WRONG. I WAS VERY, VERY WRONG. Jamie helps Claire summit her own personal Munro and there’s lots of not-quite-kissing and high-pitched breathing and her grabbing his lapels and damn, this is a sexy show.

But as it turns out, Jamie was really just creating one last memory, because the next morning he delivers her to Craig na Dun to make the trip back to her time. Jamie mentions all of the things she’ll return to, including Frank. “Frank,” a dazed Claire parrots in precisely the same way you’d say, “tapioca pudding” or “wallpaper paste” or “a cup of warm skim milk.” Ever the pragmatist, Jamie tamps down his feelings, kisses her goodbye and then heads down the hill, where he’ll wait until nightfall to make sure she’s gone safely.

After sitting and thinking for a while, Claire comes to a decision and walks toward a stone… but it’s a fake-out, because she’s actually gone down the hill to find Jamie asleep where he said he’d be. “Take me home to Lallybroch,” she commands after he wakes up, and they’re both smile-crying as he grabs her and kisses her. Bravo, Outlander: I’ve been waiting decades to watch this scene play out, and you didn’t disappoint me one bit.